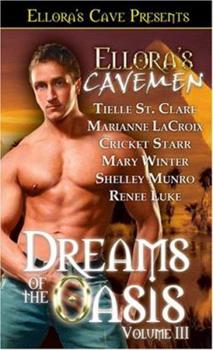 (Book #3 in the Dreams of the Oasis Series)

Dreams of the Oasis Volume I includes the stories: Call Me Barbarian By Liddy Midnight, Dragonmagic By Allyson James, Fallen For You By Paige Cuccaro, Spontaneous Combustion By Nicole Austin, The Ambassador's Widow By Myla Jackson, and The Joining By Jory Strong

Dreams of the Oasis Volume 3

Published by Thriftbooks.com User , 13 years ago
Pleasuremaid by Cricket Starr When a woman falls unconscious at his feet in front of his house, Galleanus Ell Vanant knows that he has to take care of her. But it has been a long time since he has been so tempted by a woman. He has been falsely accused of a crime and locked up with a compulsion to never find release inside a woman. Dina has no memory of what happened to her, she only has her name to cling to, her name and Gall. As she finally remembers her true purpose, will Gall still want her when he finds out the truth? Pleasuremaid is a great story and I enjoyed reading it. Dina is an exceptional woman, and watching her loyalty despite the pain it may cause her made me want to root for her even more. Overall this was a lovely read, and while I was slightly disappointed at some of Gall's actions when reading, he more than made up for it at the end! Tempt Me Twice by Renee Luke Latoya Ross needs to find a way to tempt her husband, Dante, back into her arms or she might have to consider a divorce. Four years ago, when they first met, they couldn't keep their hands off each other and now their times of lovemaking are very few and very far between. When she goes to his office at lunch to surprise him, things quickly heat up again. For Dante, keeping away from Toya after suspecting she wanted space for the last few months has been very hard for him, literally. But when he finds the divorce papers she has hidden, he is shattered. Can they both fix their marriage, before it is too late for them? Dante and Toya are one incredibly hot couple! I loved their play together and I loved the intensity of their relationship. Their pain as they deal with the possible end of their marriage is palpable and so is their love for each other. Tempt Me Twice was my first taste of Renee Luke, but it won't be my last! Werewolf in L.A. by Marianne LaCroix It is 1941 and Estelle Lane is a B-movie actress in Hollywood. Her latest project is to act in a werewolf movie where she meets Jack Butler, the new stuntman for the studio. Immediately drawn to him, she can't understand her instant attraction. After watching Estelle for two years, Jack has finally been given a chance to meet her in person. But he is afraid of his passion for her. His wolf is clawing to get out and dominate her, but will Estelle accept that he isn't only a wolfman in the movies? I simply loved the premise in Werewolf in L.A.!! As a long-time fan of the classic era Hollywood monster movies I found so much enjoyment in the fact that Jack, a werewolf in real life, would play a werewolf in a movie. Estelle is a perfect match for him, and I enjoyed every minute of their story. Priestess of Desire by Mary Winter Daphine Shalwood is chained up in the bedroom of Prince Sethe Cavelblood, heir to the Pyndaria throne. She needs to give him her maidenhead in order to complete her training as a priestess of Zudiat. Her last ritual before she will be cloistered in the temple

a scorcher of a book

Published by Thriftbooks.com User , 15 years ago
PLEASUREMAID by Cricket Starr Dina wakes up alone and with no memory of who she is or how she ended up in the prison garden. Since it's raining and she's soaked, she walks to the nearest building. When Gall opens the door she is stunned to realize that she knows him even though they've never met before. She soon realizes that Gall has a strange sexual problem that she'd love to help him solve. As her memory begins to return, she learns that she is much more than an ordinary woman and Gall is in danger. Cricket Starr writes an intriguing story that readers won't be able to put down. Dina and Gall are so perfect together that you wait anxiously to find out exactly who she is and how it will affect Gall. TEMPT ME TWICE by Renee Luke Latoya fears that her husband has fallen out of love with her and their marriage is over. He's started getting up early every morning to go to work and sleeps with his back to her. There are no more nights of passion and not even any morning quickies. She's determined to do everything in her power to keep him. Will she be successful or will they be another divorce statistic? This one is for every married couple who has ever felt that the spark has gone out of the marriage. Renee Luke pens a heartfelt tale that will have the romantic in all of us longing for a little one on one time with our significant other. WEREWOLF IN L.A. by Marianne LaCroix In 1941 B-movie actress Estelle Lane is in the prime of her movie career acting in the movies she loves. She can't stand the leading man who has been paired up with her both on and off the screen by the studio. Jack, the new stuntman who's playing a werewolf is an unexpected treat. He makes her body hum even before they really know each other. Will she be as attracted to him when he reveals the true nature of his beast? Marianne LaCroix puts an interesting spin on those old werewolf movies with this spine tingling tale. Estelle and Jack are a couple that will install hope that there's a special somebody out there for everyone. PRIESTESS OF DESIRE by Mary Winter Daphine's lifelong goal is to become a priestess of Zudiat. She only has to go through with the sacred ritual in which she will give Prince Sethe Cavelblood her virginity. Only one night is not enough. Daphine craves Prince Sethe's gentle loving. Sethe must find a suitable wife, but the only woman he wants is Daphine. Will he be able to convince her to give up being a priestess to become his wife and future Queen? Mary Winter tells a hot tale full of a passion that transcends lifelong goals and duties. Both Daphine and Sethe have certain expectations placed on them that seem like they'd be impossible to overcome. SUMMER LOVIN' By Shelley Munro Sophie is on vacation in Australia when she meets up with her daughter's ex-boyfriend, Isaac Shepherd. At first she didn't recognize him and her body rejoiced at the thought of getting lucky, but the age difference and the fact that he dated her daug
Trustpilot
Copyright © 2022 Thriftbooks.com Terms of Use | Privacy Policy | Do Not Sell My Personal Information | Accessibility Statement
ThriftBooks® and the ThriftBooks® logo are registered trademarks of Thrift Books Global, LLC