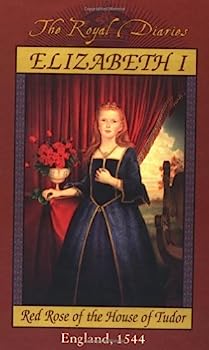 Elizabeth I: Red Rose of the House of Tudor, England, 1544 (The Royal Diaries)

England, 1544. In her diary entries, Princess Elizabeth, the eleven-year-old daughter of King Henry VIII, celebrates holidays and birthdays, relives her mother's execution, revels in her studies and... This description may be from another edition of this product.

A few mistakes, but a wonderful book! A great read!

Published by Thriftbooks.com User , 15 years ago
Though it has a few mistakes, it is still a great book that offers a facinating glimpse of the Tudor Court. If you loved this book I recommend "The Young Royals; Beware, Princess Elizabeth" by Carolyn Meyer.(This book starts where the "Royal Diaries" one ends.)"Mary, Bloody Mary," is a long-overdue story of Mary's childhood, and is essenstial to understanding Mary I. All of the Young Royal Books are wonderful! If you enjoy reading about Elizabethan England, there is also a great series of books called "The Lady Grace Mysteries," that you might enjoy. As for the mistakes, they do not detract from the story, but I would like to clarify a few things: 1. Anne Boleyn's Badge had a falcon, not a large cat. 2. Mary Tudor was not as evil as this book depicts. She helped take care of Elizabeth when she was a baby. When she had her title and respect taken away from her, she was a young woman of seventeen, and forbidden to see her mother. There is evidence (Such as letters,) that Mary was quite fond of Elizabeth when she was a child, but as she grew older, I think Mary saw her as a threat. (Privately, I also wonder if she was not a little jealous of her brilliant, beautiful younger sister?) 3. Elizabeth and Mary actually liked Lady Jane Grey. As Jane states in the book she was slapped and pinched and hit by her parents. Unfortunately for Jane, there were no Child Protective Services in Tudor England. 4. Anne Boleyn was not a witch, just a very independant, strong-willed woman, though Henry VIII grew to believe his own story (That she had "bewitched him,") to get rid of Anne after the birth of a stillborn son in 1536. Just days after the execution, Henry VIII married Jane Seymour. That being said, enjoy this book! It is a treat for all ages!

Published by Thriftbooks.com User , 18 years ago
This book is about Queen Elizabeth 1st of England. Kathryn Lansky, who wrote this book, Elizabeth 1st, Red Rose of the House of Tudor, chose to write it about the time when Elizabeth was a girl in England, in the years 1544-1547. I like the way the author wrote this book in diary form. Each new day had its own date and year (except for a few dates in which the printers messed up). I also enjoyed the pictures in the back of the book that show Elizabeth and her family. It helps you get a view of how fat King Henry the Eighth really was. I also thought the gold color at the edges of the pages was very beautiful. This book tells about the way of life when Elizabeth was 10 to 13 years old. It tells how she lived, what she wore, and what she did, in a very interesting and exciting way. It really gives you a great idea of what her daily life was like. This book also tells of the sad times and hardships that Elizabeth suffered, like the time she was banished from her father's court for doing nothing wrong. That really hurt her feelings. What I think would have hurt her feelings the most was knowing that her father had beheaded her own mother, Anne Boleyn. Kathryn Lansky really captured the feelings that Princess Elizabeth must have felt with all these hardships. She also described the happy times in Elizabeth's life, like the time her father would kiss and pinch her on her cheek. That made her very happy. Another time, on Elizabeth's birthday her half brother Edward gave her a monkey to play with and train. She liked that a lot! It was really neat to learn about Princess Elizabeth, and discover more about daily life back then. I enjoyed this book a lot, and I know you will too!

Elizabeth I, diary of a future queen

Published by Thriftbooks.com User , 20 years ago
This is my favourite Royal Diary so far. A close second might be Cleopatra's. Elizabeth I was the daughter of one of England's most famous (better or worse) Kings, Henry VIII. She too, is England's most popular female monarch. In this diary, an eleven-year-old Elizabeth feels forgotten and deprived of her father's love in 1544. She names herself, the "forgotten princess". Even Mary (future Mary I aka Bloody Mary), her much older half-sister, gets more attention than Elizabeth at times. Elizabeth retells her days, living in various castles of 16th century England with her sister Mary, her young toddler brother Edward, Kat, Elizabeth's governess and many other friends. Elizabeth's insightful young view talks about her father's many wives, including her own mother. Elizabeth and her friend Robin are sometimes hearing the ghostly cry of Henry's 5th wife, Catherine Howard, beheaded for adultery. Elizabeth is constantly mourning her step mothers and her own birth mother, Anne Boelyn. Who was scrutinzed as being a witch, making her unpopular among the people and in the end, Henry. She was beheaded for witchcraft and adultery, both are wrong accusations. Elizabeth's new step-mother, Catherine Parr, tries to establish a good relationship for the children and their father while giving them a good education. Elizabeth likes this new stepmother and tries to make sure she doesn't share the fates of the other 5 wives.Mary, seems very diabolical in this book and it is very worthwhile to read this adaption of their early relationship. Mary says bad things about Elizabeth's mother infront of her and tries to make Elizabeth look worthless infront of many others. While Edward, their younger half-brother and a future King as well, is devoted to Elizabeth and loves her very much. This is the best and probably one of the most accurate books in the Royal Diaries series. The historical note and the epilogue at the back are very accurate and informative to any young reader. This is a real and believable adaption of Elizabeth's young life before her queen-hood. If you read ANY of the Royal Diaries series, it should be this book. If you should buy ANY of the series, it should be this one. It is well written, portrayed and informative.

Elizabeth I : Red Rose of the House of Tudor

Published by Thriftbooks.com User , 21 years ago
I read this book over and over without once tiring of it. The diary of Elizabeth I, who is possibly England's most famous queen, provides an interesting insight into eleven-year-old Elizabeth's life as a "forgotten princess." She has many needs, and the greatest one is a need for her father's love. Her father is Henry VIII, the English king notorious for having six wives, whom he either beheaded or divorced in succession (with the exception of the last wife, Catherine Parr, who outlived him). Elizabeth calls herself a "forgotten princess" because her father's love for her does not manifest itself as clearly as his affection for Edward, her younger brother, or Mary (later known as the infamous Bloody Mary), her pious older sister. Though her diary mainly centers around her quest for her father's love, there are hundreds of other intriguing details about life in medieval England. There is Elizabeth's determination not to marry after seeing the ultimate fates of each of her stepmothers in succession. Her own mother, Anne Boleyn, was beheaded after being accused of infidelity and witchcraft (neither accusation was true). Elizabeth was only a toddler at the time, so she never knew her mother. She does, however, respect and like stepmother Catherine Parr as she would a mother. Mary is also a major character in the book. A strict Catholic, Mary's religion is directly at variance with the Protestantism of much of England. Mary could be described as pious. Insane is more apt. Mary delights in telling Elizabeth depressing, cruel, and gruesome details about Elizabeth's birth and Anne Boleyn's beheading. Even Mary's jester agrees with Elizabeth that Mary isn't "quite right in the head." Edward, however, is a very devoted younger brother to Elizabeth, although he is not in the best of health. Edward, who is a slightly overweight boy, is constantly criticized by his grotesquely obese father for being inactive and for tiring easily. I awarded this book five stars because I think it accurately portrayed every infinitesimal detail of Elizabeth's life and surroundings, as well as being historically correct (unlike some of the other books in this series).

A fictional diary kept by Elizabeth I as a young girl.

Published by Thriftbooks.com User , 21 years ago
Princess Elizabeth, daughter of King Henry VIII of England, may live a life filled with comfort and luxury, but she is desperatley lonely. The year is 1544, and eleven-year-old Elizabeth is mostly ignored by her father. Most of the time, she lives in a palace in the countryside with her older half-sister, dour Princess Mary, her younger half-brother, sickly Edward, their stepmother, Queen Catherine, and their servants. Only Kat, Elizabeth's governess, seems to pay any attention to her. Elizabeth mourns the death of her mother, who she barely knew, and the deaths of two of her stepmothers. She wonders if her father truly loves her or views her as a political tool that he can someday marry off to gain land or wealth. I highly reccomend this book. Not only is it a richly detailed account of life in 16th century England, but it also a story of a lonely young girl yearning for her father's love.
Copyright © 2022 Thriftbooks.com Terms of Use | Privacy Policy | Do Not Sell My Personal Information | Accessibility Statement
ThriftBooks® and the ThriftBooks® logo are registered trademarks of Thrift Books Global, LLC