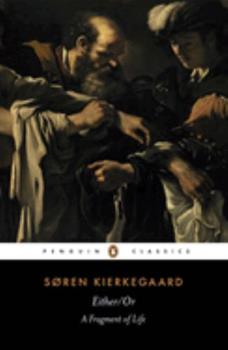 Either/Or: A Fragment of Life

(Part of the Samlede Værker Series)

In Either/Or, using the voices of two characters - the aesthetic young man of part one, called simply 'A', and the ethical Judge Vilhelm of the second section - Kierkegaard reflects upon the search for a meaningful existence, contemplating subjects as diverse as Mozart, drama, boredom, and, in the famous Seducer's Diary, the cynical seduction and ultimate rejection of a young, beautiful woman. A masterpiece of duality, Either/Or is a brilliant exploration...

It's not one or the other

Published by Thriftbooks.com User , 13 years ago
Either/or is two parts in which Kierkegaard used different false names or pseudonyms. The first part discusses the aesthetic or personal experience, where imagination is the most powerful factor of aesthetic pleasure. For the aesthetic, imagination is the only way to break the boredom barrier just as Don Juan avoided repetition of the love act with the same woman in order to break the dullness of repetition. In that way, the aesthetic hunger for pleasure leads to the same void of repetition by seeking a way out of it. Not to spoil the book for readers, but the last section of the first part of either/or "the diary of the seducer" is a very interesting diary in which the character tries to avoid the climax of a relationship with a woman he desires because of the fear of emptiness in relationships. Imagination to the seducer is the only way to maximize his aesthetic pleasure, while the success of the seduction will definitely end the adventure and the prey should be replaced by a more difficult one. The second part, which deals with the ethical, or supposedly a higher form of existence, takes the form of letters written by different characters as a response to the first part where reason not seduction is used to defend values, relationships, and the pleasure of having a monogamous soul mate. The argument in this section promises greater fulfillment from devotion to higher morals which ultimately lead to a deeper aesthetic pleasure. It's widely thought that the discussion of the aesthetic and the ethical is a reflection of Kierkegaard's own confusion, especially after ending his engagement with the love of his life Regine Olsen, just as the seducer of either/or did. I, personally, think that Kierkegaard's either/or is a mature analysis of human nature and acknowledgment of both ethical and aesthetic sides of each individual. Kierkegaard shows the inconsistencies of both positions, the void in human reasoning in both cases and eventually he acknowledges that faith in God is the only way to avoid unhappiness. While Kierkegaard acknowledges religion on a personal level, he still condemns it on a society or church level. Either/or might be a projection of Kierkegaard's own spiritual and philosophical beliefs, or a result of his own experience with loved ones, or an act of frustration against society and church. In any case, I think either/or, though a difficult read, is a very engaging interesting work that deserves your time and attention.

Published by Thriftbooks.com User , 19 years ago
there is a countervailing advantage this edition offers against the princeton volumes even though its abridged... this is a lighter and smoother English translation. English is not my native language, but I believe many American readers would find the Hong translations as tough-going as I did (even if meticulous). Kierkegaard is already very wordy so this translation is a pain reducer.

Are You Already Seduced?

Published by Thriftbooks.com User , 21 years ago
When you are a young, attractive, seventeen year-old girl, you are the perfect bait for Johannes. Johannes falls in love with Cordelia. At first, his feelings are rather 'normal' - others who fall in love would most likely feel similarly towards their beloved. However, there comes a point when Johannes is unable to control his feelings - his 'crush' becomes an obsession. He is in search of a drama, and strives to be the director of his own play. He invades Cordelia's privacy by spying on her, and befriending her aunt. Johannes even attempts to bring in a third party candidate to win Cordelia's heart - an attractive young man named Edvard. Johannes succeeds. He is a master of manipulation. When Johannes' plan begins to backfire, Edvard is getting too close to Cordelia's heart for Johannes' comfort, he does the unimaginable - he proposes marriage to her! Cordelia refers him to her aunt, who is delighted because of the admiration she has for Johannes. Perhaps she wished him for herself? Nevertheless, Edvard is crushed. Johannes has no mercy, he finds Edvard's despair as humorous as the concept of engagement itself. This is where the story reaches its climax, and plummets from that of a romantic comedy to a devastating tragedy. Johannes' plan is to have Cordelia call off the engagement. However, he will not do this right away. Oh no! He must get her to her erotic peak, he must posses her soul, her self, before he will crush her. The seduction is referred to as several different things throughout the story. My personal favorite: "The web into which she is spun." Johannes and Cordelia begin a letter correspondence that is filled with symbolism and foreshadow. Cordelia signs her letter "Your Cordelia," and Johannes begins his with "My Cordelia." It is clear that he wants to posses her, and perhaps she is too innocent to know otherwise. I suppose that it would be fair to say that she basically hands herself over to him in writing. At the height of their romance, Johannes consciously destroys her. He retuns the letters that she has composed to him unopened. She may be young, a beginner in love, but she is not unwise. She realizes that she has lost herself to him; he has won the battle. Kierkegaard wrote his book "Either/Or" using his real name, Soren Kierkegaard. However, the section entitled "The Seducer's Diary," was written as by a pseudonymous author: Johannes. Perhaps this was a form of indirect communication for Kierkegaard. It makes perfect sense, for "The Seducer's Diary" is based on Kierkegaard's own romance with Miss Regina Olsen. However, this is where the concept of irony steps into the story. In real life, it was not Regina who broke off the engagement, but rather Kierkegaard himself! Perhaps writing the piece pseudonymously was a way for Kierkegaard to control a situation he ultimately never had control over - it was his way of directing his own play. Why did he need to do this? Simple:

What is the effect of the operationism?

Published by Thriftbooks.com User , 22 years ago
The most famous part of this book is "The Diary of a Seducer", which has rarely been discussed. It is, however, the beginning and motif of his thinkings. If the relationship between people, that is, the love is the target of the operation, what has happened? His answer is the despair and anxiety. The rest important papers are the consideration of these results.

challenging, but well worth the effort

Published by Thriftbooks.com User , 22 years ago
for the most part, it goes without saying that pure philosophy texts make for difficult reading. To a great extent, kierkegaard is no exception. However, I would highly recommend this book for anyone struggling with questions of faith, particularly those involving the relationship between god and man. For me, the most valuable part of the book was the author's clear conflict and passion for the issues. It seemed to me that he was not trying to write as some great philosopher-king trying to bring light to the poor suffering masses, but as a sincerely conflicted human being, down in the trenches with the rest of us, just trying to understand what it all means. In short, although the style may be a little hard to wade through at times, it is a thouroughly thought-provoking and insightful book.
Trustpilot
Copyright © 2022 Thriftbooks.com Terms of Use | Privacy Policy | Do Not Sell or Share My Personal Information | Accessibility Statement
ThriftBooks® and the ThriftBooks® logo are registered trademarks of Thrift Books Global, LLC