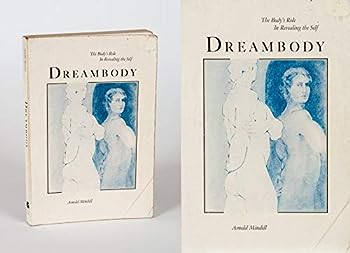 Dreambody: The Body's Role in Revealing the Self

Introducing the concept of meaningful connections between nighttime dreams, myths, and body experiences, this work traces attitudes toward the body in Eastern and Western thought and illustrates the... This description may be from another edition of this product.

Published by Thriftbooks.com User , 19 years ago
One gets the impression that while Mindell is a master at working with the dreambody, he is not quite as good at writing about it. I could well conceive that this is because the dreambody defies a certain degree of rational, verbal understanding.Mindell's writing style is fluid, refreshingly down to earth and modest, clear and usually quite accessible. The fault I find with the book is in its focus and formatting. He sometimes seems to shy away from his primary topics, and we find ourselves reading some tangential fairy tales and a slightly muddled, repetitive explanation of the dreambody in the context of physics.Nevertheless, the ideas that Mindell offers us here are powerful, transformative, ancient, beautiful, and accessible. His description of the dreambody is not absolutely full and clear, (p 164: "...the dreambody is composed of all the different degrees of awareness. It has both physiological and dream aspects which are easily differentiated from one another, and it possesses an inner dichotomy which I have variously described...as temporal and nontemporal..." etc.) However I think that many people will read about his concept and say to themselves, "Ah yes, I know what he's talking about!" And fill in the blanks with their own experience. It is an invaluable concept.His final chapter "Working with the Dreambody," however, is altogether fantastic. You do not need to be chronically ill to find his methods of magnifying a feeling or illness, in order to find out its message, extremely useful. His method may sound obscure in this review, but here Mindell is at ease in his writing, and in reading this chapter I think the method becomes quite clear.Immediately after finishing this book I read "The Shaman's Body" also by Mindell. There he writes with greater confidence and thoroughness, but the books really are quite different, so one cannot replace the other.Overall, I am tremendously impressed, and grateful to Mindell for sharing the insights he's been given with all of us.
Trustpilot
Copyright © 2022 Thriftbooks.com Terms of Use | Privacy Policy | Do Not Sell My Personal Information | Cookie Preferences | Accessibility Statement
ThriftBooks® and the ThriftBooks® logo are registered trademarks of Thrift Books Global, LLC