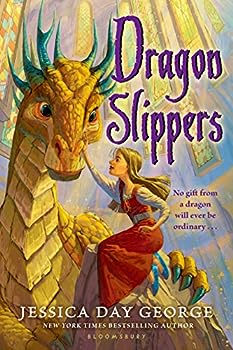 (Book #1 in the Dragon Slippers Series)

This enchanting tale of dragons, betrayals, and the power of friendship is the first in a charming and thrilling series by New York Times bestselling author Jessica Day George. Creel can't believe her... This description may be from another edition of this product.

Published by Sunsess , 7 months ago
Romance, dragons, and embroidery. What an odd combination. It's almost as if this book was written for me. <3 I loved Dragon Slippers. Though the inspiration no doubt came from a bunch of classic fairytales the story was unique enough to be its own entity. I liked that the writer wasn't afraid to make certain characters evil, though I would've liked more of an explanation as to why they were that way. It was good to know every character was fair game. My favorite part was the embroidery and stained windows. Both bring back pleasant memories for me of spending time with my grandmother, painting those plastic window hangers and learning basic threading stitches. I suppose this wouldn't be as appealing to someone who has no backstory with these skills, but people interested in art and decor should still find it somewhat enjoyable. If you've never heard of embroidery, I encourage you to look it up. I didn't give the book five stars because the writing style didn't feel organic, and I wasn't particularly fond of the way the story wrapped up. Some of it felt too good to be true, and while I don't mind suspending my belief, the book would have ended on just as much of a high note if some things were left out. Not every dead character has to come back to life, not every villian has to die a horrible death, etc. and if you do go that route, it needs to feel like it was planned all along, not - I've got three pages left, kill the witch! I highly recommend this book for anyone who likes fantasy, fairytales, innocent romance, or large hoards of dogs raised by cowardly dragons. I wonder if there's a dragon that hoards cows...

Published by Thriftbooks.com User , 6 years ago
These books are awesome! I'd definitely say it's geared most toward middle/early high school readers, but I'm twenty-something and i still enjoy them. It's got all the good bits of action, romance, struggles (and overcoming), humour, and freaking dragons am i right? Everything in you roots for this heroine during the whole series. Definitely a great read!

Published by Thriftbooks.com User , 14 years ago
What do you get when you mix a sassy damsel, dragons who hoard everything except gold, and some fancy slippers? A page turning fun tale similar to the PRINCESS BRIDE meets DRAGON RIDER. Creel's aunt suggests sacrificing her to the local dragon in order for the family to get financial gain. True a dragon comes but he's nothing like the village tales. First, he doesn't care to eat humans. Second, he doesn't hoard gold but other things. One of which is shoes. Creel asks for a pair and the dragon lets her have them. Creel goes to the King's city to get employment as a seamstress. But something is going on with the slippers. Her feet itch something terrible but she ignores them. Once in the city she ends up stepping on the spoiled queen to be, Amalia's, dog. Needless to say Amalia doesn't care for Creel. But the princess doesn't like anything. Nothing that is except Creel's slippers, which she says she'll get. Little does Creel know that she holds the secret to either peace or destruction for her kingdom. I really got into this tale. I'm not one for dragon stories but this story kept my interest from the very first page. Creel is spunky and doesn't like it when others, including snotty Amalia, put their noses down at her because she's a common villager. Creel meets others in her travels. Marta, another seamstress with dream of opening her own dress shop. Luka, the younger prince, who is interested in Creel. Shardas, the dragon who's friendship means alot to Creel even if this means she has to put her life in danger to protect him and the other dragons. This is a fun tale that reminds me of PRINCESS BRIDE. Readers who love dragon tales with a twist will especially love this story. Now I can't wait for the sequel.

Published by Thriftbooks.com User , 15 years ago
Creel is a poor, orphaned, farm girl with a talent for embroidery. When her aunt decides to sacrifice her to a dragon in order to lure a knight or prince who might marry her, Creel sees it as a way to escape her boring life. She doesn't expect to meet a real dragon in the caves above her village, so she is even more surprised when the real dragon doesn't want to eat her. Creel makes a deal to keep the approaching mob away from the dragon's lair if he gives her a pair of fabulous shoes from his hoard. The shoes Creel picks turn out to be the most valuable treasure in all of her kingdom and they enable her to communicate with the dragons. As she sets off on her way to pursue her dream of working in a dress shop in the king's city, Creel is rescued from bandits by another friendly dragon. Creel and the dragon Shardas strike up a special friendship that becomes the centerpiece of the novel. Creel continues on to the king's city where she finds work, friends, and adventure. As the story goes on, Creel discovers that her special shoes have the power to save or destroy the kingdom and she must face the future with bravery. The novel's female characters are spunky, the dragon lore is well-crafted, and the story is a balance of comic and tragic elements. This is a fun first novel from George that would delight fantasy fans of Shannon Hale or Gail Carson Levine.

Published by Thriftbooks.com User , 15 years ago
I grew up hooked on Patricia C. Wrede's Searching for Dragons, et al, and this book was like a wonderful return to childhood (okay, I'm only 25, so it wasn't that long ago, but still). Even as an adult, I was delighted by the clever twists the novel takes and awed by the huge tasks Creel confronts. I loved this book and plan to buy it for all my siblings (who similarly devoured Wrede's series as we grew up).

Published by Thriftbooks.com User , 15 years ago
After glancing at the cover of this book, I immediately felt an impulse to read it. And then I opened it up, and read the first sentence: 'It was my aunt who decided to give me to the dragon.' Ooh, I thought, EVIL aunt. But wait--the second sentence: 'Not that she was evil, or didn't care for me.' Okay, that hooked me. And I stayed hooked for the whole book. In Dragon Slippers, Creel Carlbrun is a poor peasant girl who wants to make her way in the world using her talents for sewing and embroidery. But when her aunt decides to give her to a dragon, and said dragon in turn gives her a pair of unusual shoes . . . things get a little complicated. This book is pure fun. Filled with magic, friendship and a whole lot of dragons, it personifies the perfect fantasy adventure tale. One thing that's fun about this book is that it's a children's book (not YA) with a 16 year old as the protagonist. I'm 16, I love children's books, and when a character is my age it can add to my enjoyment of it. Dragon Slippers is a fabulous book - don't miss it!
Trustpilot
Copyright © 2022 Thriftbooks.com Terms of Use | Privacy Policy | Do Not Sell or Share My Personal Information | Accessibility Statement
ThriftBooks® and the ThriftBooks® logo are registered trademarks of Thrift Books Global, LLC