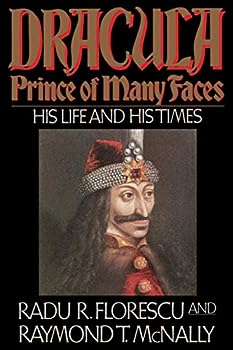 Dracula, Prince of Many Faces

Dracula, Prince of Many Faces reveals the extraordinary life and times of the infamous Vlad Dracula of Romania (1431 - 1476), nicknamed the Impaler. Dreaded by his enemies, emulated by later rulers... This description may be from another edition of this product.

"Stand not between the Dragon and his wrath!"

Published by Thriftbooks.com User , 21 years ago
The world over, Vlad the Impaler is considered a ruthless and bloodthirsty tyrant who butchered 100,000 people just for the sick pleasure of watching them die. Sure, this is absolutely true, and in Romania they say it with pride, where he is regarded somewhere on a level between George Washington and Jesus. A huge chunk of Transylvanian land that Vlad gave to a clan of minor nobles was never made subject to Communist collectivization 500 years later. Maybe Romanians know something we don't. Virtually every movie about him has been a blockbuster and every book a top seller (including the ones that came straight off Gutenberg's press!), but this is one of the few biographies about him. It is also the only one that dares to tell the story of the desperate conditions that threatened his sovereignty. This tells not only the most complete story of Dracula's life, but puts it into context by giving accounts of all the players and politics of the 15th century Eruopean theater. The stories about and around Vlad's life are enough to satisfy anyone's thirst for romance, horror, or history. As he is faced with the incalculable odds against him, one will marvel at Vlad's fast and effective soultions to his multitude of problems. He is, for example, a true pioneer in the fields of chemical and germ warfare on the battlefield. Domestically, the tales concerning government reform, rearmament, Transylvanian justice, and what could be termed as the first "barbecue for the homeless," are both horrific and hilarious. No book about the condition of Dracula's death can ever compare to the story of his life.

THE Definitive Book on the Man Behind the Myth

Published by Thriftbooks.com User , 21 years ago
In an earlier review I wrote regarding Dr. McNally's work on Robert Louis Stevenson, I noted that I had been a student of his in college. In reviewing this book, rather than discuss the meat of what lies within, I thought I would relate a couple of stories related to me by Professor McNally.The first is that the opening of Francis Ford Coppola's Dracula film was inspired directly by the writings in McNally and Florescu's two Dracula books, although there was a bit of tiff over the fact no credit was given. The second tidbit came later in that semester, when I caught an "In Search Of..." episode on A & E which detailed the search for Dracula's castle and featured some rube gumming happily to the camera over his discovery. Well, the next day I tracked down the Professor and mentioned it to him. Befitting his status as the "Dracula professor", he let out this deep, rumbling and, well...evil, laugh. He was well acquainted with the special, and the simple fact was the castle in the special was the wrong one! In fact, as Prof. McNally evidenced in class soon after with a nifty little highlight video from the late 70's/early '80's, he and Radu Florescu had gained their noteriety by being the ones to find and prove which castle belonged to the historical Vlad.These two stories evidenced for me, and ought to evidence for the prospective buyer, that Ray McNally and his longtime associate Radu Florescu are the definitive academics on the historical Vlad and the legend of Dracula. If you are interested in the man and the myth, then you need go no further than "Dracula: Prince of Many Faces" and "In Search of Dracula: The History of Dracula and Vampires".

Published by Thriftbooks.com User , 22 years ago
I'm a college professor in History and next semester I'll be offering a special course titled Dracula and his Contemporaries. I have chosen Prince of Many Faces as one of the required readings after reading most of what is available on Vlad in English. Florescu's biography is impossible to put down. It is written for the general public and is scholarly at the same time. The title tells us exactly what we will find in the book. But it also provides a selection of translated contemporary sources which allows us to savor the contemporaty attitudes towards the Impaler.

Vlad the Impaler in all his historically researched glory

Published by Thriftbooks.com User , 22 years ago
Off of their original research "In Search of Dracula," the authors have given Vlad the Impaler a more detailed historical assessment without losing their initial sense of fascination with their subject. They do not give in to the sensationalism of their infamous subject, which is a pretty neat trick. It is hard to think that even without Stoker's novel this is a character who would have been forgotten by history. After all, you can make the argument that Vlad does in Eastern Europe what El Cid accomplishes in Spain: stops the Muslim invasion of Europe.

Florescu and McNally provide window into fascinating past

Published by Thriftbooks.com User , 23 years ago
Florescu and McNally have done a commendable job not only at revealing the historical person of Dracula but also at providing the reader with a fascinating window into the man's world. I found this work extremely informative since I am deeply interested in the history of Eastern and Central Europe and well-written and well-researched works in English can be difficult to come across when it comes to this part of the world. It is nice to read a book about this period and not have to wade through a myriad of contemporary Western biases.
Trustpilot
Copyright © 2022 Thriftbooks.com Terms of Use | Privacy Policy | Do Not Sell My Personal Information | Cookie Preferences | Accessibility Statement
ThriftBooks® and the ThriftBooks® logo are registered trademarks of Thrift Books Global, LLC