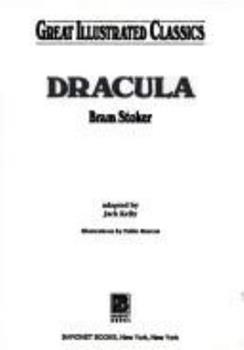 Since its publication in 1897, "Dracula" has continued to terrify readers with its depiction of a vampire possessing an insatiable thirst for blood, and the group of hunters determined to end his existence before he destroys a young womans soul. Features a new Introduction. Revised reissue.

Published by Thriftbooks.com User , 19 years ago
Bram Stoker's Dracula is, hands down, the greatest horror novel ever written. In addition, it is also an enduring classic of literature. You may have seen every Dracula movie ever made, but you do not know the real Count Dracula until such time as you have read Stoker's book. Of course, unless you have been living under a rock, you will know the general plot line, but I assure you there is a wealth of rich material buried throughout the text that is sure to excite, intrigue, and surprise you. Perhaps the ending is a slight anticlimactic, yet I, having read this novel before and being quite familiar with the Count, read the final pages with bated breath, an anxious mind, and the sense of exhilaration that only the most talented of writers can induce.The most striking characteristic of Stoker's masterpiece is its solid grounding in late 19th-century Victorianism. This may prove frustrating to some readers. It is far from uncommon for the men in the tale to weep and bemoan the dangers threatening the virtuous ladies Lucy and Mina; virtue and innocence of women are hailed rather religiously. Mina, for her part, assumes the role then deemed proper for women, accepting and praising the men for their protection of her, worrying constantly about her husband rather than herself, shedding tears she must not let her husband see, etc. Yet, it is most interesting to see Mina rise above the circle of a woman's proscribed duties; she in fact becomes a true partner in the effort against Dracula, expressing ideas and conclusions that the men, with all of their wisdom, could not come up with themselves. Another thing I find interesting is the lack of a clear protagonist in Dracula. Technically, I suppose, Jonathon Harker is the protagonist, but Mina, Dr. Van Helsing, Dr. Seward, and the Count himself basically operate on an equal plane with him. It is Van Helsing who can be described as the anti-Dracula; he plans the moves by which he and his friends seek to thwart the Count's plans and destroy him; the second half of the novel can be compared to a chess match between two equally strong competitors. Minor characters such as the lunatic Renfield are also drawn clearly in our mind's eye by Stoker's incredible gift of characterization. While the format is unusual--the novel consisting fully of diary and journal entries by different characters--you cannot help but be drawn in closely to the group of heroic souls who pledge their very lives to one another as they take it upon themselves to combat a centuries-old evil. One could expound upon a number of themes in this novel (and many literary critics have certainly done so), so I will just quickly mention a few. Is this an erotic story? Certainly, to some extent, but there is certainly nothing overtly sexual in these pages. Is it really horrible? One might wonder how much blood one would encounter in this product of the Victorian age, but there are indeed some rather shockingly gruesome descriptions of

Published by Thriftbooks.com User , 20 years ago
One of the scariest books in history, DRACULA is nevertheless misunderstood. Our civilization is removed from the Victorian era. We think of it as somehow distant and quaint, and ourselves as modern. But when Bram Stoker published DRACULA in 1897, the Victorian era _was_ modern. Stoker meant to make the book more frightening than most books by bringing an ancient horror into a modern, anti-superstitious world. He uses typewriters and phonograph disks the way a modern writer would refer to the internet and e-mail. DRACULA's first readers might've looked out of their town or country houses and expected to see Dracula's gaunt figure emerging through the fog.He tells the story through a series of diaries, letters, clippings. Normally this is an unweildy method of storytelling, but in this case it is most effective.The novel is divided into three broad sections. In the first, young Jonathan Harker and Dracula have the stage almost alone. Though Harker's diary we learn details of his journey through eastern Europe to meet a Count who wants to travel to England, and Harker carries him certain important papers. Count Dracula's character comes across very strong and well-defined, and grows ever menacing as Harker slowly learns he is not going to be allowed back to England, but will become food for Dracula's vampiric harem.The second part of the book, set in England, deals with Mina Murray, who is going to marry Jonathan; Mina's friend Lucy; three men who are in love with Lucy; and a good-hearted but mysterious Ductch doctor, Abraham van Helsing. The bulk of this part deals with Lucy's mysterious disease, her decline to death, and her transformation into a vampire that her suitors must destroy out of love. Dracula appears only fleetingly through the book, but the reader knows what happens, and suspects the cause of Lucy's decline. In the last part, Jonathan, Mina, and Lucy's three lovers band with Dr. von Helsing in a pact to destroy Dracula before he can spread his contagion throughout England; and meanwhile, Dracula wreaks his vengeance on them for taking Lucy from him.Stoker uses many ways of approaching his subject. Occasionally the horror is direct; but once it is established, he makes it subtle, working behind the scenes, in a way that may be even more frightening. Though he also uses different voices, his prose is invariably fine. And as each character has to overcome his aversion to ancient superstition and face Dracula with a mind open to the fact that there's more in the world than science and technology and late-Victorian materialism can contain, the book becomes eerily meaningful for the twenty-first century. Modern purveyors of vampiric fiction dispense with the blatant Christian symbolism used to fight Dracula's ilk, such as a crucifix or sanctified host, or prayer. They also turn the evil of Dracula topsy-turvey and somehow invent sympathy for soulless monsters who view living humans as food. Stoker doesn't hesitate to

Published by Thriftbooks.com User , 20 years ago
Dracula, by Bram Stoker, is a well-thought out, complex novel that leaves the reader page-turning into the late hours of the night. The author's use of imagery and detail make the novel complete and help to further the reader's understanding. The style in which the book is written, which is called epistolary, is hard to comprehend at first, but it eventually grows on the reader and it becomes easy to interpret. Dracula, a vampire who has lived through centuries, is the main character, and throughout his pursuit of people to feed on, he runs into many people who are looking to destroy him and put a stop to all of the havoc he has brought to their lives. The fight against evil is displayed throughout the novel and the obstacles that are overcome by the characters take an immense amount of bravery and strength. One of those obstacles is the destruction of Count Dracula. The success in overcoming this obstacle lies with Professor Abraham Van Helsing, Dr. Jack Seward, Arthur Holmwood, Quincey P. Morris, and Jonathan Harker. These five men team together to save Jonathan's wife, Wilhemina Harker, from the evil Count Dracula. They have to save her before the same thing that happened to Lucy Westenra, her best friend, happens to her...........

Published by Thriftbooks.com User , 21 years ago
Dracula is a book like no other. I first read it when I was just a little kid and thought that this is the kind of literature taht should be read through and through. The writing style is very different and at the same time very catching. Stoker works immaculately to bring in the first person narrative to life in this through a journals-like style of prose. This book has spawned the modern interest of people with vampires and inspired a horde of movies and other books as well. The modern dsay queen of vampires Anne Rice in whole her vampire chronicles fails to capture the magic of that creature created by a syphilitic irishman. Stoker truly created a legend. Many reports speculate that Stoker based his story on facts with regard to the existence of Dracula. Vlad Tepesh or Vlad the IMpaler was the ruler of Walachia in the middle ages and is still a legend in Romania till this day. His ruthlessness against the Turks brought much fear in the hearts of men. Vlad was the kind of guy who would feast in front of a thousand people being impaled in front of him. The other part was the fact that Stoker was said to have witnessed a psychiatric case in which a person was demented in that he had to drink blood to relinquish himself from pains he was feeling. A number of peoplehave pointed that vampirism is truly a disease, a form of a disorder called porphyria in which treatment includes the injection of fresh hemoglobin into the patient. Incidentally those patients are sensitive to light, which is true to Stoker's version of events. In any case, Dracula is among the best tightly packed book out there, with the best perspective and excellent prose. Stoker truly does succeed in taking the writer to the land of horror and simply created the most immortal legend of all. Bram Stoker's Dracula, the movie directed by Francis Ford Coppolla holds true to the book for those who haven't got the time to sink their teeth into an amazing book as this.

Dracula, you just think you know the story

Published by Thriftbooks.com User , 24 years ago
After having seen numerous treatments of the Dracula story, I wrongly assumed I new it pretty well. After stumbling through the first few chapters, I got the swing of its style. Mr. Stoker used a rather novel approach in creating this novel. The perspective of the story changes with each chapter. You read narrative from many different characters. Awkward at first, later it gives the impression of a balanced account of the events. It seems to make the events more believable. The reader is not biased by the narrator's point of view. Anne Rice's "Interview with a Vampire" is told from Louis' perspective. That very story is given a different spin from Lestat in "The Vampire Lestat". With Dracula, all players are backing up everyone elses story. The chilling effect, is that it seems true. I was very pleased that a hundred year old story could hold such a grip on me. Actually, it was I that had the grip, a tight fisted one, on the book until I finished.
Copyright © 2020 Thriftbooks.com Terms of Use | Privacy Policy | Do Not Sell My Personal Information | Accessibility Statement
ThriftBooks® and the ThriftBooks® logo are registered trademarks of Thrift Books Global, LLC