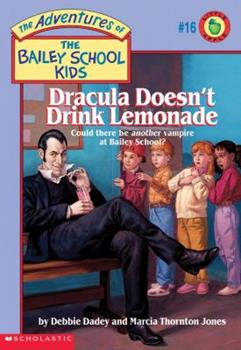 The hugely popular early chapter book series re-emerges with a new look Brand-new eye-catching cover art brings a modern feel to this classic monster series for young readers. There are some pretty weird grown-ups in Bailey City There's a new guidance counselor at Bailey Elementary School and he's giving the kids the creeps. No one understands why his skin is so pale, why he hides from the sun, or why his skin is deathly cold to the touch. But Counselor...

Published by Thriftbooks.com User , 16 years ago
There are some weird grownups in Bailey City. But Could the new guidance counselor really be Dracula, the famous vampire. The Bailey School Kids are going to find out!

Published by Thriftbooks.com User , 18 years ago
If you want a book abuot mystery this is the book for you. It is very funny and interesting. There are some very funny characters and scary ones too. There is a new counselor in town. The kids think he is very scary. I find this book very interesting. There was a kid so scared of the counseoer he wore a scarf all up arond his neck. Two days later they found the counsler go into Mrs.Jeepers basment.Then the next day at school the principal told the kids the counsler had to leave. Then he said he had to fly. So they know it must mean something. They also remembered that his hands were cold.

Published by Thriftbooks.com User , 20 years ago
Strange occurrences and weird adults are nothing new (really) to the 3rd grade of Bailey Elementary School. However, when the thirsty new school counselor shows up with pale skin, pointed teeth and a CAPE, the gang gets nervous. Could this be the famous Dracula come to their school?? He DOES like to sit in the dark in his office and most of the gang thinks their own teacher is a vampire!! But, would a vampire-especially one as famous and ancient as Dracula himself-drink pink lemonade?? The gang is about to find out!!This marks the 16th installment in the Bailey School Kids series, and is definitely one of the more creepy books in the series. Having a vampire for a teacher is bad enough, but having TWO in your school is asking for trouble! Especially if one is the most famous vampire in the world with an unquenchable thirst!Of course, the books are all written with the possibility that the supernatural creatures (vampires, genies, ghosts and even a few aliens and a pirate) could be nothing more than eccentric people. Of course, it's hard to believe it, and that's where the series' appeal comes from.Like other Bailey Kids books, "Dracula Doesn't..." is a quick read for advanced readers and adults. It is also a very good choice for beginning/intermediate readers who are looking for something silly and fun. A number of reluctant readers have decided that reading actually CAN be fun after picking up one of the books in this series (there's currently over 40 of them, at last count). It isn't necessary to begin with #1 and progress to the end, for each stand easily by themselves, though there are characters that appear in more than one book.All in all, it's a fun series and as a reading teacher I've found myself hooked on these things and will likely wind up reading (and reviewing) the whole series. Get one yourself and see if you don't enjoy following along with the gang!

Published by Thriftbooks.com User , 21 years ago
Do you like mysteries because you will like this one! The name of the book is Dracula Doesn`t Drink Lemonade. The author is Debbie Dadey and Marcia Thornton Jones. The characters are Liza, Melody, Eddie, Ben, Huey, Howie, Mr.Drake, and Principal Davis. The mystery takes place at Bailey School. Liza and Melody really told Ben to stop fighting with Huey. What partly happens is their principal tells them to go to the nurse's office. Liza and Melody are in shock because Ben is faking he is sick! Do you think Mr.Drake is really a Dracula? Do you think Mr. Drake really pushed Ben? Read the book to find out.
Copyright © 2020 Thriftbooks.com Terms of Use | Privacy Policy | Do Not Sell My Personal Information | Accessibility Statement
ThriftBooks® and the ThriftBooks® logo are registered trademarks of Thrift Books Global, LLC