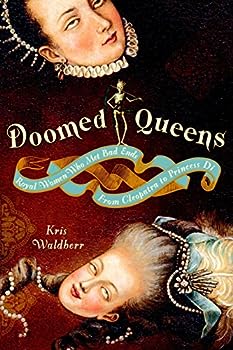 Illicit love, madness, betrayal--it isn't always good to be the queen Marie Antoinette, Anne Boleyn, and Mary, Queen of Scots. What did they have in common? For a while they were crowned in gold,... This description may be from another edition of this product.

Published by Devon185 , 3 years ago
Wow women just didnt stand a chance back then...so many famous and so many ways to die.. Some deserved it while others had no choice.. Nice book

Published by Thriftbooks.com User , 13 years ago
We have all probably heard the sermon: "those who do not learn from history are bound to repeat it." Kris Waldherr exposes this truism with biting candor in her appropriately titled Doomed Queens. Part cautionary tale, part biography, Doomed Queens is chock full of regal queens meeting not-so enviable ends. Readers will find all their favorite femme fatales like Anne Boleyn, Marie Antoinette, and Mary Queen of Scots, but also lesser known figures such as Empress Wang and Theodora of Trebizond. Waldherr reminds us, "too often history is written by the victors." So true. For this reason, readers will be captivated by Arsinoe IV, the Jan Brady of history--pushed aside by her more cunning sister, Cleopatra. Then there is Juana of Castile who emerges from the shadow of her powerful parents, Ferdinand and Isabella to show how things really went down in the power struggle for the throne. hint: it doesn't end pretty. In each biography, Waldherr shows how herstory doesn't always end as happily as history. There are so many doomed queens included that you might have a hard time keeping their deaths straight. No worries. Waldherr offers handy icons to accompany each tale symbolizing everything from death by child birth to a date with the executioner. Each biography ends with an irreverent "cautionary moral" that may especially appeal to teens tired of pedantic conclusions in their history lessons. What can we learn from Sophia Alekseyevna, the disaffected, half-sister of Peter the Great? Perhaps it is as simple as, "the best candidate doesn't always get the job." What does Marie Antoinette's bucolic stint as a milkmaid tell us? "When you play at being a peasant, you risk being killed by one." Humorous quizzes and pithy sidebars add an extra level of intrigue for readers who have shorter attention spans while Waldherr's haunting illustrations suspiciously circle each queen like a macabre dance of death. Look closer and you will find ghoulish memento mori peeking out from behind each delicately rendered portrait. Could this be a reminder? Perhaps current examples of distaff corporate climbers and policy makers can be made a head shorter with as much disregard. (ah hem...Palin) But don't let the title fool you. Although undeniable a morose angle taken, at the heart of Doomed Queens is not how queens died, but how they lived. Did Joan the I of Naples deserve the same fate as her husband? Why was the deposed Irene of Byzantium a candidate for sainthood? It's these types of questions that will have book clubs, classrooms, royalty aficionados and modern-day divas talking.

Published by Thriftbooks.com User , 14 years ago
For those guilty pleasure seekers, this book is for you! Talk about a good, fun read, Waldherr's collection of "royal women who met bad ends" is packed with enticing tidbits that reveal the dark side of royalty and privilege in an ever volatile world. Waldherr does an excellent job choosing her queens carefully, with the inclusion of monarchs from across time and cultures; some readily identifiable (i.e., Jane Seymour, Eva Peron, Princess Diana), and some lost in the abstract vaults of long lost empires. The poignancy lies within their stories and the universal nature of their fascinating experiences. No one is spared in this assembly of matriarchs, whose untimely deaths are often as pathetic as their supposed fortunate circumstances. It's not good to be the queen is the underlying message that binds these ill-fated royal women together. Waldherr presents each queen in a concise format that is compelling, entertaining and never boring. In fact, you will have a hard time putting this book down. You can retrieve nougats of tantalizing information by poring over the many eye-catching sidebars, anecdotes, accurate-looking illustrations, easy to read icons indicating manner of death (oooh, I loved these little death symbols!) along with a fun end-of-book quiz and even Doomed Queen paper dolls. The stories end with cautionary morals: these summations effectively inject humor and enable the reader to identify with the very human foibles/limitations that were precursors to the queens' demise. Despite their status, leadership and often rich and opulent surroundings, they could not escape the grim reaper and the equalizing swing of his scythe, or guillotine! This book is for history buffs with its wealth of interesting details as well as anyone inclined to explore the evils of actual persons and events. The book is nicely packaged as a glossy trade and can be easily carried anywhere. That's good because it is the type of addictive read you'll want to peek inside over and over again.

A Book for the Queen in all of us

Published by Thriftbooks.com User , 14 years ago
I actually recieved this book as a birthday present and it really is the gift that keeps on giving! I am a huge fan of historical non-fictions and fictions and this book has been such a pleasure to read. Its one of those books thats difficult to put down and you can read over and over agin. Its insightful and clever and Waldherr does a great job on adding a touch of dark humor; not to mention the great illistrations and the paper dolls on the flaps! The best part about Doomed Queens is that you don't have to be into history to enjoy it and it would make a great gift for any woman.

Published by Thriftbooks.com User , 14 years ago
As usual with Kris Waldherr's work, this book is thoroughly researched, and presented with a certain panache. Each of these queen's stories has been thoroughly researched, and presented with enough detail to keep the reader interested. Each story is personal ... we are not reading one story ad nauseum, with different names attached. The toen of the writing is a tad bit tongue in cheek, with a small cautionary moral at the end of each presentation. (For instance, with Eva Peron the cautionary moral is "You can't rule fromt he grave.") The pages themselves are made to look "old", and the graphics on the front cover simply draw you in without your knowing why. There is a bonus in that a flap on both the front and back covers contains three "paper doll" figures of different queens, with background available from the Doomed Queens Internet site. Can we as women learn from this book? Yes - this book reflects not only the history of the queens, but the history of the world - with all of its political, religious, and paternalistic overtones. A good read, and food for thought.

Published by Thriftbooks.com User , 14 years ago
I'm a history buff and I wasn't sure what to expect when I picked up "Doomed Queens" by Kris Waldherr. But I loved it and really found it hard to put down--the profiles of these women were humorous, well-researched and informative. The writing is rich with queenly anecdotes and the kind of detail that I love. The overarching theme of how women were often pawns in the power struggles of men becomes a scenario of sadness, so beyond the humor there are other points that are made. Doomed in that they often were caught up in forces beyond their control, Waldherr covers the big names like Anne Boleyn and comes up with a whole roster of fascinating figures not often mentioned in history books. But this book also has a "guilty pleasure" quality to it with the icons of death and the pithy morals at the end of each vignette. I can recommend this enthusiastically and I'm sure it would make a fine gift for the history, historical fiction or "Tudors" fan on your holiday list!
Trustpilot
Copyright © 2022 Thriftbooks.com Terms of Use | Privacy Policy | Do Not Sell or Share My Personal Information | Accessibility Statement
ThriftBooks® and the ThriftBooks® logo are registered trademarks of Thrift Books Global, LLC