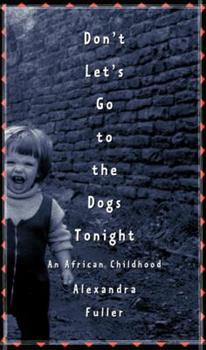 Don't Let's Go to the Dogs Tonight: An African Childhood

When the ship veered into the Cape of Good Hope, Mum caught the spicy, heady scent of Africa on the changing wind. She smelled the people: raw onions and salt, the smell of people who are not afraid to eat meat, and who smoke fish over open fires on the beach and who pound maize into meal and who work out-of-doors. She held me up to face the earthy air, so that the fingers of warmth pushed back my black curls of hair, and her pale green eyes went...

Published by Thriftbooks.com User , 12 years ago
Very quick delivery. I started to read "Don't Lets Go To The Dogs Tonight" the day it arrived. It is a terrific read, and it's frightening, it's fascinating, funny, laughable and all a true story. I have passed it on to several of friends and they enjoyed it as much as I had. Thanks for offering a great book and a very reasonable price.

Published by Thriftbooks.com User , 14 years ago
Alexandra Fuller tells a story about growing up in farms in Zimbabwe as it became independent and then in Malawi as her parents worked to make a living among expats and natives. She went to a white school which emptied out of the white students at independence and then filled with the black children of the neighborhood. They had a servant who was a gifted tracker. She was invited into the home of a very poor black family. As a child she was able to see and do things the adults couldn't. Alexandra has a wonderful recall of the details of childhood. Lisette Lecat has a perfectly clear and delightful voice with a British accent that makes hearing the details a pleasure.

Published by Thriftbooks.com User , 17 years ago
I could hardly put this book down. It's the memoirs of a British girl growing up in Africa. Her story is absolutely fascinating. Highly recommended

Don't Let's Go to the Dogs Tonight: An African Childhood

Published by Thriftbooks.com User , 20 years ago
I loved this book. Alexandra Fuller's writing style is refreshing and unique. Her vivid and sometimes horrifying experiences were totally engrossing. It has been several years since I have become so absorbed in a book that I was bereft when it ended and desperate to find another book to fill the void. I even immediately reread sections rather than let it go. The racism of her parents is not disguised nor apologized for. It is stated as a matter of history, and despite my shock at their attitudes, I appreciated the honesty with which it was recounted. When Alexandra swore never to leave Africa after nearly dying from drinking tea water tainted with Hippo dung, I was incredulous that anyone could wish to live in such harsh conditions. I'm sure it would be fascinating to hear her sister's side of the story, since Alexandra paints their relationship as cruely one-sided.Believe every good review about this book and treat yourself to a wonderful experience by reading it today.

A Quick Trip Back in Time

Published by Thriftbooks.com User , 20 years ago
Evokes images of childhood and Africa that are at the same time luscious and abhorrent, but that draw you into the life of this young girl like few other early childhood biographies have achieved. Miss Fuller is completely unapologetic about her parents and accepts them for who they are are and doesn't try to excuse or blame them -- how refreshing!This is hardly an objective review, as I like Ms. Fuller grew up in the white farming community of Rhodesia/Zimbabwe and I'm also a survivor of the pink prison (Arundel School) and now reside in the US. But unlike Bobo, I grew up a wealthy farm with relatively normal parents in a very abnormal world of the white colonialist in black Africa. I resonate strongly with her images which are dead on. I still wake each morning listening to hear the "work harder" doves and the "go away" birds. Thanks Bobo for giving me a couple hours to relapse into a world that no longer exists but was home for some of us. Looks like those "Use of English" classes taught by Mrs. Twiss at Arundel paid off....
Trustpilot
Copyright © 2022 Thriftbooks.com Terms of Use | Privacy Policy | Do Not Sell My Personal Information | Cookie Preferences | Accessibility Statement
ThriftBooks® and the ThriftBooks® logo are registered trademarks of Thrift Books Global, LLC