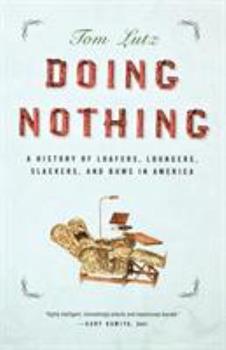 Couch potatoes, goof-offs, freeloaders, good-for-nothings, loafers, and loungers: ever since the Industrial Revolution, when the work ethic as we know it was formed, there has been a chorus of slackers ridiculing and lampooning the pretensions of hardworking respectability. Whenever the world of labor changes in significant ways, the pulpits, politicians, and pedagogues ring with exhortations of the value of work, and the slackers answer with a strenuous...

Slackers of the World, Unite!

Published by Thriftbooks.com User , 15 years ago
If you happen to be the kind of person who prefers week-long naps to making a career and winces every time somebody starts talking platitudes about the value of work, the need to "strive" or the immorality of idleness, here's a book for you. In it you will find lots of references to more or less respectable intellectuals and artists who spent a great deal of their time celebrating the "slacker" ethos (before the term even existed) by advocating our inalienable right to do nothing. Of course, apart from gaining fame (or infamy) for their ideas, none of these people was actually able to overthrow the prevalent "work ethic", which proudly claims that "happiness" and "fulfilment" can only be achieved if you toil your life away. So what IS it that makes the slacker such a nagging presence in Western culture? This is what Lutz tries to answer by looking at the development of this figure in America. Not surprisingly, one of the first things we are told is that the "work ethic" and its converse, the "degenerate" idleness, can be traced back more or less to the Industrial Revolution. Apparently before this period humans wasted less time extolling the virtues of work. The hunter-gatherers, as we well know, were so "primitive" that they thought sleeping and playing around were just about the greatest luxuries one could enjoy - and they had plenty of that. The ancient Greeks even went so far to consider work a "curse". And we all remember how much Jesus praised the lilies in the field for... well, just standing there not doing much. What has changed, then? Lutz's answer: "the nature of work". As more and more people were dispossessed (i.e., lost their land or their own tools/craft) and became dependent on the continual development (and "whims") of a huge, impersonal factory system, the need to remind them of the "merits" of work (for others) increased. Nowhere has this transformation been more visible than in America - "the land of the free", whose population initially consisted mainly of indentured whites and enslaved blacks, - a country that has made such a swift transition from agriculture to factory to "service" society in only a couple of centuries. At each stage new bunches of people were chucked out of suddenly obsolescent activities and forced to adapt to the latest "economic demands". Those who were left hanging - either because they didn't find a place or actually refused to participate in the new work system - became known as idlers, loafers, tramps, bohemians, hobos, bums, beats, delinquents, etc. And were accordingly reviled by the defenders of dutifulness (usually - surprise, surprise - political/moral authorities, factory bosses, company managers, the mainstream media, etc). Fortunately, not everyone considers his/her own obsolescence a drama. Instead, some people seem to revel in their newly (and often temporarily) acquired freedom to do anything BUT working for others in exchange for a (mostly) ludicrous salary. They even have t

The sound of a different drummer

Published by Thriftbooks.com User , 16 years ago
My father, of blessed memory, Reuben Kelly Freedman used to say ,"Be a worker, not a shirker". And all my life I have been driven by the idea that I must be working , doing something useful at each and every moment. Now the paradox in my case is that I chose a way of work which to many people is not work at all ( writing) and which in terms of earning power certainly fits more in the 'shirking ' category than the working one. Tom Lutz takes on the theme of ' working- shirking' in a broad- ranging experiential exploration starting with Ben Franklin and Samuel Johnson and working up to our Internet days. He hits upon the paradox of the master measurer of his own useful time Franklin's spending much time in idle conversation with the belles of the City of Light- while the composer of 'The Idler' Johnson was doing the drudgery of compiling his dictionary. Lutz who is an English university teacher, one that is who works in a job which most people would envy for its short- hours, a job which in fact has longer hours than most tells many an interesting anecdote in tracing the history of those who Bartlebylike preferred to say 'no' when asked to do their work. He highlights the fact that it is often the 'slackers'( A term coined in World War I days for those who did not want to serve in the Army or work) who get a different more important job done. Thoreau after all did not march to the tune of an industrializing New England, but rather heard the sound of a different drummer. Lutz himself seems to be a champion of the 'more time you have for yourself the freer and better off you are' school though of course for some such a recipe is one for disaster. I would only point out that one of the conclusions of the new 'Happiness School of Psychology ' people is that one of life's greatest happinesses is when we are involved wholly in doing our work, especially if that is a kind of creative work in which we know our own individual effort matters.

A true pleasure to read cover to cover, especially while the reader is allegedly at work

Published by Thriftbooks.com User , 16 years ago
Doing Nothing: A History Of Loafers, Loungers, Slackers, And Bums In America by Tom Lutz is the true story of the American anti-work ethic from Benjamin Franklin's "air baths" to Jack Kerouac's dharma bums to the notorious slackers of Generation X to doctors declaring the medical problems of overwork and much more. The history, philosophy, and justification of goofing off, supplemented with careful research and statistics, makes for engaging reading whether for expert sociologists researching the cultural phenomenon's of shirking or lay readers making the most of their own relaxation time. A true pleasure to read cover to cover, especially while the reader is allegedly at work.

Much amusing ado about something. Or nothing.

Published by Thriftbooks.com User , 16 years ago
Anyone who's ever questioned the actual industriousness of Ben Franklin, envied the sylvan sloth of Henry David Thoreau, or felt indignant over the perceived indolence of Douglas Coupland will find (most of) the real story in Tom Lutz's entertaining survey of American productivity and slackerdom. Lutz begins on the couch, where his teenage son, Cody, has parked his lethargic, jobless self, leading Lutz to meditate on his own lack of motivation as a youth and throughout his life. From there, he journeys through the Agricultural and Industrial revolutions through to the dot-com explosion, chronicling the lives, philosophic musings, and artistic output of lazybones and workaholics alike. I understand how Lutz may have wanted to just focus on white American males--following the author's adage of "writing what you know"--but there are definitely other illuminating slacker narratives created by, for, and about people of color, such as the Cheech and Chong films and Ice Cube's "Friday" film trilogy. In a section on the Greed is Good 1980s, Lutz mentions the GOP's criticisms of welfare queens during that decade, but gives no nods to any black's, Latino's, or Asian-American's takes on their own ethnic groups' laziness. (Doing Nothing includes a funny description of slackers in Japan--with that country's obvious parallels to ours in terms of work ethic, job dedication, and overwork--but that's about all the non-white ethnic representation.) May political correctness have kept him from writing about America's "brown loafers?" In a note that will likely reveal my age, my favorite chapters talk about the Beats, hippies, punks, and dot-commers. Lutz addresses the child-like dot-com work ethic and web sites dedicated to all things slothful. If the book is ever updated, he'll have to talk about blogs and social networking sites--the NEWEST kind of self-branding and self-identifying that requires a lot of time and energy, but not a whole lot of real brainpower or sweat.

Published by Thriftbooks.com User , 16 years ago
I got this book largely because I was curious as to how anyone could write a history of people who did nothing. Afterall, people who do nothing wouldn't do enough to leave a history behind (that follows, doesn't it?) Well, Lutz surprised me. People who do nothing, or at the least strive to not work, are quite an interesting crew. I ran into a lot of famous people I had never thought of as loafers before: such as Ben Franklin and Samuel Johnson. Of course the usual suspects were also there: like Kerouac and Ginsberg (and the beats in general.) The author seems to suggest that he is something of a slacker himself. But I found that hard to believe as clearly a great deal of work went into this book. The amount of digested reading, research, review of culutral materials such as films, etc., was impressive. The writing was also quite good. Either Lutz is a very good writer or he has an excellent editor. I say that because he wove a large amount of disparate material into a fascinating narrative about people and segments of society committed to doing nothing. The pace was never boring; while the amount of information presented was always informative and stimulating. And as I read, sprawled out on the couch, I found myself reflecting more deeply on just where I fit into the argument of, to work or not to work.... I guess I'd have to say that Doing Nothing proved to be an edifying read.
Trustpilot
Copyright © 2022 Thriftbooks.com Terms of Use | Privacy Policy | Do Not Sell or Share My Personal Information | Accessibility Statement
ThriftBooks® and the ThriftBooks® logo are registered trademarks of Thrift Books Global, LLC