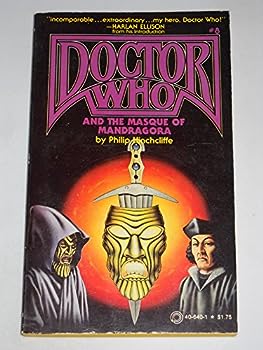 Doctor Who and the Masque of Mandragora #8

Tim Pigott-Smith reads this gripping novelization of a classic Doctor Who adventure. Forced off course by the Mandragora Helix, the TARDIS lands in the province of San Martino in fifteenth-century... This description may be from another edition of this product.

Published by Thriftbooks.com User , 16 years ago
A great, fun old Who adventure. In this novel, Doctor Who gets knocked out twice, Sarah captured four times, and then the doctor sets up a trap that kills hundreds of peasents because they were dupped into a cult. Does the Doctor feel shame or sadness? No, he just asks for a salami sandwich. A fast read, and a good one. Enjoy it for what it is.

The stars align for a good story

Published by Thriftbooks.com User , 21 years ago
The TARDIS takes the Doctor and Sarah close to the Mandragora Helix as they travel through the Vortex. Forced to materialise there temporarily, the TARDIS picks up an unwelcome passenger in the form of a ball of Mandragora energy, which forces the TARDIS off course to 15th century Italy.There, Prince Giuliano is in a precarious position politically, under threat from his uncle Count Frederico, and the second, hidden threat of the Brotherhood of Demnos, a black-magic cult that Mandragora plans to use for its own ends... Caught up in political intrigue and the manipulations of a secret society, the Doctor and Sarah must prevent the annexation of Earth by the Mandragora Helix.'The Masque of Mandragora' was an excellent TV serial, and makes the transition to the written page under the pen of its producer, Philip Hinchcliffe. The adaptation is a reasonable one, but perhaps suffers from the lack of the wonderful scenery of Portmeirion, where the serial was shot. However, the story is a strong one and makes a good transition to the novel form.
Trustpilot
Copyright © 2022 Thriftbooks.com Terms of Use | Privacy Policy | Do Not Sell My Personal Information | Accessibility Statement
ThriftBooks® and the ThriftBooks® logo are registered trademarks of Thrift Books Global, LLC