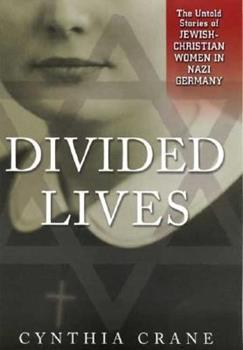 by Cynthia A. Crane

Divided Livesis a book that brings together the horrifying life stories of women from Jewish-Christian marriages whose families were persecuted under Hitler's Third Reich. These women, the "Mischling," "half breeds," or "half Jews," were subjected to an onslaught of anti-Jewish laws that divided spouses, family, and friends. From the early Hitler years through post- war Germany, the book chronicles these women's personal struggles, joys, losses, and...

Divided LIves, a review by an appreciative reader and friend

Published by Thriftbooks.com User , 17 years ago
After reading this accumulation of sensitive and very private stories by the subjects still alive in Germany, I recommended to the author that this book should be required reading in high schools across the USA. The women who dared have their stories told survived an unbelievable period in German history in the 1930s and 40s. Reading the painful recollections of the personal experiences of the subject Jewish women under the domination of the Third Reich reveals an awful human experiment too horrible to fully understand, but important that it be revealed. Readers will not be disappointed in the revelations extracted by the author, who has a personal connection to this period in history. Her father was a fraternity brother of mine, and I only recently learned of the humiliations he suffered before he escaped to the United states at age ten. Humiliations that have affected him ever since. The author learned why her maiden name isn't the same as her father's original last name. And that triggered the quest to learn more, and thus the research in Germany and this book.

Published by Thriftbooks.com User , 21 years ago
Many of the mischling women interviewed in this book state that the young people of today, especially Americans don't have any feeling whatsoever for what happened in WWII. Sadly, they are correct in that we learn about the war, but we don't learn about real life during the war. Facts and technical outlines of battles can only give one the surface of the struggle. To dig deeper, you need to read first person accounts such as the ones given in this book...stories of persecution and oppression that will make the war seem all too real. The paper thin line of distinction between Germans and Jews comes to life here with the children of Jewish/Christian parents who are ranked according to the amount of Jewish blood they carry...first degree half-Jew or second degree quarter-Jew. Most are saved from the concentration camps by their affiliation with their Aryan (German) family, but all suffer some amount of anti-semitism and persecution under the Third Reich. This is a revealing portrait of the fate of the mischlinge, a people who are often forgotten in the gruesome and humiliating saga of the holocaust.

One Heart at a Time

Published by Thriftbooks.com User , 22 years ago
I was sincerely moved by the personal, touching images of such a horrible time in history. So many of us who grew up after the War know this time only from a panoramic, impersonal view: newsreels, Hitler, Nazis, trains, faces, bodies, battles, movies, history books, all of it frightening and sad; stark images we can never forget or want to forget. But to hear these women tell the intimate stories of their lives, of their struggles, of their dealings with terror and the deaths of their loved ones, brings history into the heart. It's the first time I ever felt that I could, in whatever meager way, understand and perhaps sympathize with how these innocent people, one person at a time, one day at a time, one heart at a time, tried to survive this horrendous nightmare. More of us in this world today should know these stories. We should truly understand how living people were affected, not just how the images of their suffering were presented to us. We should want to give some love back in time, somehow, to help them live their time. We should want to share their heartbreak and their pain. As I read this book I wanted to do these things.

These stories drew me in.

Published by Thriftbooks.com User , 22 years ago
After reading this book I realized it wasn't just another Holocaust or nazi book. I had heard of the mischling before but only as a footnote in larger works. This is the first book I've read that really allows some of these little-understood victims to tell their story. The women's own words bring an immediacy and relevance that we can identify with even in today's world. The notion of a divided life is very real and at times frightening. Each woman's story touched me as did the author's autobiographical notes at the beginning.

"Divided Lives" is beautiful and thought-provoking.

Published by Thriftbooks.com User , 22 years ago
Cynthia Crane is to be congratulated for writing a wonderful book about love, courage, faith and family in Nazi Germany. "Divided Lives" does an excellent job of educating the reader that not all victims of the Holocaust were in concentration camps. The Mischlinge (half-breed children), were caught in a political and sociological limbo that was, for many, quite terrifying. The true stories, told in first-person, are captivating. I felt that I was in these women's homes, eavesdropping on their conversations with the author. I highly recommend "Divided Lives" to anyone who is interested in learning more about the history of Nazi Germany, and how ten courageous women managed to endure the nightmare that was the Third Reich.
Trustpilot
Copyright © 2022 Thriftbooks.com Terms of Use | Privacy Policy | Do Not Sell My Personal Information | Cookie Preferences | Accessibility Statement
ThriftBooks® and the ThriftBooks® logo are registered trademarks of Thrift Books Global, LLC