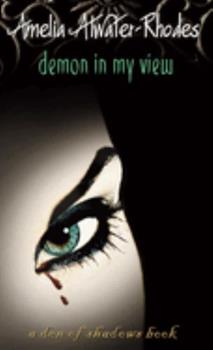 Demon in My View

(Book #2 in the Den of Shadows Series)

Though nobody at her high school knows it, Jessica is a published author. Her vampire novel, Tiger, Tiger, has just come out under the pen name Ash Night. Now two new students have just arrived in Ramsa, and both want Jessica's attention. She has no patience with overly friendly Caryn, but she's instantly drawn to Alex, a self-assured, mysterious boy who seems surprisingly familiar. If Jessica didn't know better, she'd think Aubrey, the alluring villain...

A great horror book for teens and adults.

Published by Thriftbooks.com User , 21 years ago
Amelia Atwater-Rhodes' second book is a great one. Somewhat different from the first, the book includes alot of ideas linking her first book to her second. In the book Demon in my View, it tells about a girl, Jessica, griefly mentioned in her first book, is a teenage outcast. Nobody likes her in her her school untill two new students enroll into Ramsa High. One is an annoying girl who thinks Jessica's inner child needs a friend. The second student is a dark, handsome, mysterious boy, who looks an awful like Aubrey. He is a vampire in Jessica's book Dark Flame. From his pendents from his tatoos, he is exactly like Aubrey. He is sent on a killing mission of the author, untill he falls deeply in love. What will happen? Read Demon In My View by Amelia Atwater-Rhodes and find out for your self.

Published by Thriftbooks.com User , 21 years ago
I read and enjoyed Amelia Atwater-Rhodes first book, but i did think her writing needed a bit more development. This book definitly shows an advancement in her writing. I had been awaiting the release of her second book for a while, so you can imagine what an *ss I felt like when I realized that the book came out a month before I found it. Though I had to restrain myself from reading the entire book within the very evening that I got it, it was a lot of fun to read and -alright, I'll admit it- exciting at times. It has action- let's just say it wouldn't have as many stars if didn't have a couple fights- and the romance was vague- just the way i like it if there has to be any at all. But she still hasn't reached the pinnacle of her writing ability, though she has the potential, which is why i didn't give her only 4 stars. I think she has still has the tendency to be a bit superficial- not going too in depth- and her originality is well done but not spectacular. I even found in a few cases that actual text in the book was nearly identical to another book i've read (my favorite)- I know this for a fact since i've read that favorable book 9 times. (No, its not one of The Last Vampire books.) But, either way, its a very good book, and better and worse than the last book in different ways. Rock on, Amelia.

Published by Thriftbooks.com User , 21 years ago
When my reading class decided to read a vampire book i was so excited, but when I read this book i fell in love with them. Amelia describes almost word for word the emotions and feeling of her characters rather than their appearances. Alot of her characters are described in every way. My favorite is Aubrey. In Amelia's first book she described him as rude, and mean, and just Aubrey. But in this book she descibes how he cares for a human and falls in love with her. All the girls in my reading class are in love with him. We all agreed that Amelia needs to start a series of books on him starting from his birth to the end of his vampiric life. However all this info. of his life should not be contained in one tiny book, they definitely need a series and alot of them. I look forward to reading more of Atwaters books, and hearing alot more about Aubrey.

Published by Thriftbooks.com User , 21 years ago
Atwater-Rhodes as sucessfully created another masterpiece. But,unfortuneatly, this one was also short and left me craving more. Iread it within two hours immedtiatlly after I bought it today. What bothered me a bit, is that Risika didn't show up. If Amelia writes another in this series I'd love to know more about Jessica and Aubrey and all the others. Both books are outstanding. Keep it up!

Published by Thriftbooks.com User , 21 years ago
I really enjoyed this book, even more than the author's first, which was itself excellant. Jessica, the main character, seems a pretty average, unpopular teen at first glance. But she's actually published a vampire novel under a pen name. When a new boy enrolls at her school, he reminds her a great deal of Aubrey, the vampire villian from her novel. It turns out that he really is Aubrey, come to kill her. However, things become complicated when the two fall in love. Both of these characters appeared in In the Forests of the Night, and I was glad Miss Atwater-Rhodes chose to write more about them. Jessica was only briefly mentioned in the first book, but I thought right away that she would be a neat character. And I never liked Aubrey much in the first book (although he was definitley a cool villian!), but meeting Jessica certainly improved his personality. I highly reccomend this wonderful novel to fans of horror and vampire novels. The author is extremely talented, and I think it is wonderful that she has become a published author while she is still a teenager. I hope she continues to write more wonderful books like this one.
Copyright © 2020 Thriftbooks.com Terms of Use | Privacy Policy | Do Not Sell My Personal Information | Accessibility Statement
ThriftBooks® and the ThriftBooks® logo are registered trademarks of Thrift Books Global, LLC