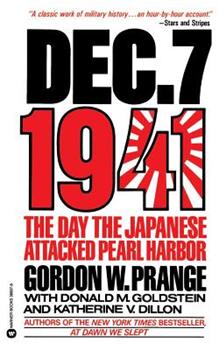 Before dawn breaks over the Pacific, young Japanese pilots don the scarfs of ancient warriors--and in the early light of Sunday morning an American radarman picks up an approaching air force, only to be told by his superiors that the planes are U.S. B-27s. A few hours later, Pearl Harbor is in flames, and America's naval fleet lies in bloodied ruins...

Published by Thriftbooks.com User , 18 years ago
Although Gordon W. Prange's At Dawn We Slept was a riveting book about the events that preceded and followed the attack on Pearl Harbor, many readers were disappointed by the very short description of the combat that took place over Oahu on December 7, 1941. Three other Prange books (which were actually completed by co-authors Donald Goldstein and Katherine Dillon) chronicled the revisionist theories and Prange's rebuttal (Pearl Harbor: The Verdict of History); the battle of Midway (Miracle at Midway); and Soviet espionage against Japan (Target: Tokyo). Finally, in the late 1980s, Penguin published Prange & Co.'s final volume, December 7, 1941: The Day The Japanese Attacked Pearl Harbor.To Pearl Harbor buffs, this is the gold mine for the most dramatic nuggets dealing with the raid itself. It tells the story of the attack's many phases from both Japanese and American viewpoints, including some heartrending recollections from military personnel and civilians who suddenly found themselves making an unexpected and sudden transition from peacetime to war.Although Walter Lord's similarly themed Day of Infamy is somewhat more user-friendly as far as readability goes, December 7, 1941 is still a worthwhile entry in the crowded field of Pearl Harbor literature.

Fact-filled history of the attack itself

Published by Thriftbooks.com User , 20 years ago
This is the centerpiece of Prange's (and Goldstein and Dillon's) Pearl Harbor trilogy. 'At Dawn We Slept' set the stage for the attack, and 'Pearl Harbor: The Verdict of History' summarizes and draws conclusions. But this title, 'December 7, 1941,' tells the story of the attack itself, from the point of view of both American and Japanese planners, participants, and spectators.Prange's research is stunning, and he presents his facts in a straightforward and non-sensationalist way. He doesn't point fingers or call names, he just lays things on the table. As someone who's read a fair amount of Pearl Harbor literature, I really appreciate that.I recommend Prange's trilogy for anyone interested in serious Pearl Harbor scholarship. And if you're just looking for a fact-filled, yet easy to read, introduction to the event itself, 'December 7, 1941' is the title for you.Highly recommended.

An excellent, well researched book of the Day of Infamy.

Published by Thriftbooks.com User , 23 years ago
This book is a must. Though difficult to obtain, it is well worth the wait. It is a usual Gordon Prange Book: Well researched, easy to read, and without errors. Prange's relentless search, and also of his "sucessors" after his death, for the TRUTH about the the attack on Pearl Harbor, make this a must read. It belongs with Prange's other works "Miracle at Midway", "At Dawn We Slept", and "At Dawn We Slept: The Verdict of History".This book dispells many myths (as do the other books) about the December 7th attack: FDR's "guilt"(he was innocent), Kimmel and Short's responsibility (they were scapegoats), The USS Arizona (a bomb NEVER went down the smoke stack). Prange's exhaustive research gives an accurate account of Dec. 7th.This book is a must for anyone interested in the Pearl Harbor attack, and should actually be the FIRST book to read on the subject.I cannot praise this book and his other works enough. He IS the authority.
Copyright © 2020 Thriftbooks.com Terms of Use | Privacy Policy | Do Not Sell My Personal Information | Accessibility Statement
ThriftBooks® and the ThriftBooks® logo are registered trademarks of Thrift Books Global, LLC