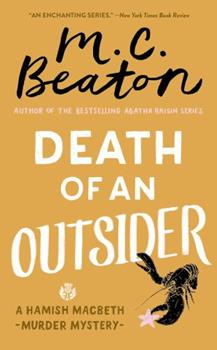 Death of an Outsider

(Book #3 in the Hamish Macbeth Series)

From the author of the Agatha Raisin television series... Death of an Outsider: A Hamish Macbeth Mystery The most hated man in the most dour town in Scotland is sleeping with the fishes, or-more accurately-dumped into a tank filled with crustaceans. All that remain of the murdered victim are his bones. But after the lobsters are shipped off to Britain's best restaurants, the whole affair quickly lands on the plate of Constable Hamish Macbeth. Exiled...

Published by Thriftbooks.com User , 14 years ago
Once I read the first mystery I was hooked. I love the way this author writes and I love her characters. I've read almost all that she has writen and when I read her last book I will be very unhappy. You would think that once you read one or two you'd know her style and the answer to the mystery. No way; every one keeps me in suspense.

Published by Thriftbooks.com User , 15 years ago
"Hamish hated change almost as much as he hated work. He had the tenancy of some croft land next to the police station at Lochdubh, where he kept a small herd of sheep, now being looked after by a neighbor. He earned quite good money on the side from his small farming, his poaching, and the prize money he won for hill running at the Highland Games in the summer. All that he could save went to his mother and father and brothers and sisters over in Cromarty. He did not anticipate any easy pickings in Cnothan." -Death of an Outsider Given all that, and the taciturn nature of the locals, it's understandable that Hamish is awfully grumpy about being sent to Cnothan for three months to cover for a vacationing colleague. But if he thinks it's tough on him being an outsider, that's nothing compared to how an obnoxious Englishman gets treated. When the latter is murdered it brings Inspector Blair to town and makes things even worse for our hero. This entry in the very fine series contains the lobster incident that featured in the first episode of the different, but equally good, tv show. Ms Beaton had really hit her stride here, just a few books into the Hamish Macbeth mysteries, and it's an immensely enjoyable read.

Death of an Outsider is wonderful romp.

Published by Thriftbooks.com User , 18 years ago
M.C. Beaton's stories are absolutely excellent and the best examples of cozies you'll find anywhere. I am almost disappointed with myself because I read her Agatha Raisin series before the Hamish Macbeth series. As much as I enjoy Agatha, Hamish is pure delight! In this book he has been transferred to Cnothan to relieve the village policeman as he takes an extended vacation. Right away Hamish is thrown into the village's political situation. He finds the people of this village are unfriendly and there seems to be an oppresive atmosphere in the village. Sure enough, in true Hamish fashion, a corpse shows up. Hamish must determine first who has been killed and then who actually did it. Hamish and the reader are subjected to more of the odious Blair as he is again sent to the village to unravel the homicide. Of course Hamish solves the murder (and not Blair) but not before he actually finds some romance in this ominous little village of Cnothan. We also discover why Hamish will never eat lobster again. Hamish is a wonderful character and I find as I read each story, he becomes more and more real to me.

Only the Most Deserving Die

Published by Thriftbooks.com User , 18 years ago
Only the Most Deserving Die in M.C. Beaton's wonderful mysteries. This is one of the earlier books and Police Constable Hamish MacBeth (with dog Towser) are sent to the village of Cnothan to relieve the vacationing officer there. Hamish finds allegations of witchcraft, a weird closed-in village, and within days, a skelton is found within the standing stones. The ever unambitious and mooching Hamish must figure it out before the dastardly Inspector Blair pins the murder of a most unlikable resident on a conveniently absent villager. Hamish does find answers to some of the questions - like what have the lobsters been eating - but who has been eating the lobsters? A charming addition to the Hamish series.

Published by Thriftbooks.com User , 21 years ago
M.C. Beaton is one of my top five favorite authors of all time. Her writing style is superb and has since made me much more critical of other authors. Treat yourself to an adventure in the Highlands; remember your coffee and scones-for you'll want to stay awhile! Only one complaint: It is important to the romance angle to read these books in order, and yet the listing in front is scrambled. This is the third book in the series, starting with Death of a Gossip and Death of a Cad.
Copyright © 2020 Thriftbooks.com Terms of Use | Privacy Policy | Do Not Sell My Personal Information | Accessibility Statement
ThriftBooks® and the ThriftBooks® logo are registered trademarks of Thrift Books Global, LLC