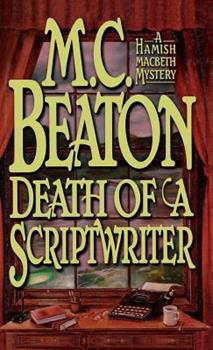 Death of a Scriptwriter

(Book #14 in the Hamish Macbeth Series)

From the author of the Agatha Raisin television series... DEATH OF A SCRIPTWRITER: A Hamish Macbeth Mystery HOLLYWOOD IN THE HIGHLANDS With the lovely Priscilla Halburton-Smythe away in London, Lochdubh Constable Hamish Macbeth pines for company during the long Scottish winter. He gets his wish -- and more -- when a troupe of flashy, urbane filmmakers clamors into the nearby town of Drim. Before long bedlam erupts around their make-believe mystery...

ENJOYED THIS ONE AS MUCH AS ALL THE OTHERS

Published by Thriftbooks.com User , 13 years ago
I like a relaxing read now and then, and these Hamish Macbeth mysteries by M.C. Beaton fill that need perfectly. I must admit to being a big fan of Hamish, a constable in a small village in the Highlands of Scotland, having read most of this series over the years. This story, and the others in the series can be classified as cozy village mysteries. Beaton's ability to describe the people, villages and land make these books quite remarkable. Now, as others have pointed out, the actual "mysteries" are not all that mysterious. The stories are quite laid back, and yes, they are somewhat predictable. This is good though, from my point of view and my needs. In this particular book, a retired, and not aging mystery novelist, who has retired to Hamish's area, is given a second chance when a T.V. crew moves into a nearby village to film one of her long out of print books. The cast and crew arrive, the village is set on end, and the story begins. Beaton has filled her story with, as usual, two murders, both of people you do not particularly like, and then thrown in plenty of likely suspects. Beaton gives us plenty of leads (yes, you can figure out who done it if you read closely), but does not throw in surprises right at the end to allow her hero to solve the case, while you, the reader, could not simply because you did not have access to all the facts. This small novel does contain many twists and curves, but none of them are all that sharp and the story is easy to follow and easy to read. The usual village characters are present complicating things for our hero, who, I am glad to say, does not step out of his long established character. He is still quite laid back and simply wants to live a simple life "doing his thing." Per usual, Hamish's love life is a mess, but not even that seems to bother him all that much. Tending a few sheep, feeding his chickens, and solving a murder now and then are quite fulfilling. You can read this work in one or two settings, depending on how fast you want to read, and I highly recommend them for clearing the mind, escaping, and for just simple reading enjoyment. Hope the author keep them coming.

Published by Thriftbooks.com User , 15 years ago
Other reviewers have already summarized the plot, so I won't recount that information. I just have to say that this was an engaging, fun little book filled with quirky characters in a quirky little village. Poor Hamish Macbeth - the guy is about as nice as you can get, but keeps getting his heart broken, is constantly underestimated and insulted by his out of town law enforcement superiors, and has the thankless job of questioning the bizarre and sometimes crazy inhabitants of the local village whenever a murder occurs. But he takes all of it in stride, and never abandons his work or his cheerful nature. He's a great character. The mystery itself is fine, but it's the nutty characters that really make this book work. You'll find yourself shaking your head at their antics but cheering for Hamish to solve the mystery and put everyone in their place.

Charming Hamish at his best.

Published by Thriftbooks.com User , 17 years ago
In this book we see Hamish at his best. He's charming and endearing. This book portrays the life of an aging mystery writer in the way only M.C. Beaton can. A television company is going to serialize some of Patricia Murtyn-Broyd's old, out-of-print books, which puts Ms. Priscilla over the top. But then people begin mysteriously dying. Is this potential revial to her books going to go up in smoke? Hamish is on the case (minus his Priscilla this time), and you can bet he solves it, but not before uncovering more twists and turns and potential murderers than he knows what to do with. Again Hamish steals the book. He is the most endearing sleuth out there right now.

Published by Thriftbooks.com User , 20 years ago
Another good book in the Hamish Macbeth series. I enjoy these much better than the Agatha Raisin books. A group from a TV production company come to Drim to film a TV show. The scriptwriter is killed. Who could have done it? Several has said they would kill him. Was it Fiona, Patricia, Angus or Josh? Inspector Blair believes it was __________. Hamish is not so sure, then someone else is killed. Who killed the second person? Was it Gervase, Fiona or Shella? Hamish keeps digging until he comes up with an answer. As usual Beaton writes so you can feel like you are there. I can see the mountains and the mist in my mind. The characters are great and seems so real. Will be glad to read the next book. If you have not, please read one of the Hamish Macbeth books, I think you will like it.

Beaton's 'Last Writes' a Good One!

Published by Thriftbooks.com User , 21 years ago
In "Death of a Scriptwriter," M.C. Beaton brings us the fourteenth installment of the Hamish Macbeth series--and she is in her element! Set in the Scottish Highlands, in the village of Lochdubh, this series is a nice read--nothing too complicated, full of local Scottish color (with both its characters and its setting), lots of delightful red herrings, and logical solutions.This series, the titles of which always begin with "Death of a...," is quite a successful one and one which takes little time to read. Macbeth, the local constable, is proud of the fact that he is not an ambitious soul. Despite the fact that he has solved thirteen previous murders, he is still a constable. He refuses to be promoted as he claims he is too happy in Lochdubh to want to advance to a larger city. He is filled with lots of common sense and while often the villagers give him a hard time ("He's too lazy," they claim.), they highly respet him and have come to his rescue more than once. He's not so lucky with his own love life, however, and seems to fall in love with any woman who shows interest. The real love, Priscilla Smythe-Halliburton, has moved to London, after he had broken off the engagement, and appears intermittently in all the books of the series. In "Death of a Scriptwriter," a television crew appears in Macbeth's bailiwick to film a novel written by an English spinster who has moved to Lochdubh. Her books were never much of a success, but this one was picked up by the BBC. She is delighted that at long last, fame is coming her way. She is so overjoyed that she fails to retain the complete rights to her book; a screen writer is hired to "modernize" the plot and characters (in other words, to add lots of sex and violence to the rather staid Victorian tale). Disagreements among the TV crew members erupt and, viola, the screenwriter (an impossible sort, unliked and unloved by anybody, and quite impossible to work with) is found dead; shortly thereafter, the star of the film (who is to appear nude in some scenes) is killed when she "falls" off a boulder; her alcoholic husband has also been found dead! (Bodies seem more plentiful than the last act of "Hamlet"!) Everyone seems to be a suspect! Macbeth, in his plodding, but thorough way, of course, leads us to the conclusion, wherein all deaths are solved, and the reader then is set up to await the next installment. This book is a fun-read. Ms Beaton is in her element--she's writing about what she seems to know a lot about herself--authors, screenwriters, and television crews (this series is being filmed in England and we can only hope that A & E or PBS will bring it to us over here!). Beaton devotees will love this one!
Copyright © 2020 Thriftbooks.com Terms of Use | Privacy Policy | Do Not Sell My Personal Information | Accessibility Statement
ThriftBooks® and the ThriftBooks® logo are registered trademarks of Thrift Books Global, LLC