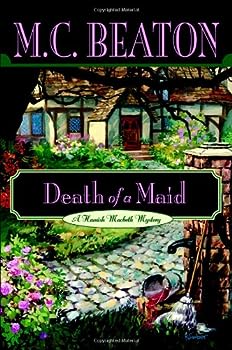 Death of a Maid (Hamish Macbeth Mysteries, No. 23)

(Book #22 in the Hamish Macbeth Series)

This description may be from another edition of this product. From the author of the Agatha Raisin television series... Death of a Maid: A Hamish Macbeth Mystery Mrs. Gillespie is famous around the northwest of Sutherland for being the best charwoman ever. Of...

Published by Thriftbooks.com User , 13 years ago
I'm becoming adicted to M.C. Beaton's mysteries. I've read 2 to date and would like to read more! There is humor, mystery, romance and just down to earth fun in both novels I've read. I love it when Hamish starts talking with a Scottish accent when he's nervous or upset. Good stories, hard to put down!!

Published by Thriftbooks.com User , 13 years ago
I am a big fan of this author in general, but some of her books are better than others. This mysery stands out as one of the best in the Hamesh series -- well-plotted and engaging. Fortunately, the author kept everything focused on the central mystery, without having Hamish solve little mysteries right and left, as I've seen in some of her books. This really helped the book -- it was focused on the core mystery, which involves a thoroughly disliked (and dislikable) cleaner (maid?) who is found murdered. Everyone hates her, and with reason, so who did it and why? Hamish -- a good-natured police constable in tiny Lochdubh, a town on the coast of Scotland, had recently won the cleaning services of this woman in a raffle. Shortly thereafter, he realizes that this woman stole a letter he had received -- a private letter -- so he begins to think she might be engaged in blackmail. The story consists of visits to the people she cleaned for, with a side story involving Elspeth, who is back in Lochdubh with a coworker. Hamish thinks they're an item, but Elspeth is still carrying a torch for Hamish. All the things I like about this series are present in this book -- humor, a sense of place (you can imagine yourself there in a village in Scotland), a likeable detective, a variety of vivid characters, a little romance, and a strong plot. I look forward to reading the latest in the series.

CONFESSION OF A NEW READER!

Published by Thriftbooks.com User , 14 years ago
Okay, I will admit it. I am a newcomer to this particular genre of novel, being relatively newly introduced to them by my wife. This is certainly the first work by M.C. Beaton I've read, therefore the first of the Hamish Macbeth Mysteries. I also have to admit that I have been missing a lot over the years! This work is simply fun to read! The story is simple but very well told. A maid, or charwoman, is hit over the head with her own mop bucket and murdered! So the tale begins. This author is an absolute master at the development of a character in a very short time with very few words. You get to feeling you know each and ever one of them quite well before the end of a page. This takes skill! I liked the simple plot line of this work. It was not hard to figure out that quite a number of the people living in Macbeth's village were extremely pleased that the woman was dead, including her poor husband. This left the story open for many, many very interesting suspects, all of whom could conceivably committed the crime. These suspects were all quite colorful and were a story within themselves. The author can be absolutely hilarious at times and the interaction between the author and his pets is great. I found my self enjoying this one and actually relaxing, which is the primary reason I read these novels. I have not much to compare it with, so I am giving it five stars simply because I liked it. I will certainly be reading more of this author's work!

Death of a Maid

Published by Thriftbooks.com User , 14 years ago
The service was great. The book came in good condition.

Published by Thriftbooks.com User , 14 years ago
In Lochdubh, Scotland, local Constable Hamish Macbeth literally trips over the corpse of the town gossip, housecleaner Mrs. Mavis Gillespie. Macbeth does not need a medical examiner or coroner to know murder occurred as the severely bruised victim was beaten to death with the weapon also obvious, her battered pail. Macbeth begins his official investigation by questioning the deceased's clients. Every one of Mrs. Gillespie's customers insisted she was a fantastic cleaning woman, but Hamish notices each says this with disdain. He also wonders why if Mrs. Gillespie was so good at her job, all the homes she cleaned seemed filled with layers of dust as if no dust rag, broom, vacuum or mop ever was used. This inconstancy leads Macbeth to dig even further into the lifestyle of Mrs. Gillespie who lived way beyond the means of a housecleaner or even a constable should. As Hamish starts to understand how she earned her income and that the motive was killing a blackmailer, his police department peers want his investigation stopped making him wonder if some of them were victims of the late extortionist, Mrs. Gillespie. Though Macbeth has starred in over twenty Scottish police procedurals, his latest DEATH OF A MAID is a fabulous fresh investigative tale. The story line follows his inquiries as he struggles with too many suspects once he realizes the victim was a blackmailer and also struggles in his personal life too. M.C. Beaton is terrific as always as she provides her fans with an entertaining whodunit. Harriet Klausner
Copyright © 2020 Thriftbooks.com Terms of Use | Privacy Policy | Do Not Sell My Personal Information | Accessibility Statement
ThriftBooks® and the ThriftBooks® logo are registered trademarks of Thrift Books Global, LLC