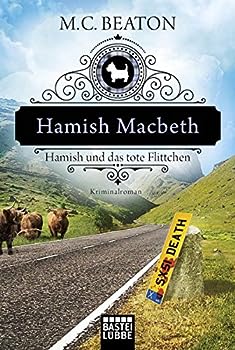 (Book #5 in the Hamish Macbeth Series)

This description may be from another edition of this product. "Splendid fun." The New York Times Book Review A Hamish Macbeth mystery. Wealthy Maggie Baird is neither nice nor kind nor generous. Once she was beautiful, but now, although middle-aged, she retains...

The Best Book in the Hamish Macbeth Series!

Published by Thriftbooks.com User , 14 years ago
What's a hussy? The definition that fits this book is "an immoral woman." As you can imagine, hussies are not well regarded in the conservative Scottish highlands. Put a hussy in that locale, and the results can be explosive. If you love Hamish Macbeth mysteries, you have a great treat ahead of you with Death of a Hussy. But if you haven't read any of the books in the series, you owe it to yourself to begin with the excellent, Death of a Gossip. Then go on to read the books in order of their publication. You'll enjoy the development of the ongoing characters better that way. As the book opens, Hamish has been banished to Strathbane to be beat officer. His new partner there proves to be a good foil for lots of humor. But he misses Lochdubh. Feeling forlorn, rescue comes from an unexpected direction: New resident Maggie Baird suggests that the locals make up imaginary crimes to force the powers to be to send Hamish back . . . even though she's never met him. Strathbane capitulates and Hamish returns. Then the story leaps forward in time as Maggie retires from the scene to work on recovering her previous good looks from the days when she was a highly sought-after companion for rich men. Her timid niece, Allison, remains behind with one thing on her mind: Becoming a driver. Hamish is pressed into duty as her driving instructor. The book alternates between Hamish and Allison as the narrators, and the contrast enlivens the story development. Maggie unexpectedly returns, much thinner, more toned, with freshly dyed and cropped hair, and wearing expensive clothes. But she's in a bad mood. She has set up four of her former lovers in competition to marry her for her money. In the meantime, Maggie makes life difficult for Allison, her heir. When Maggie dies following a suspicious car fire, the criminal investigation part of Death of a Hussy begins. You probably won't have any trouble figuring out who the murderer is, but it's a most enjoyable story. There's also a development on the Priscilla-Hamish front to look forward to. Death of a Hussy has several qualities that make it stand out from other books in the series: 1. The subplots are long, interesting, and invariably humorous. 2. The time involved isn't compressed into just a few days. As a result, there's more room for interaction and development in relations among the characters. 3. There's more variety of locales than usual. 4. The humor is much stronger throughout the book. You almost get a sense of M.C. Beaton as being a perfectly happy person in reading this book. 5. The plot nicely brings out new dimensions of the on-going characters in ways that strengthen the series for future books. This book shows much more care in planning and execution than the earlier or later books in the series. It's as though M.C. Beaton realized that she had a potentially bigger winner on her hands if she made some mid-course corrections in the series . . . and those corrections are pe

Published by Thriftbooks.com User , 18 years ago
Ms. Beaton is the queen of village mysteries, and each one of her Hamish Macbeth books is as delightful as the last. In this one, the story starts with Hamish living in Strathbane where he has been tranferred. He's not a happy man because he has had to move from his beloved Lochdubh. The villagers of Lochdubh aren't happy either, and they stage a number of "crimes" in their small village which forces the authorities to send Hamish and Towser back where they want to be. But in true Hamish fashion, murder seems to follow his reinstatement. One of the villagers is burned inside her car, and it's apparent to Hamish that it was murder. He opens up a whole wasp's nest of potential murderers, and it's up to Hamish to find the one who did it. This book is a delight - offbeat and funny.

A bonbon treat of a cozy.

Published by Thriftbooks.com User , 18 years ago
Short and sweet and jam-packed with fun, DEATH OF A HUSSY is the fifth in the series of Hamish Macbeth mysteries. There are some really colorful characters here. Beaton is so good at creating characters with both good and bad sides. Even the "hussy" has some good points -- and the combination of characters can be pretty funny. Satisfying conclusion. Thoroughly enjoyable.

Published by Thriftbooks.com User , 19 years ago
It's really enjoyable to read the adventures of Macbeth full of not only flaws but also charms. It's the first book as a McBeth series and I am so curious of the relationship with Priscilla onwards....so I tried every means to get the earliest volumes in this series, but failed. Let be informed if somebody get a good news. I recommend M.C. Beaton's another series of Agatha Raisin...

Published by Thriftbooks.com User , 19 years ago
This is the fifth in a series of mysteries featuring the detective work of small town, Highland Scottish detective Hamish Macbeth, P.C. In this story, Maggie Baird, a rich Londoner of more than somewhat checkered history, moves into Lochdubh for peace and quiet, but then finds it too peaceful and quiet. Deciding that she needs to marry again, she invites four old suitors to her house and then announces that she'll marry one, and bestow all her money on him. When Maggie ends up dead, its up to Hamish to find out who did it and why.My wife has been a big Hamish Macbeth fan for years, and now I know why. This story was a great deal of fun to read. I enjoyed the characters that Ms. Beaton created, finding them interesting and well developed. I enjoyed her setting of small town Scotland, and found the story and setting believable and captivating. If you are interested in a story set in modern Scotland, or just a good mystery, then I highly recommend this book to you.
Copyright © 2020 Thriftbooks.com Terms of Use | Privacy Policy | Do Not Sell My Personal Information | Accessibility Statement
ThriftBooks® and the ThriftBooks® logo are registered trademarks of Thrift Books Global, LLC