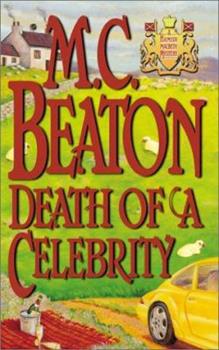 Death of a Celebrity (Hamish Macbeth Mysteries, No. 18)

(Book #17 in the Hamish Macbeth Series)

Constable Hamish Macbeth returns for his 17th case as he tries to solve the murder of a gorgeous TV reporter whose shows have ripped apart an entire village.

ANOTHER NASTY CHARACTER THAT MOST OF SCOTLAND WANT DEAD!

Published by Thriftbooks.com User , 13 years ago
Death of a Celebrity, by M.C. Beaton is another great offering to all the Hamish fans out there. This simple, well written series has brought a lot of reading enjoyment to many people out there over the years, and this addition only adds to that enjoyment. Our redheaded constable in Lochdubh finds himself faced with another of Beaton's truly obnoxious characters, this time in the form of a very nasty T.V. personality who is starting a new show featuring MacBeth's little corner of the Highlands. A nasty, aggressive reporter with few morals, and an eye for married men! The premise of the T.V. show will be digging up dirty little stories of locals, doing a feature on them, and then releasing it to National T.V. Needless to say this young ambitious lady is not going to last long! Also, needless to say, there are no end of suspects, Hamish included, who would love to see her dead! Of course, I am sorry to report, that Hamish is still fretting and moping over his one true and lost love, Priscilla, as she is about to get married to another, but ah, there is a new girl in town! A local reporter with psychic abilities; part gypsy, part liberated woman, bright, a great looker, intelligent, and indeed, as with most of the women in Scotland, she has her eyes set on the eternal bachelor. It that were not enough, he still has the problem of being promoted and the problem of how to get out of that promotion! We still have many of the wacky and eccentric characters we have met before, along with several new ones, which I hope, we see more of in future books. Of course there is the first murder and the inevitable second one, but we have several nice, although not as serious, crimes thrown in here and there throughout. In addition to crime solving, Hamish is able to make a complete mess out of his love life, per usual...this poor guy just does not have a clue! Lugs, his faithful dog, is still lugs but has some new found freedoms in this story, which he takes full advantage of. This is another enjoy able, smooth read, not all that complicated, but well done. As with previous novels, the author is again able to say more in one sentence than many writers can in a full chapter. Quirky, simple little mysteries..yes, but thoroughly enjoyable!

Published by Thriftbooks.com User , 17 years ago
This is honestly one of my very favourite series, and each book is just as enjoyable as the last. I'm only sad that I'm getting to the end of the series, and hope that M.C. Beaton continues to write for a good long while yet. Hamish is a wonderful character and the eccentric people in his little village of Lochdubh are so real, that it seems they are actually real people. In this book we meet two new characters that I hope to see more of - Elspeth, who seems to be a wonderful romantic interest for the died-in-the-wool Bachelor, Hamish and Inspector Carson who takes the place of the odious Blair when murder of famous television celebrities occurs in and around Lochdubh. Again Hamish is thrown into a murder investigation in his quiet little village, and before he, Elspeth and Carson can solve it a few more deaths occur. For anyone who likes their mysteries cozy, with a definite wicked comic appeal, you cannot go wrong with Hamish Macbeth.

Published by Thriftbooks.com User , 18 years ago
This is the eighteenth in a series of mysteries featuring the detective work of small town, Highland Scottish detective Hamish Macbeth, P.C. When a television star attempts to make a career by exposing all of the secrets hidden in the quiet Highlands, she quickly becomes the most hated woman around. And when she turns up murdered, it's up to Hamish Macbeth to find who the murderer is. But, this is no simple case; suspects abound, and Hamish finds that he is getting the unwanted help of the local newspaper's astrologer! Can Hamish unravel this particularly tough knot? You bet!I now consider myself something of a Hamish fan (thanks to my loving wife), and I must say that I deeply enjoyed this book. As with all of the other Hamish Macbeth books, I enjoyed the stories, the setting and the interesting characters. I wasn't totally thrilled with the inclusion of a psychic character, but it didn't ruin the story for me. Overall, I thought that this is a great book, and I highly recommend it to you.

A fine whodunnit in the heather for the highland's finest...

Published by Thriftbooks.com User , 18 years ago
Death descends into the quiet highland village of Lochdubh once again when a muckraking t.v. presenter is found dead in her car just outside of town. It looks like a suicide but police constable Hamish Macbeth thinks differently and sets off to prove otherwise. Nothing comes easy in the highlands, though, and the more he digs into the crime, the more he discovers that many people had motive to murder....This book is the quintessential Hamish Macbeth: sharp, witty, brooding, and oh-so-unlucky at love. Beaton offers up the most well-rounded Macbeth mystery ever, propelling her quirky (but nicely defined) characters along a briskly paced plot that's as warm as a wee dram o' whiskey.

The Best One Yet!

Published by Thriftbooks.com User , 19 years ago
In her latest Constable Hamish MacBeth tale, Death of a Celebrity, M.C.Beaton has outdone herself! Arguably the best yet of this cozy series, Beaton finally fulfills the potential of the series. In this book, Hamish, himself, has been fleshed-out - flaws-and-all, to the degree that on our next trip to Scotland, I expect to be able to spot his tall, red-haired form patrolling the streets of his cherished Lochdubh and the rugged Highlands, as well! Too, coming from a law enforcement heritage as I do, I recognize MacBeth's bucking of "the brass" as a behavior also resorted to by other bright, young talents who serve on police departments in the US, as well...As one who loves both the British "cozy" and the country of Scotland, itself, I have thoroughly enjoyed ALL of M.C.Beaton's books; THIS one is the very best!
Copyright © 2020 Thriftbooks.com Terms of Use | Privacy Policy | Do Not Sell My Personal Information | Accessibility Statement
ThriftBooks® and the ThriftBooks® logo are registered trademarks of Thrift Books Global, LLC