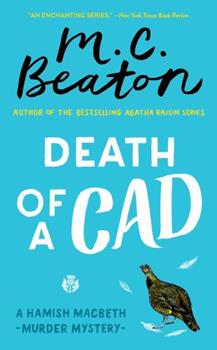 Death of a Cad

(Book #2 in the Hamish Macbeth Series)

From the author of the Agatha Raisin television series... DEATH OF A CAD: A Hamish Macbeth Mystery When Priscilla Halburton-Smythe brings her London playwright fianc home to Lochdubh, everybody in town is delighted . . . except for love-smitten Constable Hamish Macbeth. Yet his affairs of the heart will have to wait. Vile, boorish Captain Bartlett, one of the guests at Priscilla's engagement party, has just been found murdered-shot while on a grouse...

Published by Thriftbooks.com User , 12 years ago
Being a fan of MC Beaton's Agatha Raisin series I thought I'd give Hamish Macbeth a try too. I am pleasantly surprised to find, though the setting is in some ways quite different, the tone is nice and the stories not too dark or muddled. This is a great cozy and I highly recommend all of MC Beatons work.

Published by Thriftbooks.com User , 13 years ago
I can't get enough of the books featuring Constable MacBeth, of that tiny village in northern Scotland--and even of his mongrel dog, Towser, that snores when he falls asleep on the constable's feet. MacBeth is tall, red-headed, penurious, and appears slightly dense in the head. But beneath it all is a good mind and a kindly heart. There is a murder at a castle built in Victorian times and decorated with armor and medieval flags of recent manufacture. The victim is a drunken, insulting, womanizing cad whom no one likes. At first his death is ruled a suicide, but then Hamish MacBeth has a look at the facts and determines otherwise. The plot is good but not especially ingenious. most of the characters are wonderful, as are the atmosphere of Scotland in the fall, and the author's eye and ear for detail. Even MacBeth's dog is endearing in his way. Consider this sample: "Hamish fried a couple of herring for his dinner and gave Towser a bowl of Marvel Dog, a new dog food given to him free by the local shop to try out. Towser ate a mouthful and then tottered around the kitchen, making dismal retching sounds." There are a good many books in this series now: this book was the second, after "Death of a Gossip." I've read most of them and will read them all. They are marvelous entertainments.

Published by Thriftbooks.com User , 13 years ago
I have very much enjoyed reading, and listening to, the "Death of a ______" series by M. C. Beaton. I love the intelligent, sensitive, personable, and caring Hamish Macbeth represented so well in the books. The author firmly establishes the character in these early books, and his lovable character is consistent, and easy to like and care for, throughout the series. I have loved the books, and have especially enjoyed listening to the series in audio book format. There have been two primary narrators in the audio series, Davina Porter in earlier books, and Graeme Malcolm in the later set. Both readers were excellent, bringing strong talent and individual strengths and insights to their narrations. I have especially enjoyed hearing the feminine and masculine perspectives given by Davina and Graeme respectively as they read the separate books. Of course the insights were written into the book by the author, Marion Chesney (M. C. Beaton), but I think I can better understand how Priscilla Halliburton Smythe feels about her situation hearing Davina read, and I have likewise always felt that Graeme seems to capture Hamish particularly well, giving life and voice to the lovable Highland Constable. I can heartily recommend the series to the reader, or listener, but be forewarned-- You will not be able to enjoy the BBC TV series of the same name after reading the books, because it has none of the charm and wholesome appeal that so much fill the pages of every book. --Mike Beier

The further adventures of Hamish Macbeth

Published by Thriftbooks.com User , 16 years ago
This is the second book of the Hamish Macbeth series, picking up a few months after THE DEATH OF A GOSSIP. The story opens as Priscilla Halburton-Smithe is driving her new fiance home to Lochdubh for a weekend houseparty at her parents' house. Tensions soon develop at the party, including the inclusion (or intrusion depending on your point of view) of local constable Macbeth into the group. Naturally there is soon a death to investigate, one that of course confuses all but our hero. This is very much in the long tradition of cozy series mystery. The murder victim richly deserves his fate, the characters of those involved is more important than the action, and there is a large cast of recurring characters. Our hero manages to solve the crime while overcoming the incompetance of his superiors. There is even an ongoing romance. If 'cozies' are your cup of tea you will definitely enjoy this series and will want to read them all.

Death of a cad

Published by Thriftbooks.com User , 21 years ago
The Hamish Macbeth books are wonderful. I only came to discover the Hamish books after reading the thoroughly enjoyable Agatha Raisin series written also by M.C. Beaton. In Hamish's village of Lochdubh, curious characters abound and this helps keep the true killer's identity hidden to the very end. I have now read all of the Hamish books and I highly recommend "Death of a Cad" and "Death of a prankster" as two of the best. There is a television series loosely based on the books. It is very amusing but completely different (not mysteries at all); more an "All creatures great and small" without the livestock. I encourage everyone to give Hamish a try. The books are light yet clever. I can't wait for the next one!
Copyright © 2020 Thriftbooks.com Terms of Use | Privacy Policy | Do Not Sell My Personal Information | Accessibility Statement
ThriftBooks® and the ThriftBooks® logo are registered trademarks of Thrift Books Global, LLC