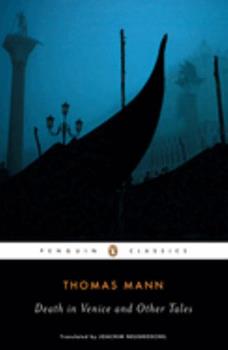 A brilliant . . . perfectly nuanced translation (The Boston Globe) of Thomas Mann's greatest short works A Penguin Classic Featuring his world-famous masterpiece, Death in Venice, this collection of Nobel laureate Thomas Mann's stories and novellas reveals his artistic evolution. In a widely acclaimed translation that restores the controversial passages that were censored from the original English version, Death in Venice tells about a ruinous quest...

Published by Thriftbooks.com User , 19 years ago
I don't think that Death in Venice operates on the premise that a "life of sensation" is worthwhile, whatever the cost. Mann's story is a complication of the traditional morality tale, and Aschenbach's demise is not a result of his giving in to the pursuit of beauty and visceral experience, but of his previous, total rejection of this kind of surrender. Aschenbach, we are told, lives like a "closed fist," and for this reason is completely unequipped to deal with the combined experience of visiting an unfamiliar and sinister place, and of encountering a boy who provokes a strong physical and emotional response (on a sidenote, occasionally I hear someone label this as a homophobic text, but they are entirely missing the point, I think. As in Henry James's Daisy Miller, Death in Venice, on one level, illustrates the way that forces outside of sex can make sex, or the desire for sex, fatal. It has nothing to do with the act, or desire, itself). It is Aschenbach's perpetual need to take the proverbial "high road" that makes his foray into the world of the sensual so disastrous. The story is brilliant. Not only does Mann address wonderful themes like the nature of art, artistic impulse, desire, repression, and Orientalism, even, but the writing and narrative trajectory are flawless.

reading death in venice as an artist

Published by Thriftbooks.com User , 20 years ago
Death in Venice is one of the gratest and most intelectually stimulating books i have ever read. It gives an example of the impoartance of beauty to the human soul. Without beauty there is no reason to live but in the deep lust for beauty the subject is consumed and dies. It askes the question is life without beauty worth living especially if life without beauty is only half a life. Death in Venice is one of the only books, along with The Picture of Dorian Gray by Oscar Wilde, that recognises this idea and shows us that a life of sensation may not be so wrong even if it may ultimately costs life but what is life without beauty. It is the subject of all artists as Keats said "beauty is truth and truth beauty" Byron's life of excess caused his exile and what stands on the lips of literary history are the words "all art is immoral" spoken by Oscar Wilde who's entire life was for beauty. Death in Venice is in proud tradition of the celebration of beauty even if beauty is a cause of destrucion.

Published by Thriftbooks.com User , 22 years ago
I can't imagine how difficult it must be to translate a writer so steeped in his original language as is Thomas Mann. "Death in Venice" and the other stories in this collection are great period - no matter what the language, the ideas and characters stand on their own. What makes this translation so much better is the attention Neugroschel gives to giving us prose that is as good as Mann's original German - this writing is simply beautiful; evocative of the period in which it was originally written without sounding like a joke or a bad imitation of turn of the century fiction. (It's no Henry James satire). Neugroschel has won the PEN/Faulkner award three times for his translations and it's easy to see why. Read his introduction where he talks about Mann's ability to "both evoke and to distance" and how he [Neugroschel] set about translating this feeling into English. This is truly the very best that a translation can be.

With all his "shtick," one of our greatest writers

Published by Thriftbooks.com User , 23 years ago
Like many German writers, Thomas Mann contained the cancerous seed of anti-semitism, which rears its ugly head in these stories, now and then, and he has a tendency toward pedantry, going on and on in an abstract vein about the strengths and weaknesses of the outsider, the artist, the sensualist, ho-hum. When I was younger, I worshiped his writing, and Buddenbrooks was one of my favorite novels of all time (still is).Despite my recent and more mature awareness of his weaknesses, he remains a surprising, brilliant writer. His prose style is dynamic and I continue to emulate that. I was amused to find, however, that I liked the lesser known stories. I found "Death In Venice" ponderous. I liked the stories about the incestuous twins, the tragic man who was dwarfed from a childhood fall, the cuckolded buffoon who is talked into wearing a tutu at a community recital and the eccentric who is compelled to continually mutiliate his dog and heal him. Now these are what I would call real "case histories." I'm sure Mann would scorn me for being partial to these, scornfulness being one of his main attitudes in life. His very disdain of pretension, however, seems like a pretension in itself. Still - his command of language is like no other's.

Published by Thriftbooks.com User , 25 years ago
Thomas Mann at his best. These stories prove that Mann can display his genius also in a shorter form than in his novels. Death in Venice is definitely the most important story in this book. It magnificently shows how the poet Gustav Aschenbach from Munich slowly loses control over his long incarcerated world of feelings as he approaches death in Venice. Full of great symbolism
Trustpilot
Copyright © 2022 Thriftbooks.com Terms of Use | Privacy Policy | Do Not Sell or Share My Personal Information | Accessibility Statement
ThriftBooks® and the ThriftBooks® logo are registered trademarks of Thrift Books Global, LLC