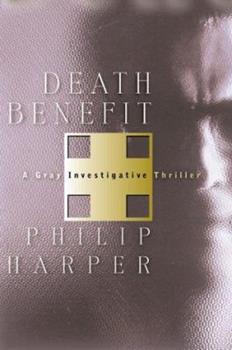 As if insurance agents don't have it bad enough, along comes Jim Hartman, a Frankenstein's monster begat of sloth, greed, and Philip Harper (the pseudonym for investigative reporter Jonathan Neumann... This description may be from another edition of this product.

Published by Thriftbooks.com User , 14 years ago
This book is a very interesting read. If nothing else, it should encourage you to take a look at your own life insurance coverage and be sure that your premiums are going where they are supposed to and that the coverage you signed up for is appropriate. Too many people think the whole life insurance is a wonderful thing but as part of an interesting story, you learn it just isn't the best way to purchase life insurance on many levels.

Time to take a look at my insurance policy!

Published by Thriftbooks.com User , 22 years ago
In order for me to read a fiction book the book has to capture my attention within the first 15 to 30 pages. Death Benefit had me going from the very start and I found myself turning pages and finishing the book within three hours.Philip Harper is a true talent in the fiction arena and this work is not short of spectacular. Harper blends a remarkable tale of murder and corruption with suspense and drama and gives the reader an opportunity to see how deadly insurance can really be.The main character of the book is developed as the average man next door, but as the story unfolds you'll see how devious he really is. Follow along as a string of what would seem to be natural deaths turn into a complex and intriguing tale of how greed and power can leads a reporter to uncover the mystery.Harper's work is some of the best fiction I have read and you can almost get a sense of reality within the writing. I see this becoming a blockbuster movie in the near future. Don't pass this one up it is well worth the time and money.

Fiction That Makes You Want To Check Your Insurance Policy !

Published by Thriftbooks.com User , 22 years ago
This new 232 page novel is really quite interesting. It is written by two veteran investigators under a pseudonym. I found it to be a real thriller, as a crime fighter battles insurance industry corruption. The insurance agent thinks that he has found the perfect crime and goes to any length (including murders made to look like accidents) to get his share of the insurance loot. "Death Benefit" is written in an easy to read narrative style that lets you examine the minds of both the cat and the mouse. Not only is this work of fiction interesting, but it can encourage you to look at your own real life insurance policies and your dealing with insurance agents. Well worth the reading.

Published by Thriftbooks.com User , 22 years ago
The basic plot of this book is that a life insurance agent has been stealing from his clients. Not satisfied with that, he begins killing some of them (making it look like an accident where a rich defendant was at fault) to make even more money through collecting fees from the lawyer who wins the cases of negligence. George Gray, a former reporter, learns about a refused life insurance claim on a dead woman, and is asked to investigate. He uncovers Hartman's malfeasance, and then turns to his goal: Get the agent, Jim Hartman, to pay back those he has defrauded by blackmailing Hartman. The story mostly involves how Gray gets the goods on Hartman. This book is a new genre for me, in using the investigative techniques of reporters to seek justice through blackmailing the bad guys. The mystery aspect isn't very much about who did it and why, but how the bad guys will be brought to justice and made to recompense the injured good guys. As such, I admired and enjoyed the book's novelty of form. If you don't like books about twisted types, you should probably avoid this one. Everyone in sight seems to be either psychologically very abnormal, seriously over greedy, or strangely compulsive. I found much of this to be gratuitous, and unimportant to writing a good story only slightly different than this one. There's a very dark backdrop here for some very dark characters in this book that should appeal to virtually all fans of livres noirs.I rated this work down one star because the book's main premise was patently implausible: That life insurance agents can not send in payments received to the life insurance company on policies and pocket the difference, rewrite policies to increase their commissions, and persuade people to take nothing as a death benefit without tipping anyone off that there is a problem. I may be mistaken (it has happened before), but the life insurance companies I do business with are very thorough about sending notices to the policy's owner and beneficiary whenever a policy is changed or a payment is late. It makes sense that they would, because the life insurance company makes more money if the current policy stays in force unless a new policy is taken out for more coverage. Of course, you may have had a different experience. If you don't mind this implausible (to me) lead, then you should upgrade my rating to five stars. The plot itself is filled with many violent scenes that will probably appeal to those who are interested in martial arts and the details of murder. And the action keeps coming, right to the end, which virtually makes the book a page turner by the middle.I found some enjoyment also in the plot complications that tied George Gray (the good guy vigilante) to the family of one of the victim's (through a former girl friend).If you are tired of predictable mysteries, give this one a try. It will probably surprise you in a number of ways. You can use this book also to

Published by Thriftbooks.com User , 22 years ago
In Philadelphia, Jim Hartman loves stealing and relishes killing. He enjoys making blood money out of his illicit activities. About the only thing he loathes is working at an honest job. He cheats people out of their insurance benefits and murders individuals so that he can earn a fee when his clients, the benefactors, settle a wrongful death suit.His biggest mistake was crossing paths with investigative crime fighter George Gray. For a fee, George also steps outside the law to do whatever is necessary to recover and return money taken away by cheats like Hartman. When the wife of a friend of Gray dies, Hartman plies his trade. Gray smells a con and instigates a game of cat and mouse in which he intends to blackmail his opponent into returning the absconded funds or escort him to the police.The third Gray investigative thriller (see PAYBACK and FINAL FEAR) is a powerful tour-de-force starring two males living on opposite sides outside the law. One is heads and the other is tails, but they share the same coin of operating above (or below) the law. This leaves the audience with the moral dilemma as to what is right and wrong, and what is ethical because a good cause still means defying society,s rules. Philip Harper raises the conscience of the reader, but provides no pat answer leaving it to the individual to draw his or her own conclusions. DEATH BENFITS is a fascinating yet frightening tale that hits the gut because it is not only plausible, it seems genuine.Harriet Klausner
Trustpilot
Copyright © 2022 Thriftbooks.com Terms of Use | Privacy Policy | Do Not Sell or Share My Personal Information | Accessibility Statement
ThriftBooks® and the ThriftBooks® logo are registered trademarks of Thrift Books Global, LLC