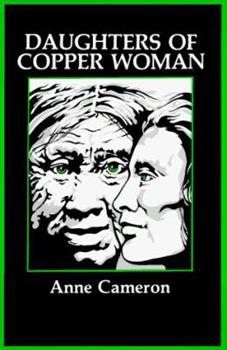 Since its first publication in 1981, Daughters of Copper Woman has become an underground classic, selling over 200,000 copies. Now comes a new edition that includes many pieces cut from the original as well as fresh material added by the author. Here finally, after twenty-two years of gathering dust, is the complete version of the groundbreaking bestseller.In this, her best-loved work, Anne Cameron has created a timeless retelling of northwest coast...

Published by Thriftbooks.com User , 20 years ago
The story that is being told here, goes directly to the heart. The whole book breathes a feeling of ancient indian mythology and knowledge. It is enchanting to read about this vast amount of indian knowledge and about the completeness of their view on the world, which is so different from 'western' approaches. It is also painful to read about the losses as a result of wars and as a result of their being unique and not adapted. But it is an important lesson to see how they deal with this loss, and how they can place themselves in a changing and evolving world, where civilizations rise, flourish and decline and where everyone has its place in time.

Published by Thriftbooks.com User , 22 years ago
I met anne at a talk at Fairhaven College in 1988, during the time of _Stubby Amberchuck and the Holy Grail._ I am male, but I've never encountered a soul so great, so deeply wise about ancient female wisdom nearly elided by silly patriarchal western tradition domination. The ancient female center is still present and wise, as Anne has opened to a few readers. I still dream of the ancient female center rising in the world to end the depradations of male-economic-plutocracy, still excising the traditional people and women as quietly as they can, all over the surface of dear old Gaia. Anne is an oracle. Give her to _all_ your children, esp. boys when they are still young enough to be reached before patriarchy's testosterone poisoning reaches them. Homage to the ancient female center. Ryokan

Published by Thriftbooks.com User , 22 years ago
My first reaction to this book was that it was one of the most beautifully written books I have read, one that cries out to be read aloud. Anne Cameron's sentences read like poetry rather than prose, very lyrical and rhythmical. There's no way its content could be fiction; she must have talked with the women memorizers who remember the oral legends for the Vancouver Nootka Native American tribes. Copper Woman is both the mother of the tribe from whom they are all descended and the respected Old Woman that is within each woman helping her to endure, to remember the old secrets and teachings, and to relearn any lost secrets. Copper Woman is there when the "keestadores" turned the Nootka world upside down and is there yet today as the Woman's Society shares its knowledge and soft power with all the women of the world.

Published by Thriftbooks.com User , 23 years ago
I have taught this book to both men and women on the college level, so I feel that it is not just for girls. You can read it as gentle feminism, as experimental literature, and as a native-American re-telling of white invasions of their culture. It is full of psychological insights, it describes a different way to navigate ocean currents, and it proposes an ideal egalitarian community--in a very brief span, it enlightens many human issues.

My favorite all time book.

Published by Thriftbooks.com User , 25 years ago
This book contains stories from the native people of Vancouver Island, retold by Anne Cameron much as they had been told to her. You will find it is a collection of stories, many about Copperwoman. Though she is more diety than human, her joy and pain are terribly real. Woven throughout the stories are bits and pieces of the present day. As you read you find yourself weaving in and out from past to present and then back to the past again. As I progressed through the book I felt a deep sense of connection with women of all time.
Trustpilot
Copyright © 2022 Thriftbooks.com Terms of Use | Privacy Policy | Do Not Sell or Share My Personal Information | Accessibility Statement
ThriftBooks® and the ThriftBooks® logo are registered trademarks of Thrift Books Global, LLC