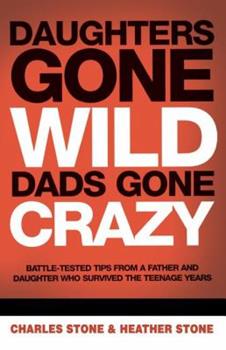 Fifteen psychologists, twelve secondary schools, four expulsions, four rehabs, two house-arrests and innumerable arguments... the cast and plot line for a season's worth of Law and Order ? No. This was the real-life drama of Heather Stone's adolescence. Now in college, Heather, the once rebellious teen, has sat down with her father to pen an insider's guide for parents and teens alike. Charles and Heather don't offer Cleaver family ideals or promise...

Published by Thriftbooks.com User , 17 years ago
This is a great resource for parents of teenagers who are facing the difficult challenges of adolescence in today's world. It is co-written from the perspectives of both the father of a rebellious teen and the former rebel herself (she is now an adult in nursing school). There is an ongoing narrative telling about the struggles of Heather Stone starting at age 13, as well as those of her parents, Charles and Sherryl. Along with their encouraging story, there are nine 'relational life preservers' to help those with similar struggles. There is a Christian perspective throughout this volume. Charles is a pastor and Heather is a prodigal daughter who has returned to her roots. Although I have been fortunate enough to avoid most of the extremely difficult situations that Charles and his wife faced with Heather, I recommend this book for any parent of a teenager. Even parents of teens who are not totally rebellious face many trying times through the adolescent years. The advice given will be helpful for any parent with teenagers.

A powerful "teaching memoir" that all parents should read

Published by Thriftbooks.com User , 17 years ago
A couple of years ago the movie Thirteen, staring Holly Hunter and Evan Rachel Wood, had people talking with its frank depictions of early adolescent drug use, sexual promiscuity, and emotional angst. Media outlets picked up on the public's level of shock that the movie would show 13-year-olds engaged in such behavior. "Maybe 16- or 17-year-olds, but surely not kids so young?! And not middle-class white girls!" seemed to be the general feeling. It didn't take long for adolescent psychologists to make the talk show rounds and confirm that this was, indeed, an accurate picture of how many young girls are starting to act out as they enter the teen years. And the movie only confirmed what pastor Charles Stone and his wife had learned the hard way, just a few years earlier, when their oldest daughter, Heather, turned 13. Today Heather is 22 and a committed Christian pursuing a career in nursing. But for five years she tore herself and her family apart with behavior that the word "bad" doesn't modify with justice. Emergency rooms, a manual labor camp, mental hospitals, and countless rehab units became the terrain of their lives. In DAUGHTERS GONE WILD, DADS GONE CRAZY, Heather and her father tell their story in a he said/she said format for which a courtroom scene (he said) sets the stage: "A handful of fidgety people sat in the nearly empty room. We took our seats in the back, and after a few moments the bailiff barked his customary, "All rise!" A dark-haired judge emerged from the side door. He seemed to float to his bench in his ankle-length black robe. I could feel my shoulders begin to tighten as we nervously sat in Courtroom A. 'Charles and Sherryl Stone vs. Heather Stone: Case number 43. Please come forward,' he bellowed. The bailiff opened the waist-high swinging door that led to the judge's bench. The judge motioned for us to sit at the well-worn Formica covered table in front of him. He peered over his black-rimmed glasses. 'So what's the problem?' he asked. With a dry mouth I muttered, 'We just can't handle our oldest daughter anymore. She runs away, stays out all night with boys, uses drugs and alcohol, curses us, and skips school. We've consulted a half-dozen psychologists. We've pled with her, fought with her, and grounded her. We're desperate. We need your help.'" The judge threatened Heather with an ankle monitoring device if she didn't start obeying her parents, but it would take a lot more before she was ready and willing to make changes. No longer opposing litigants, father and daughter want to provide hope, encouragement, and a few hard-earned bits of advice to others facing similar turmoil. DAUGHTERS GONE WILD, DADS GONE CRAZY is divided into eleven chapters, nine of which are devoted to what the duo calls "relational life preservers." They include #1 "Don't Panic at the First Warning Signs," #5 "Reconnect with Gifts from the Heart," and #7 "Chose Your Battles --- And Lose Some on Purpose." The first half of each chapter fea

Published by Thriftbooks.com User , 17 years ago
It's amazing to read of the downhill spiral of the relationship of this father and daughter (Charles and Heather). But then even more amazing to watch God put their relationship back together again. Lots of helpful advice here for parents and for teens (Heather writes directly to the teens while Charles writes to the parents). Read it if you're in a struggling parent/child relationship, or even if you want to just keep your current relationship healthy.

a "must read" book for hurting teens and parents

Published by Thriftbooks.com User , 17 years ago
As the author of "Relief for Hurting Parents," I read other parenting books with care to detail. I found "Daughters Gone Wild, Dads Gone Crazy" to be a well-written book that gives instant help and encouragement to parents who are doing their best to survive adolescent challenges and to recover and preserve their children. I sank to the depths of father-daughter pain with authors Charles and Heather Stone, but I also found myself laughing with them at the inadvertent funny things that occur when family matters are so-o-o serious. Their candid admission of mistakes allows readers to learn from their mistakes. Their successes and recommendations offer new hope to families who are still in the jungle from which the Stones have broken free. My counseling clinic is recommending this book to clients. -Buddy Scott
Trustpilot
Copyright © 2022 Thriftbooks.com Terms of Use | Privacy Policy | Do Not Sell or Share My Personal Information | Accessibility Statement
ThriftBooks® and the ThriftBooks® logo are registered trademarks of Thrift Books Global, LLC