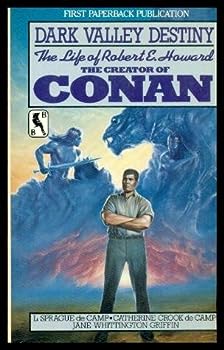 This description may be from another edition of this product. This is the definitive biography of Robert E. Howard, a giant of the pulp era, who created the archetypal brooding fantasy figure. To the general public, he is virtually unknown, but millions are...

Published by Thriftbooks.com User , 17 years ago
de Camp is always catching hell about something he wrote especially about REH and HPL. Dark Valley is highly readable. The text contains facts. de Camp does make judgments about his subject. This day in age we're trained not to judge anyone, so the book is refreshing. de Camp does succeed were many biographies fail and that is he makes the reader sympathetic about REH. REH is not just the subject about you can appreciate his life's difficulties. Any the book is highly readable. But I must add I'm biased toward de Camp . . . I've got an autographed copy.

The DEFINITIVE Bio on REH until a new one appears :)

Published by Thriftbooks.com User , 18 years ago
L. Sprague de Camp's biography of REH is a very credible (if admittedly somewhat opinionated) account. Frankly, I don't understand the nonsense that some reviewers spout about this book. It is plainly evident that de Camp conducted a good deal of research, being especially diligent to seek out and interview virtually everyone that had known REH. All in all, de Camp based his research on oral and literary sources as well as visiting and studying the places where REH had lived. The value of such was recognized long ago. One need only read Herodotus, Thucydides, or the greatest historian of antiquity, Polybius, to appreciate this. Ultimately, de camp's bio reaches tenable conclusions based upon his research.At this point in time, a more definitive bio seems somewhat questionable. There are probably very (if any) acquaintances of REH still living. This of course doesn't mean that future bios cannot be written, only that they will find it incredibly difficult to obtain any new material. Very few can ever approach an understanding of REH as de Camp did. After all, he spent a large part of his career as a fiction writer in editing and expanding the Conan series. Instead, future biographers will be sifting among the stones that de Camp has already quarried for them.Finally, while de Camp was not a professional pyschologist, that in itself does not necessarily disqualify him in analyzing REH's state of mind. The fallacy of expert opinion comes to mind here. Most biographers hold an area of expertise in only one or two fields, and often their subjects will carry them into sundry fields of exploration. That's one reason why professionals published their work, so that others can benefit from the fruits of their research. Geez, excuse my getting off track here a bit, but some people have the lamest, sorriest reasons for not enjoying de Camp's work and appreciating it for the fine work of scholarship that it is. (Accusing de Camp of writing articulate prose with the intention to deceive, as one reviewer suggested, only demonstrates that they are unfamiliar with his prose style.) Is D.V.D. perfect and without the occassional error found in most bios? By no means, but de Camp isn't trying to hoodwink anyone, and anyone with any critical faculties can disagree with some of his conclusions. That in itself is a sign of scholarship as de Camp has provided enough material to allow the reader to independently verify whether or not s/he agrees.

The Truth About REH is Unknown

Published by Thriftbooks.com User , 19 years ago
DeCamp describes Howard in his "Dark Valley Destiny" book, and Novalyne Price describes him in her "One Who Walked Alone" book. Both are probably right and probably wrong. Read both. If you want to understand REH, read his writings (and those of his biographers) and make up your own mind.His was a tortured soul. I could defend or criticize Howard on many different levels. The truth is (and I hope you agree)is that we've all lost something because his potential had never been fully realized.

Published by Thriftbooks.com User , 20 years ago
L. Sprague de Camp, whose recent passing saddened all of us who had had the pleasure of meeting him or reading his words, wrote on many different subjects. Among the other things he tackled was biography, and with this effort he produced what will probably be known as the definitive biography of the troubled Texan writer who created Conan, Solomon Kane, and King Kull. Although some of this material had appeared earlier, it was in amateur and semi-professional magazines of extremely limited circulation, and a great deal of it is material that could never have fit into those magazines, oriented as they were to the hardcore "Conan" fan. De Camp, his wife and his collaborator travelled through Texas to speak to the people who had known Howard in his own lifetime, as well as those who had merely experienced Texas in those years. Robert E. Howard was a troubled, moody man who escaped from an unsympathetic environment for a person with his bookish tastes into fiction. Besides Conan, Kane and King Kull, he produced fiction in many different areas, and sold to many different markets in the days of the "pulp" magazines. He was also quite a talented poet, and samples of his verse enliven this book considerably. Among the other ways this book is useful to a person wishing to know more about Robert Howard, it contains a bibliography of all the works the Texan created. Written in a clear, engaging style, this biography evokes a period long gone, but not all that far away.
Copyright © 2020 Thriftbooks.com Terms of Use | Privacy Policy | Do Not Sell My Personal Information | Accessibility Statement
ThriftBooks® and the ThriftBooks® logo are registered trademarks of Thrift Books Global, LLC