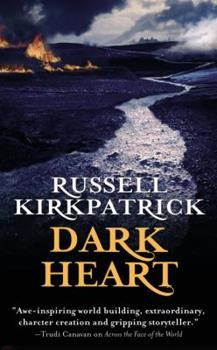 (Book #2 in the Broken Man Series)

Noetos and his reluctant companion are on the run. Hiding a powerful artifact from merciless pursuers, they know that time is against them. As the storm approaches, Noetos uses this to his advantage - but realizes that something terrible is about to be unleashed. A continent away, Lenares now leads the Cosmographers following the death of her mistress. Trained to detect the presence of the Gods, she can find no evidence of the Father. Is it possible...

Published by Thriftbooks.com User , 11 years ago
'Dark Heart' is the second book in 'The Broken Man' Trilogy by Russell Kirkpatrick. Arguably, it could be considered the 5th book in the ongoing Faltha saga, if you combined the two trilogies together, i.e. 'The Fire of Heaven' and 'The Broken Man'. Regardless, it is IMHO, the best of the all the series books thus far; the writing is crisp, clear and the story enthralling. This book continues with the tale of the journey of three different groups. They are all striving towards the same general destination, but not necessarily for the same reasons. Several members of the different groups have unsettling concerns regarding some unexplained happenings and events during these quests; concerns that are sometimes answered (and sometimes not) by the occasional unexpected meeting between members of the 3 separate groups. There are no goody-two-shoes in this diverse array of individuals. Personality traits, individual shortcomings and some hidden agendas make a significant difference in how this extraordinary tale unfolds; drawing forth some unexpected reactions and intriguing results. If anything, it is this quality that gives this book/series such a dramatic human touch. As I mentioned in my review of the first book of this trilogy (Path of Revenge) the overall 'pace' of this book/series has improved. And, although there is plenty of character development, there doesn't seem to be the same amount of in-depth soul searching, as was with Leigh in the final book of the 'Fire of Heaven' series. And again, in my opinion, this is a very good thing; a real enhancement in storytelling and readability. As an aside, this book also gave me some fond flashbacks to G.R.R. Martin's style of story telling. Anyone who enjoyed Martin's superb 'Ice and Fire' series will probably have some understanding of this particular comment. Maps: Several very good maps. Enough said. Conclusion: This to me, was the best of 5 books in this double trilogy that I've read so far. Kirkpatrick continues to improve as writer and story teller and is not afraid to explore new ideas; ideas that add zest and a compelling 'read-on' quality to an already great fantasy tale. 5 Stars Ray Nicholson

Published by Thriftbooks.com User , 11 years ago
Dark Heart is the second book in the Husk/Broken man trilogy. As we pick up where our characters left off, many of the mysteries of the first novel will be solved, and the situation the world is in will be more thoroughly explained. While all that is satisfactory, I feel that the books lacks a strong story lines. The characters are thrown around by the gods, to meet together in literial duex ex machina styles. The plot of the book seems to largly be drawn out explanation and then almost random violence, the revelation of the mysterious Dryman was well orcestrated, but the apparence of the undying man just lacks drama. The finale is quite strong, but I admit that its impact was reduced from the boredom of getting throught the book. I like the series, but I see Dark Heart only as a long necessary step towards the concluding novel.

A great second book in the series.

Published by Thriftbooks.com User , 12 years ago
Dark Heart is a sequel to Path of Revenge and follows the previous series on the Falthan war. (I'm not going to summarize the book here) This is a must read for any fans of Russell Kirkpatrick's previous books. This book continues with excellent action, plotline and character development (and no, I don't know the author). I look forward to the next book in the series.
Copyright © 2020 Thriftbooks.com Terms of Use | Privacy Policy | Do Not Sell My Personal Information | Accessibility Statement
ThriftBooks® and the ThriftBooks® logo are registered trademarks of Thrift Books Global, LLC