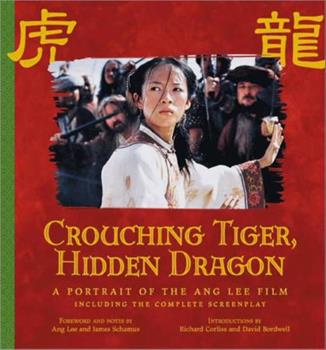 The winner of four Academy Awards, including Best Foreign-Language Film, Art Direction, Cinematography, and Original Music. To coincide with the Sony Pictures Classics releasethis elegantly illustrated moviebook captures the beauty, spirit, and extraordinary talents behind what TimeAsia heralded as an "instant classic...a rule-bending master-piece that weds martial arts with sense and sensibility." The latest film from Sense and Sensibility director...

A beautiful companion to a great film

Published by Thriftbooks.com User , 20 years ago
Like many filmgoers, I fell in love with "Crouching Tiger, Hidden Dragon," the Ang Lee film which blends historical drama, martial arts action, romance, and spirituality into a breathtaking cinematic experience. "Crouching Tiger, Hidden Dragon: A Portrait of the Ang Lee Film" is a visually stunning book which captures the spirit of the great film. The book contains the complete screenplay (in English), a foreword by director Lee, and many interesting notes and sidebars by those who crafted the film.The book is rich in full-color photos that celebrate the sumptuous beauty of Ang Lee's vision. Looking at the book, I gained an increased appreciation for the artistry and attention to detail that went into the design of the costumes, props, and sets for the film. There are many excellent portraits of the film's superb cast, particularly of Michelle Yeoh, Zhang Ziyi, Chow Yun Fat, Chang Chen, and Cheng Pei Pei.The sidebars are particularly fascinating. Many of them give insights into Chinese history and culture. One sidebar tells a little about Wang Du Lu, who wrote the novel upon which the script was based; another sidebar explores the relationship between "Crouching Tiger" and Ang Lee's 1995 film "Sense and Sensibility." The other sidebars are similarly informative.This book is a beautiful keepsake that will allow you to relive one of the most enchanting films ever made. Ang Lee, screenwriter James Schamus, and all others who contributed to this book have given a wonderful gift to the film's fans.

A World of Tigers and Dragons...

Published by Thriftbooks.com User , 20 years ago
Ang Lee's film, "Crouching Tiger, Hidden Dragon" is an absolute masterpiece; it's one of the best films I've ever seen, and I'm not easily impressed. This book, which includes the entire screenplay, is a worthy- if somewhat slight- companion to it. The book contains a number of beautiful color photographs, and commentary from Ang Lee, co-writer James Schamus, critic Richard Corliss (his Time magazine review, actually) and some background on the wuxia pian film genre the film's story is rooted in. If you're in love with the movie, you'll definitely want this book; having the entire screenplay is worth the price. What keeps it from achieving the five-star status the film surely will attain is that it really needs a bit more. I would've loved a more in-depth look at the film's production. The book has one sidebar on the beautiful costumes, and glosses over certain production problems (weather, digital wire-removal difficulties); at one point, Ang Lee writes how he doubts he'll ever be fully healthy again, but there's no explanation other than he worked extremely hard on this project. Still, it's marvelous to be able to read Jen Yu's (Zhang Ziyi) entire restaurant speech (from a particularly thrilling sequence where she battles about two dozen men) and Li Mu Bai's (Chow Yun Fat) touching valediction, delivered to Yu Shu Lien (Michelle Yeoh). The book's design work mirrors the film's antique look and is a nice match for its production design. While the film junkie (and "Crouching Tiger" fan) in me would love to read more about how they made this magical movie, I still recommend you check out "Crouching Tiger, Hidden Dragon: A Portrait of Ang Lee's Epic Film." But only after you've watched the film.

If You Loved the Movie, You'll Want the Book

Published by Thriftbooks.com User , 21 years ago
"Crouching Tiger, Hidden Dragon" is the most cinematic martial arts movie yet, as good or better than some of Kurosowa's Japanese samurai movies. The book has the entire screenplay and some stunning color stills from the movie. There are some brief, tantalizing sidebar vignettes about the cast, crew, and production. Like another reviewer, I would have liked more of this background information. But hey, I'm greedy!

Good enough to be owned

Published by Thriftbooks.com User , 21 years ago
I have to say I expected more from this book. I wasn't so much interested in the screenplay as in the background, technical and otherwise. A whole section, not just a capsule, on the wire work would have been nice for example. On the plus side, now that I know the screenplay by heart, I can go see the movie again without reading the subtitles, and with the full impact of the images. Furthermore, the book does boast some really nice color pictures (more, a lot more, of the stunning Zhang Zizi would have been appreciated). Not without faults, but if you love the movie, it is definitively a must-have, along with the CD.

not the movie, but close enough

Published by Thriftbooks.com User , 21 years ago
for anyone completely paralyzed by this film, this collection is a must companion to invest in. the screenplay at your fingertips (translated such that all elements of classic picture book mythology are traceable), along with ang lee as its editor... deeply roots these stories for its reader. as well, it discusses the parallelled challenges the performers in this film ultimately accepted and without a doubt, should be heralded for. the only question i cannot answer for you, and neither does the book, is how many times do you need to see this film, this pictorial novel, to understand its influence on world cinema & global beliefs even though it was created so recently, at the end of the 20th century.enjoy.
Copyright © 2022 Thriftbooks.com Terms of Use | Privacy Policy | Do Not Sell My Personal Information | Accessibility Statement
ThriftBooks® and the ThriftBooks® logo are registered trademarks of Thrift Books Global, LLC