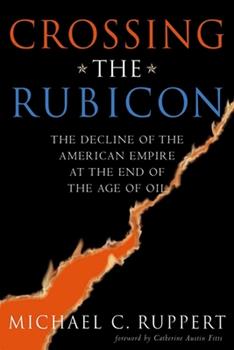 Crossing the Rubicon: The Decline of the American Empire at the End of the Age of Oil

The long-awaited expos of 9/11 and Peak Oil - by the "Godfather of 9/11 research." The attacks of September 11, 2001, were accomplished through an amazing orchestration of logistics and personnel. Crossing the Rubicon discovers and identifies key suspects--finding some of them in the highest echelons of American government--by showing how they acted in concert to guarantee that the attacks produced the desired result. Crossing the Rubicon is unique...

Ruppert was a true hero.

Published by Thriftbooks.com User , 2 years ago
This is a must read book about 9/11 with a very detailed time line.

Published by Thriftbooks.com User , 16 years ago
This book is important. [it's NOT by Catherine Austin Fitts as first-credited above (she writes the introduction). The author is Michael Ruppert] Crossing the Rubicon is comprehensive in scope and Ruppert uses well-honed investigative procedures to reveal key missing pieces in the investigation of 9/11/01. He also uses his vast knowledge of U.S. military procedure, protocol and policy to expose the inner workings of CIA, FBI, NSA, JCS, NORAD and FAA in detail that far exceeds that of the 9/11 Commission. Ruppert composes circumstantial evidence, eyewitness accounts, and actual testimony of participating agents and agencies from mainstream news sources, from Richard Clarke's Against All Enemies, from the 9/11 Commission's activities and Report and from on-the-record interviews of instrumental figures who reveal facts not published anywhere else. He takes focus on the "wargames" issue and exposes the FACT of numerous exercises conducted on 9/11 that included the use of false radar blips that clearly confused FAA, NORAD and JCS personnel, that resulted in the wildly distant assignment of aircraft, and that was the result of a very specific re-organizing and restructuring of air defense long before 9/11 and he thus comes to the conclusion of complicity and awareness by high-ranking members of the Bush Administration fairly. Ruppert conjectures from his research as to how the events could have been orchestrated but does so by composing a specific narrative of FACTS, reproducing work he conducted on his website [including revealing immense increases in "put" options that evidence foreknowledge by monied interests] and conducting original research and interviews. Ruppert identifies players who were involved, would have had to be involved and may have been involved and clearly points out amazing ommissions by the 9/11 Commission and 9/11 Truth researchers including the FACT that the deputy director of the National Military Command Center [a position required to coordinate NORAD,FAA and JCS in both wargames and real-world events] actually asked on September 10, 2001, to be absent from duty on September 11 between 8:30 and 10:30 a.m. [the exact time of the attacks], that this did occur despite the fact the the hijackings and attacks were already taking place and that no one has ever received an explanation why. [further Ruppert reveals that the Officer who replaced this important defense coordinating position was a long-time Bush Administration friend recently qualified to hold the position as the result of Bush appointment who filed the shortest testimonial in all of the 9/11 Commission's requested written depositions] Ruppert explores some fringe pursuits like the revelations of Vreeland, but far-more of the book is about the back-story, about the relevance of Peak Oil, about intelligence factors and about the workings of the U.S. military under conditions such as those on 9/11. Having interviewed Ruppert twice for Pacifica Radio, I can say he

Published by Thriftbooks.com User , 16 years ago
Mike Ruppert is unquestionably a great American hero. His book, Crossing the Rubicon, is the single most important book written in the last fifty years at least. The Patriot Act, Homeland Security and the lies about WMDs in Iraq have created a growing sense of unease in the collective unconscious. As a result, a growing number of intellectuals and every day citizens are begining to see the Truth and more and more people are begining to wake up every day. Crossing the Rubicon is at the forefront of this new awareness. Most reviewers here have already done a great job summarizing the content of Mike's book. The many five star reviews are well deserved. I want to write a note about the campaign to discredit Mike Ruppert and his book, a campaign which has apparently begun full blast. Another reviewer has already correctly noted how the few one-star reviews on this site follow the standard rules of organized disinformation campaigns. Through the use of innuendo, character assasination, and classic misdirection, several reviewers make it appear that the book rests its case on a handful of issues, such as the Vreeland case. In fact, all 696 pages are saturated with enough well documented and diverse evidence to prove the 911 criminal conspiracy many times over while adhering to the highest possible journalistic standards. Mike makes a case that could actually hold up in a court of law, whereas the establishment case for 911 could not even hold up in a high school debate. Quite a pathetic comment on the state of our society but I digress. The most comically pathetic aspect of the disinformation campaign is a new "conspiracy website TV show" which proceeds to slam Ruppert in a laughable thirty-minute video. They make such shocking claims that Ruppert is "rude...impolite...a liar, blah, blah, blah" without offering anything substantive to back up their "claims". Anyone with even a degree of clear perception can clearly see that these people are either operatives with very poor acting skills or low grade actors hired by operatives. The lack of sincerity in their eyes, their nervous body language and laughable "faux-left-wing" wardrobe and demeanor betray an obvious Wag the Dog operation. A little research into their website and published books indicate that the entire operation has been slapped together in the last few months, no doubt to coincide with the publication of Crossing the Rubicon. This type of thing might fool the sheeple who think CNN is their friend. But those of us who have already seen the underbelly of the Propaganda Beast can only shake our heads in sad amusement. What a joke. Ruppert is wise to simply briefly address their libel on his own site but otherwise ignore them. As Crossing the Rubicon gains ground, one can only imagine what new lows the disinformation campaign will hit. What's next? Websites that scream: Mike Ruppert Married Satan and Gave Birth to a Pink Alien Octopuss who Molested your Mother!! Don't TRUST HIM!! Hang in t

A word from the book's editor, Jamey Hecht

Published by Thriftbooks.com User , 16 years ago
I'd like to extend my thanks to everyone who has reviewed Crossing The Rubicon, and to everyone who has read the book. And a special thanks to those who have done both. Let me reply to a recent review by a Mr. Watson. "Already some of his witnesses are unravelling as in the case of Mike Vreeland." The sentence starts with the plural, but it really refers only to Vreeland -- whom the book describes as utterly unreliable EXCEPT in the special case of his 911 warning. Why? Because the warning was a physical document whose authenticity and pre-9/11 provenance have been attested by Vreeland's lawyers, court records submitted under oath, interviews with the attorneys, former Canadian federal prosecutors, and news media. At no point does Ruppert's use of Vreeland depend on the latter's personal credibility. Then Watson refers to the exchange between a "Victor Thorn" of "Wing TV" and Mr. Ruppert. For a complete and accurate account of the matter, including Wing TV's questions and Mike Ruppert's answers, see Ruppert's website, page: http://www.fromthewilderness.com/10questions.shtml Watson continues: "The improbability of such an event [9/11] being pulled off under the noses of every uninvolved government/military official is not discussed." It is discussed at length -- see pp. 2-4; 12-18; 103; 203-224; 291-306, et al. "Ruppert asks us to believe that Bush/Cheney could pull 9/11 off with such precision and them fumble so publically with WMDs in trying to connect 9/11 with Saddam - which he states was their main reason for 9/11 - an excuse to grab the oil." Ruppert does not say any such thing. Nobody who had read this book could possibly come away with the view that the Iraq war was the "main reason" for 9/11. "Plenty of dots, but not many connections. Indeed, given enough dots, one can connect any kind of picture one wants." Yes, and this applies to the official story (the conspiracy of 19 highjackers and the man in the Afghan cave), and to the 26-volume "Warren Report," and to every other text. The job of an investigator, like that of a lawyer or an historian, is to configure an accurrate interpretation whose logic is more compelling than the others. This is achieved through a combination of sound evidence gathering and valid argumentation. Mr. Ruppert has produced both in abundance.

Published by Thriftbooks.com User , 17 years ago
I buy and read a lot of books. I tend to buy books that expose the corruption of our political and economic system. My mother always asks me why I don't write my own book that ties everything together. I tell her that it would be a job that would take year. I do not have to do this. Mr. Ruppert has. I just placed an order for 34 copies to be mailed to my friends and relatives (and a few web masters that I want to educate). If you think this is a long read, then just read the introduction, chapter 1, and the last chapter. I do believe you will find the time to read the rest. One of my personal interests is the precious metals market. I have made a ton of money in this area. If you follow his recommendations and read from the web sites he mentions, you may find yourself making a lot of money. There are only a trillion barrels of oil that can ever be recovered left. We are using up 80 million a day. That is before India and China ramp up their consumer (automobile) culture. And yes, this book lays it on the line and says that Bush and Cheney did 9/11. They made it happen. Read this book.
Copyright © 2020 Thriftbooks.com Terms of Use | Privacy Policy | Do Not Sell My Personal Information | Accessibility Statement
ThriftBooks® and the ThriftBooks® logo are registered trademarks of Thrift Books Global, LLC