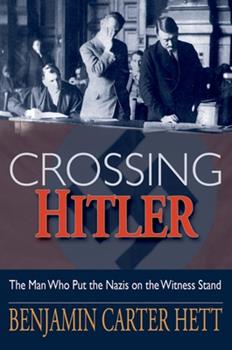 Crossing Hitler: The Man Who Put the Nazis on the Witness Stand

During a 1931 trial of four Nazi stormtroopers, known as the Eden Dance Palace trial, Hans Litten grilled Hitler in a brilliant and merciless three-hour cross-examination, forcing him into multiple contradictions and evasions and finally reducing him to helpless and humiliating rage (thetranscription of Hitler's full testimony is included.) At the time, Hitler was still trying to prove his embrace of legal methods, and distancing himself from his...

Published by Thriftbooks.com User , 12 years ago
This is the story of Hans Litten, the German (and Jewish) lawyer who brought Hitler to trail for his relationship to the SA (Storm Troopers). Unfortunately, Litten's heroic cross examination of Hitler brought him a life of woes including exclusion as a practicing lawyer and ultimately ended with Litten in a concentration camp where after five years he took his own life. I greatly enjoyed this book because this is truly a story of a profile in courage and what the cost of that courage was. This was the first time I had read or heard about this trial or Hans Litten and I found it to be a hard to put down book. I read it from beginning to end in only three sittings. I would highly recommend this book to anyone who would like to know more about Hitler's rise to power, his personality and about a true hero, Hans Litten, who suffered untold misery (and documented tortue) due to his legal pursuit of Hitler and the SA. This book is the embodiment of what it means to give your life for the common good and for what is right. An intriguing and thought provoking read reminding all of us of that there were those that tried to stop Hitler and what the consequences were.

"The challenge of confronting Hans Litten"

Published by Thriftbooks.com User , 13 years ago
It would have been easy enough to have written a biography of Litten which simply painted him as prescient, courageous & heroic. Certainly he was all of these things. How to explain why he made the choices he did is a tad more difficult; in the epilogue, Benjamin Hett discusses the various versions of Litten (Communist warrior or Christian martyr --- take your pick) which have evolved over the decades. Hett concludes that there was no single motivation for why Litten fought these battles, and that perhaps Litten himself could not have satisfactorily explained it, other than to say that it needed to be done. As it is, we the readers are treated to a gripping slice of history, where one determined lawyer came close to descrediting Hitler and possibly derailing his movement. He very well could have done it (he or other determined lawyers in Germany), except that the legal establishment did its gosh-darndest to make it as easy as possible for the Nazis to take power and then consolidate their grip. The complicity of the judges, lawyers and police in allowing the thuggish, quasi-legal (at best) Nazis make the move into legal respectability is a central theme in Hett's book. Litten was not just fighting against the Nazis --- he was also fighting against an often reactionary system (the request by Superior Court officials to have Hitler return portraits of Kaiser Wilhelm II to the court rooms is most illuminating) which was equally determined to keep a trouble-maker like Litten in check as it was to assist a movement dedicated (so it said) to law and order. That so many people were willing to overlook the unlawful and disorderly nature of the Nazis made it well nigh impossible for Litten to win. For those who don't know how the Nazi regime progressed in its early years in power, Hett's book provides good illustrations as to how things evolved. The Third Reich can be broken down into several stages, and Litten experienced them all first-hand through his imprisonment. An initial pummelling at the hands of SA goons then made the transition to a more orderly imprisonment where intellectuals like Litten could enjoy scholarly pursuits during their confinement. Traditional prisons then gave way to the concentration camps, the nature of which was growing ever more ominous when Litten had decided that enough was enough and took his life. He spared himself the horrors which were to follow. All in all, Hett has presented a wonderfully thorough and well-researched book which examines and incredibly complicated man. Another reviewer commented on the similarities between the personalities of Litten and Hitler, and I too was struck by this as I read it. How can it be that someone we regard as heroic could also remind us in some ways of Hitler himself? There are no easy answers here, and Hett does not try to make it easy. This is very much to his credit.

Published by Thriftbooks.com User , 13 years ago
The source escapes me at the moment, but someone once said that those who fail to learn history are doomed to repeat it. When looking at the Holocaust, one might wonder if there was there anyone who was in a position to try and stand up to those who were instrumental in bringing it about. And if there were, what their fate was? "Crossing Hitler" tells the true story of a lawyer, Hans Litten, who seemed to have done about everything he could to deliberately antagonize Hitler. and the grim aftermath. Litten grew up in an upwardly mobile Jewish-German middle class. During the 1931 Eden Dance Palace trial, he forced Hitler to testify as a witness against the Nazi storm troopers accused of assault and attempted murder. Post-trial, Hitler who had a long memory, vowed revenge. L. is not the only hero in this book. Others include Max and Margot Furst, longtime friends and fellow activists who with his mother, Irmgard Litten waged a long, crafty and doomed attempt to have Litten released from the concentration camps. The book is full of incidents that prove that truth is often stranger than fiction, such as the SS guard who believed that Litten would be able to represent him in court while incarcerated. It's also an absorbing account of an unique historical figure.

Published by Thriftbooks.com User , 13 years ago
"Crossing Hitler" is a fascinating read. Being unfamiliar with Hans Litten's story, the book offers an illuminating behind-the-scenes portrayal of a little known but very important part of history. Litten's cross-examination of Hitler was astounding; what a moment in time! From a purely Jewish perspective, I feel proud knowing that such an episode occurred and that this brilliant young attorney had the strength and fortitude to stand up and fight for the courage of his convictions. I also feel personally enriched for having had the opportunity to "experience" this episode, and to be acquainted with so noble a human being who placed moral value and the lives of others before personal safety and well-being. That he paid the ultimate price serves only to underscore the importance of his mission and his gift to the world.
Trustpilot
Copyright © 2022 Thriftbooks.com Terms of Use | Privacy Policy | Do Not Sell My Personal Information | Accessibility Statement
ThriftBooks® and the ThriftBooks® logo are registered trademarks of Thrift Books Global, LLC