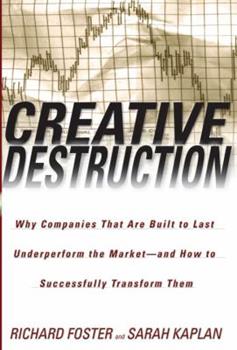 Creative Destruction: Why Companies That Are Built to Last Underperform the Market--And How to Successfully Transform Them

Turning conventional wisdom on its head, a Senior Partner and an Innovation Specialist from McKinsey & Company debunk the myth that high-octane, built-to-last companies can continue to excel year after year and reveal the dynamic strategies of discontinuity and creative destruction these corporations must adopt in order to maintain excellence and remain competitive. In striking contrast to such bibles of business literature as In Search of Excellence...

Captialism Is Ruled by the "Gale of Creative Destruction"

Published by Thriftbooks.com User , 16 years ago
This is an unbelievably well-written delineation of the state of captialistic economy. 'Creative Destruction' refers to the force behind the expanding capitalistic empire. It is a phrase coined by Joseph Schumpter in the 30's. Business leaders of today that get caught in cultural lock-in will fail tomorrow. A business needs to transform and re-evaluate itself against the currents of the constantly changing market, or fall as prey to those that do. Old-time rates of change were much slower and seemed to give credence to pure branding and operations quality over innovation. However a closer look will reveal that these companies averaged only a sixty year lifespan. Modern companies on the S & P 500 are only averaging a ten year lifespan due to the accelerating rates of change. This is an age of discontinuity. There is no longevity to the conservatism of yesterday. This book explores the ways of creative thinking... how to foster it... and what fear mechanisms destroy it in the upper levels of corporations. It gives ideas on how to evaluate affiliations and acquisitions. On a humorus note, Enron is cited as an example of success based on this approach. They are quoted 'we hire smart people and pay them more than they think they are worth.' and there are 'no punishments for trying (risking).' Seems like it is always best to be careful who you let guard the cookie jar. Truly a great read by the highly respected Senior Partner and Director of McKinsey & Co. Five Super Stars

The Link Between Innovation and Value Creation Is Explored

Published by Thriftbooks.com User , 21 years ago
The authors score a direct hit on those - investors and managers alike - looking for the continuous, corporate value creator. It simply does not exist.There is no question that there is a direct link between innovation and wealth creation. Using a proprietary database developed by McKinsey & Company to study the life cycle of American corporations, the authors demonstrate, what they term as "the corporate equivalent of El Dorado," the company that continually outperforms the stock market does not exist. It is a figment of the "one decision" crowd that resurfaces with each generation of investors.Capital Markets reward shareholders of competitive corporations and then rapidly, and with no remorse, forget them when they lose their ability to innovate. The McKinsey data show corporations, which operate with management philosophies based on the assumption of continuity, do not change at the pace and scale of the markets. Therefore, in the long run they fail to create value at the pace and scale of the markets.Corporations are premised on continuity; their focus is on operations. Capital Markets are premised on discontinuity; their focus is on creation and destruction. They are less tolerant than the corporation of underperformance. "Blue Chip" corporations earn the right to survive. They have no claim on superior, or for that matter, even average long-term shareholder returns.The reason is simple, the authors conclude. Corporate control processes, the very processes that ensure long-term survival, inure them to the need for change.This is a book every serious investor should read. The message is spiced with case studies of how corporations like Johnson and Johnson, Enron, Corning and GE transform daily themselves rather than opt to incrementally improve operations. Managements need to create new businesses, abandon ingrown rules and structures and be continually adopting new decision-making processes, control systems and mental models.As the book's subtitle suggests, corporations must strive to be as dynamic and responsive as the capital markets if they are to reward investors with long-term superior returns.

An Excellent and Worthwile Read

Published by Thriftbooks.com User , 21 years ago
Foster and Kaplan take dead aim at the "built-to-last" crowd -- the cluster of authors of a few years ago that trumpeted company longevity as the ultimate goal. Unfortunately for that crowd, "Creative Destruction" presents its case backed up by something the "built-to-last" case lacked -- comprehensive data -- and the data strongly suggest that companies built for longevity consistently under perform the market in shareholder value creation.What is very clear from the data is that value creation is driven by innovation -- and the innovation tends to come from new entrants. This key point is a validation, through enhanced quantification, of Clayton Christensen's views on the problem of corporate incumbency. What is also clear is that the transition period between new entrant and incumbent is increasingly compressed. Fifty years ago an innovative new business model might have been good for above average returns of a couple of decades -- now perhaps five years is a more realistic outcome. There clearly are examples, though the exception rather than the rule, of companies reinventing themselves in the quest for superior value. Enron is such an example, as is Corning. Schwab is another example. Common characteristics of these re-inventors is that they try a lot of things and they fail a lot -- but they know how to manage the failures and they know how to really ride the winners. This book should also give pause to any executive who, having recently witnessed the demise of many Internet-based models, is feeling more secure. The reality is that the first wave of barbarians may have been fended off, but they will be back, stronger and smarter than ever . . .

A ?must-read? for Senior Managers in the 21st Century

Published by Thriftbooks.com User , 21 years ago
Foster and Kaplan provide a radical new perspective for today's senior managers. Through analysis of over a dozen industries spanning four decades of time, the authors attack the conventional wisdom that companies are "built to last". They show that the turnover rate for companies in the S & P500 has increased six-fold since the first half of the century meaning that just a quarter of today's major corporations will exist in 25 years! Operating on pre-conceived notions of survival, today's managers will fail to transform their companies into organizations that can keep pace with this era's relentless pace of change.Using clearly written anecdotes and vivid examples from real companies, Foster and Kaplan provide managers with valuable lessons from companies in the past and prescriptions for the future. First, managers need to understand that companies are not destined for continuity and must continually re-invent themselves to survive. New entrants (commonly referred to as "attackers") have become increasingly important parts of the economy -- accounting for as much as three-quarters of the recent superior performance of the markets. Second, companies can benefit by realizing that their industry is their destiny -- that a company's performance largely tracks the industry in which it plays and that sustained out-performance of one's industry is rare and noteworthy. Finally, and perhaps most importantly, Foster and Kaplan help managers understand what prevents change within their organization and how managers can build companies that effectively balance the forces of creation and destruction. Managers everywhere would benefit from this easy-to-read, thoughtful, and instructive text on today's most pressing management challenges.

Published by Thriftbooks.com User , 21 years ago
Contrary to popular belief, Foster and Kaplan show that the majority of so-called "buy and hold" companies fail to keep pace with market index funds. Fundamental changes in the marketplace have made it increasingly difficult for companies to remain competitive for sustained periods of time. The authors not only discuss these shifts in the environment, but also uncover the structural factors inhibiting companies from effectively reacting to these market changes. Traditional models of corporate planning and control combined with "cultural lock-in" prevent even the most innovative of companies from taking the difficult decisions required to evolve with the market. Foster and Kaplan convey this message, its implications, and potential remedies through colorful, easy-to-read case studies of successful and unsuccessful companies. So what can an investor do? First, understand the reasons why only a few companies have the ability to continually re-invent themselves for sustained shareholder value. Second, be thankful when an investment outperforms the market for more than a few years time and question your broker's recommendation to "hold on to the winner." Finally, realize that strong past performance is not guarantee of future returns and might even be reason not to invest in a company, since the odds are stacked against continued outperformance. This is a 'must-read' for investors everywhere!
Trustpilot
Copyright © 2022 Thriftbooks.com Terms of Use | Privacy Policy | Do Not Sell or Share My Personal Information | Accessibility Statement
ThriftBooks® and the ThriftBooks® logo are registered trademarks of Thrift Books Global, LLC