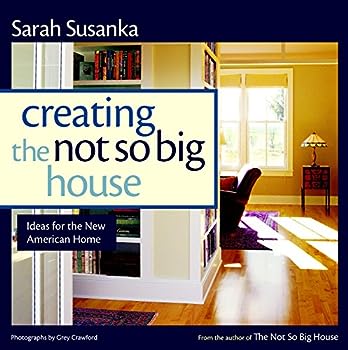 Creating the Not So Big House: Insights and Ideas for the New American Home (Susanka)

This description may be from another edition of this product. The Not So Big House created a movement that is changing the way people think about the American home. That groundbreaking book proposed a new blueprint for the American home: a house that values...

Published by Thriftbooks.com User , 20 years ago
Here, Susan Susanka picks up where she left off in The Not So Big House. In some places, it seems that this book is almost a response to the negative reviews in this forum of her first book. One of the most important additions is a sidebar on page nine, where she clarifies the meaning of Not So Big: ". as a rule of thumb, a Not So Big House is approximately a third smaller than your original goal but about the same price as your original budget. The magic is that although the house is smaller in square footage, it actually feels bigger. I'm not advocating that people live in small houses and get used to feeling cramped. A Not So Big House feels more spacious than many of its oversized neighbors because it is space with substance, all of it in use every day."In summary, this is not a way to save money, but a way to use the existing budget more effectively. The money saved on square footage is invested in the little things that make a house a home: built i!n bookcases, storage solutions, clutter areas, reading nooks, and other architectural features which most designers omit.In principal, there is no reason these ideas could not be applied to any style and to any budget. Susanka unwittingly raised the first question in her original book, when many critics complained of the sameness of design. She answers it here. The bulk of the work is a survey of 25 projects of other architects from around the country. Because so many designers are represented, we see a much greater variety of styles in this book. If there is a common thread among these projects, it is the use of partial walls, which divide spaces while keeping sight lines open. Rooms are constructed on a modest scale, but seem larger because of the design. Spaces are also defined by variations in ceiling heights, a device which can be as inexpensive as a soffit. The designers also put a lot of thought into built ins and other little touches which make a big di!fference everyday living. There is also a great deal of good design here, and some (but not all) of the ideas can be achieved without a large budget.The organization of the book invites browsing. One tends to pick out sections in random order rather than cover to cover. There is a great deal in this book which doesn't appeal to me as an idea for my own house, but I still enjoy the range of ideas which are represented here.In her final chapters, the author raises, but does not settle, the second question: whether such designs are possible for a project on a tight budget. She talks at great length about the factors which add to the cost of a house. In the two final examples, both from her own firm, she presents two versions of the same house: the Back to Basics House, and the Whole Nine Yards House. The two use the same basic footprint, but there the resemblance ends. The first uses inexpensive materials and a minimum of detailing. Visual interest was added with !careful attention to paint color and occasional lowered soffits. The second hou

Published by Thriftbooks.com User , 21 years ago
The photos in this book are really gorgeous! The creative use of wood, stone, color and decorative touches make small spaces both functional and visually appealing. There are numerous unexpected storage spaces which help keep small areas tidy-looking. There are also examples of renovations which help make small spaces look bigger. Small doesn't have to mean dark, drab and crowded. This would be a great gift for a pack rat or anyone who lives in a small home.

Better than The first book

Published by Thriftbooks.com User , 21 years ago
It's rare that a sequel is better than the original. This was one of them. Where The Not So Big House was pretty and pretty much content-free, this book provided real floorplans, and real houses, which I feel helped to communicate Susanka's ideas more clearly. I also found this book far less irritating than the first, and therefore more useful, in no small part because some of her hard -- and alienating -- positions have been considerably softened. No longer does she claim that dining rooms are obsolete because "nobody uses them" (I do). She seems much more willing to accept that there are lots of different lifestyles out there, and a house should be built to work with the lifestyle of its owners.If you are in the planning phases for a new house, or are just looking for ideas on how to make your current house more liveable, this is an excellent resource. In fact, I would suggest that you skip the first book altogether.

Published by Thriftbooks.com User , 21 years ago
I have read this book, as well as Ms. Susanka's previous book, The Not So Big House, and I have found this latest edition particularly clarifying for me in the concepts of the NSBH. It has concrete example after example of the design principles that Ms. Susanka discusses in her first book, then reviews these principles at the beginning of Creating the NSBH so that if the reader hasn't read the first book, they can still follow along very intelligently and get some great ideas for their own NSBH. As a residential builder/developer, Ms. Susanka has put forth a new paradigm in residential architecture, on the cutting edge much in the same way as does Martha Stewart promote in her various media outlets, and her passion for hearth and home is as strong or stronger than Martha's is. Whether or not you like Martha, she is the expert in homemaking in America today, just as Ms. Susanka is the expert in residential architecture that feeds the soul and creates a balance of quality vs. quantity, and cost vs. being cheap. I highly recommend this book as well as her previous book. I also agree with the previous reviewer's comment that A Pattern Language was written for design professionals and is generally too technical for the average lay person. Our company is employing the design principles Ms. Susanka promotes in her books, and to date, we have had good success with them.

More depth than her first book

Published by Thriftbooks.com User , 21 years ago
I'm a big fan of the Not So Big House and had great expectations for more from Sarah Susanka. Creating the Not So Big House really lived up to my expectations. I agree with the reviewer who said many of the ideas came from A Pattern Language. But as good as that book is, it's ideas are mostly hidden from homeowners (non architects like myself) because of its density and eccentric character. And A Pattern Language also doesn't speak to me in language I can understand, with examples I can relate to. Creating the Not So Big House translates these timeless ideas into real houses that were built for real people. It helps me see how a good house works.
Copyright © 2020 Thriftbooks.com Terms of Use | Privacy Policy | Do Not Sell My Personal Information | Accessibility Statement
ThriftBooks® and the ThriftBooks® logo are registered trademarks of Thrift Books Global, LLC