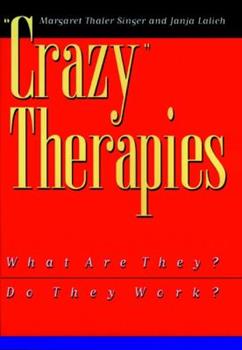 Crazy Therapies: What Are They? Do They Work?

A startling--and often downright amusing--expose of the alternative philosophies and practices that can be found in today's ever-growing psychotherapeutic marketplace. The book describes actual case histories of people who participated in a variety of controversial therapies, including alien abduction, past lives regression, and aromatherapy.

At last! Some much needed balance and perspective.

Published by Thriftbooks.com User , 16 years ago
An unfortunate but inevitable feature of the psychotherapy and holistic therapy fields is that theories and techniques tend to be supported by hype, anecdotal evidence, and personality cults. We are still a long way off cutting through the smoke and mirrors to arrive at objective and evidence-based conclusions. It is true that Crazy Therapies can seem a little biased and negative in places but that is an equally inevitable conlusion that comes from "over-selling" therapies of dubious validity, or even taking moderately effective techniques and portraying them as quick fixes or miracle cures. The proponents (salesmen?) of the therapies criticised in this book will probably post reviews attacking the authors. At the end of the day people need to decide for themselves what to believe but their decision should be an informed one, taking account of both the pros and cons of each approach. The criticisms, which prevail in the scientific literature, have been massively under-represented in the popular literature so this book goes a small way to filling an important gap and helping to restore some balance to things.

Separating the shaft from the wheat

Published by Thriftbooks.com User , 16 years ago
This is an excellent book for those who are simply interested in the topics presented, who are involved in any of these "therapies" or thinking of seeking them out. There were a number of therapies I have never heard of - maybe because I don't have television or read New Age garbage - or (possibly) because some of the therapies are no longer used (the book was published in 1996). I was truly stunned at how cruel, dangerous, and wacko some of these treatment modalities are. For example, Neural Organizational Technique (NOT) used on dyslexic and learning-disabled children is supposed to "correct blocked 'neural pathways' by means of painful and stressful 'adjustments' of the bones of the skull." In other words the practitioner "attempts to move the skull bones." The chiropractor who developed this ridiculous treatment must have been absent on the day they taught skull anatomy. If not he would have known that the skull bones are fused and do not move. As the mother of a six-year old boy with delayed speech recalls, "They were applying such tremendous pressure to [my son's] skull and the roof of his mouth that they would break into a sweat and their bodies would just shake with the force of their exertion." Unbelievably, this technique is still practiced today (I just did a Google search and the first two websites listed were about the wonders of this therapy). I know that "recovered memories" of alien abduction therapies are still around because Harvard professor John Mack is still around. Past-life regression is still around, as well as rebirthing - although this procedure has resulted the deaths of some children (Milwaukee, Colorado). Criminal charges have been brought against a few of these incompetents. In addition, children and their families have been torn apart as the result of the discredited therapy of facilitated communication (see http://www.skeptic.com/eskeptic/06-05-25.html to start). Not to minimize all the damage done to patients/clients presented in 'Crazy Therapies,' while reading this book I couldn't help but wonder about the gullibility of so many people in need of help. I am sure that people enter these therapies out of desperation, but also because of all the hype that goes along with these cure-alls. Why anyone would consider a recommendation from a celebrity as some kind of testimonial to the effectiveness of any of these modalities is beyond me. But we are living in a society where magical thinking has replaced common sense and the evidence presented in peer-reviewed journals of random, double-blind studies is ignored or rejected (a favorite excuse among Alternative Medicine practitioners is that their treatments or claims cannot be tested - not good). The results of a 2001 Gallup Poll showed the following beliefs in the general population: 54% of people believed in psychic/spiritual healing, 42% believed that houses can be haunted, 41% believed in satanic possession, 36% in telepathy, 25% in reincarnation, and 15% in chann

Published by Thriftbooks.com User , 19 years ago
Not just about alien abductions and satanic cults, this book helped me see that the "normal" therapy group I was in was a cult. The therapist I was involved with claimed that those of us in her "community" were healthier than average people and that the recovery she provided could not be found anywhere else in the world!Singer also describes the dubious nature of some of the common practices in psychotherapy, like rebirthing, that are ineffective and also potentially dangerous.Most importantly, Singer states that there needs to be an FDA type body to monitor all these people. The therapist that "treated" me belonged to the ACA which has been extremely professional in handling my complaints, but Singer's point is an excellent one.

A useful and cautionary guide for patients

Published by Thriftbooks.com User , 22 years ago
Crazy Therapies surveys the disreputable world of therapy charlatans and wackos who base their methods on untenable theories and promote ideas that range from absurd to dangerous. The work is useful for anyone to read, though it is primarily directed at current or prospective patients. While an immediately appealing aspect of the book is its anecdotal recounting of the ridiculous (alien abduction, past-lives regression, the inner child), its competence and commendability lie in the practical guidelines it provides to those seeking therapy, in order to avoid harm and fraud at the hands of incompetent practitioners. An embarrassing but necessary review of the current state of psychotherapy. Sure to enrage.
Trustpilot
Copyright © 2022 Thriftbooks.com Terms of Use | Privacy Policy | Do Not Sell or Share My Personal Information | Accessibility Statement
ThriftBooks® and the ThriftBooks® logo are registered trademarks of Thrift Books Global, LLC