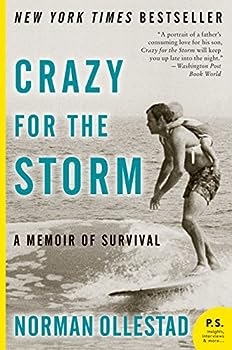 Crazy for the Storm: A Memoir of Survival (P.S.)

Destined to stand with other classic true stories of man against nature--Into Thin Air and Into the Wild by Jon Krakauer; Sebastian Junger's The Perfect Storm--Crazy for the Storm is a literary... This description may be from another edition of this product.

AN ADVENTURE OF A LIFETIME (and then some!)

Published by Thriftbooks.com User , 13 years ago
I loved this book! I started it..... and had to go to bed when I was 3/4 through it..... and couldn't wait to get home from work the next day to finish it. When I went to Youtube and watched the video of little Norman giving his TV interview after the incident, I could not believe how little he looks! He was just a little boy! Eleven years old! He did what many survivalists I have read about could not do.... he came to a quick conclusion (that he had to get off the mountain NOW), and he executed his plan and it worked out for him, thank goodness. Of course he credits his father for teaching him the skills to do what he had to do to save his life, but of course I never forgot for one second that he was IN this predicament BECAUSE of his father, so it's a good thing it worked out for him. He showed presence of mind and an impressive fortitude that many adults don't have. I loved the brisk writing style; it had just enough description to place the reader in the spot, but not enough to get in the way of the action. The book left me with a few questions at the end: What became of his mother and her abusive alcoholic boyfriend? Did she continue as an elementary school teacher? Also, what kind of education did the author finally get? It mentions that he went to UCLA, but that could just mean that he took one class. I do have to say that I was quite disturbed that he is now treating his son pretty much the way his father treated him, falling just short of the extremes. The scene at the end of the book when they are skiing and his son is bawling his head off because he is so scared made me mad. HOW could he watch his son in the very same agony he had been in so many times? It just doesn't make any sense to me. I kept thinking about that scene in the movie Giant where Rock Hudson's son is placed on a huge horse and he is crying his eyes out, but his dad makes him ride it anyway. Hello? Not EVERY son wants to do, or is capable of doing, what his father does. Is this hubris on the part of the adults? Or stupidity? Or payback time? In any case, the book is certainly a rip-roaring account of survival and I am glad the author finally got to write it. I am sure the plane crash and its aftermath have haunted him in some way or another for all these years. Maybe now he can put it behind him. Maybe now he can let up on his son and see what his SON might want to do with his life. After all, the author had always wanted to be a writer, and now he is doing it. I wonder if he would have been allowed to write had his father lived longer?

Norman Ollestad wishes he had a normal life.

Published by Thriftbooks.com User , 13 years ago
Skateboarding with the guys, watch TV, and trading baseball cards, etc. However, he has a father that pushes him for much more; Surfing, Skiing, and more surfing. Norman senior for a lack of better words was a maniac with a lust for life. He would not stand for his boy to be "normal" when there was so much to experience such as the perfect wave or perfect powder. I didn't know it but Norman senior was a child actor who was a part of the original Cheaper by the dozen. He went on to write one of the first books challenging the legend of J. Edgar Hoover and the flawless FBI. Norman Sr. lived life to the fullest and managed find something good in anything and any situation. To some degree the man was obsessed with his passions and the way he drove of his son to reach for great heights and most of all to never give up. What was funny is that I was thinking what he put his son through would not be tolerated these days and to my surprise the author writes about telling his son the same thing. There is a photograph in the front of the book where it shows Norman Sr. carrying the author on his back (he is about 1ish) while surfing. It would be easy to find people today that would be horrified by this. The book is a great memoir with some rather candid writing of a boy coming to age as he deals with the frustrations of life trying to fit in when he doesn't realize he has something special. There are many adults who would love to have had the life of this boy. The stories of Norman Sr. can amaze at times. Almost to a point, one might wonder if he was too perfect. However, the author does show he had flaws. One story that stood out for me was when the author talked to his mother about surfing and asked why she gave it up. She told him she took up surfing because his dad liked it and she found him more attentive when they surfed. When they divorced; she didn't see the need for it anymore. One of the things I found myself wondering is if the plane was sabotaged especially when considering how ruthless Hoover and his followers tended to be in those days. However, the author explains what happened when after 27 years he worked up the courage to obtain the National Traffic and Safety Boards report on the incident. He asked a friend who was a seasoned pilot to review it and the friend reported "You were doomed from takeoff." The whole thing was such as waste. There will be people that would argue over what Norman Sr. did with his boy but you can't argue that it was that drive that allowed this 11 year old boy to basically slide down the side of a mountain using branches as ice picks to drag and control his decent. The fact he was able to do this injured after watching people die is simply amazing. This book was a great read which I finished it in two days. I was simply fascinated by the accounts of the adventures and the accident, the surfing culture and the mention of people like Charles Manson!

A Tale of a Plane Crash - and so much more

Published by Thriftbooks.com User , 13 years ago
This isn't my type of book, but I managed to finish it in two days. This is the story of a plane crash at 8600 feet in a snowstorm and how an 11-year-old crawled and slid down the mountain to safety. It's a story about death, but it's even more about life and living life to the fullest. It's about how a free spirit father forced his son to push through fear to experience life. I wasn't sure about the writing style at first - Norman Ollestad trades chapters back and forth between the crash and immediate aftermath, and events that happened the year before and up to getting in the plane on that fateful morning. There is a lot of dialogue in this book, but there are no quotation marks, which threw me for a chapter or two, but then lent the entire story a hazy, memory quality to. It almost had a stream of consciousness feeling to it, though the story is told in a linear way and doesn't really veer off into unrelated tangents. After a couple of chapters, I settled in and enjoyed the spare, crisp, dreamlike style. The writing is pure, and I felt like I was there, both struggling to get down the mountain, and mastering fear to get through the waves. I don't know anything about surfing or skiing, but the author conveyed the sensations of flying through the world with fear and lightness. He conveyed how the things his father taught him saved him after the crash. This is a fascinating story, and I'm glad I read it.

The Strength Found Within ...

Published by Thriftbooks.com User , 13 years ago
This is an autobiography of Norman Ollestad and his father which focuses on his relationship with his Dad and how his father taught him to find his inner strength, both emotionally and physically, to climb down a mountain and become the only survivor of a plane crash that killed everyone else on board. The book is very well written and quite an eye-opener. Norman, who is an 11 year old boy at the time, and his father are in a small plane that crashes high on a snow-covered mountain. The boy alone survives. This is the story of how his relationship with his free spirited, yet demanding father gave him the tools he needed to make it down the mountain. I was initially irritated by the alternating chapters, however as the book progressed I became more and more interested in the underpinnings of his relationships with his parents, especially his father. I would highly recommend this book, it is a great read!

A FULL-HEARTED BEAUTY OF A BOOK

Published by Thriftbooks.com User , 13 years ago
Sons--give a copy of CRAZY FOR THE STORM to your fathers. Fathers--give a copy to your sons. And everyone else--share this harrowing and luminous story with someone special in your life. Norman Ollestad's memoir has so many things going for it I'm not even quite sure where to begin. The tragic event at the core of the story will be well documented so I'll focus on the book's numerous other qualities. On some level, every son will recognize in himself the relationship between Norman and his father with its profoundly human emotional intricacies--a yearning to please, simmering resentment, subsequent guilt, enduring loyalty and love. Ollestad brings these to the surface in such a truthful way that--as a reader--you can't help but look in the mirror and take some time to reflect on your own journey. I also enjoyed greatly Ollestad's ability to transport me to places I've never been--the sun-soaked beaches of southern California's bohemian surf culture, the ice-capped peaks of the San Gabriel Mountains. You are there throughout with young Norman as he crosses the threshhold into manhood, aided by the wisdom and lessons of his late-father, whom he tragically loses.
Trustpilot
Copyright © 2022 Thriftbooks.com Terms of Use | Privacy Policy | Do Not Sell My Personal Information | Cookie Preferences | Accessibility Statement
ThriftBooks® and the ThriftBooks® logo are registered trademarks of Thrift Books Global, LLC