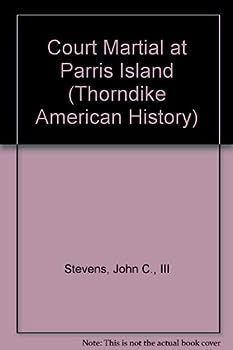 "On the night of April 8, 1956, marine drill instructor Matthew McKeon led Platoon 71 on a forced march through the backwaters of Parris Island in an effort to restore flagging discipline. Unexpectedly strong currents in Ribbon Creek and an ensuing panic led to the drowning of six recruits. The tragedy of Ribbon Creek and the court-martial of Staff Sergeant McKeon became the subject of sensational national media coverage and put the future of the...

An Examination of Military Justice.

Published by Thriftbooks.com User , 14 years ago
This is a lawyer's book -- a good one. In April 1956, a Marine drill instructor led a platoon of recruits on a night march into the tidal waters of Ribbon Creek in the Marine Corps Recruit Depot, Parris Island, South Carolina. Some of the recruits strayed into deep water; six of them drowned. The public news media cried out for punishment of the responsible party. The public furor also was a threat to the continued funding of the Marine Corps. The most obvious target of this wrath was the drill instructor, Sgt. Matthew McKeon, who was all but abandoned by his commanding officers in a rush to judgment. The book follows the ordeal of Matthew McKeon from his immediate arrest and public condemnation by the Commandant of the Marine Corps, through a court of inquiry and then a general court-martial. The author is a retired judge of the family and probate court in Essex, Massachusetts, and also a former Marine who went through boot camp in Parris Island in 1957. In preparation for this book, Judge Stevens reviewed the official records of the government and also conducted interviews of many of the persons involved. Interestingly, the main character in the book is not Sgt. McKeon. The main character is Emile Zola Berman, an experienced New York civil trial lawyer who represented McKeon in the general court-martial without charging a fee. In contrast, General Randolph McCall Pate, the Commandant of the Marine Corps, is portrayed in a negative light and General Wallace Greene, who led the court of inquiry, is more or less given a free pass. The court-martial lasted more than three weeks; forty-eight witnesses testified. There were many rulings on the admissibility of evidence and on strategic and tactical matters. The author does an outstanding job of condensing the testimony and explaining the significant legal issues and trial tactics, even though he sometimes overuses adjectives in that effort. For example, the word "clever" is frequently used to signal that an important concept is about to be discussed. Nonetheless, trials are complex things and there is bound to be some repetition in the telling, particularly where there are two separate but similar proceedings, the inquiry and the court-martial. On the other hand, there is a tendency for the author to make his own determinations in ex cathedra fashion. For example, he flatly states that the law officer erred in allowing testimony of the Commandant of the Marine Corps and the Corps' most colorful general officer "Chesty" Puller because the subjects of their testimony were not properly subjects of opinion evidence. While that is sometimes a valid objection to expert testimony, courts across the country allow such testimony every day. Besides, this was not a trial with a judge and jury; it was a court-martial with a board and a law officer. Suffice it to say that this question - and others - are arguable and it is for appellate authority to say whether or not the ruling was wrong. T

Published by Thriftbooks.com User , 18 years ago
I have not yet read this book, but after reading the reviews, I thought a further recommendation might be helpful. My grandfather, Colonel William B. McKean, was in command of the weapons training battalion at Parris Island when the Ribbon Creek incident took place. He wrote a book about his experiences and impressions called Ribbon Creek. It is out of print but still possible to find through used and rare book stores.

Learning about my father!

Published by Thriftbooks.com User , 19 years ago
I am so glad to have found this book. I am the illegitimate daughter of Charles Reilly whom I knew nothing about since he died one month before I was born. This book not only took me through the trial but also gave me incite to the person he was. Through the years I have only had a home town newspaper article of the incident and was never recognized by his family. I am sure McKeon did not march the whole platoon into the marsh with the intent that some would surely die and do feel that he has been justly punished for his bad judgement on that fateful night. I could almost feel like I was at the trial by the way Stevens writes. As a former wife of a Marine who spent four years living the "life", I, too, would like to see this depicted on film. I would also like to locate some of the surviving members of Platoon 71 who might have more information of any kind about my father.

Published by Thriftbooks.com User , 22 years ago
I was the Platoon right guide and assisted Langone in hurding the guys into the swamp. I was thinking that they were fooling around with the "Help me! " routine. But it was for real, Guys were going down. Mr. Stevens did his homework and produced and admirable piece of work. I look foward to some sort of follow-up on what the rest of the guys are doing. Some say it was our platoon that slightly changed the way the Corps operates at that entry level, but I would like to believe that nothing changed because that is the way it worked before we came along. Mac was just unfortunate that this happened and got out to the press of the 1950's south. Not a very nice place at the time, as I can recall.

Published by Thriftbooks.com User , 23 years ago
This book went in depth, and sorted through the fiction to bring out the real story. I, being very interested in naval and marine affairs have personally researched the event, and this book, more than any other that I have read provided the most information, keeping me hanging on each page with interest. I would recommend this book to anyone who has any interest in the world, history, or who needs a good book that they can be enticed and enthralled in.
Trustpilot
Copyright © 2022 Thriftbooks.com Terms of Use | Privacy Policy | Do Not Sell My Personal Information | Accessibility Statement
ThriftBooks® and the ThriftBooks® logo are registered trademarks of Thrift Books Global, LLC