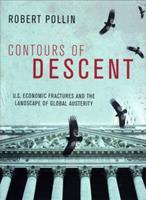 Contours of Descent: Us Economic Fractures and the Landscape of Global Austerity

In the past twenty-five years the free-market neoliberal model has been hailed as a panacea for economic ills in both the advanced economies and the developing world. Pollin dissects this model as it has been implemented in the US during the Clinton and Bush administrations under Greenspan's Chairmanship of the Federal Reserve, and in developing countries under the auspices of the IMF. Clinton's Third Way policies were hailed as combining a pro-business...

Are we all neoliberals now? No!

Published by Thriftbooks.com User , 16 years ago
Robert Pollin's 'Contours of Descent' has been a welcomed addition to the debate over the nature and course of recent American economic history and the policies that contributed in to the making of that history. Pollin provides a well-researched and -argued look at the economic policies of the Clinton and Bush administrations. 'Contours' treats both presidential administrations as instances of Reaganomics in action - that is, as political regimes beholden to the neoliberal consensus that began to form in Washington during Jimmy Carter's term and which the Reagan administration turned into programmatic focus of American economic policy. The New Deal Order might have ended with the Reagan administration, but there has not been a return to a 'golden age' defined by full employment and an equitably distributed abundance. Consequently, Reaganomics or neoliberalism has proven to be an austerity program for the majority in the United States and elsewhere. Clinton and Bush the Younger merely follow their master in this regard. What is most useful in Pollin's analysis is the debunking work it performs. More specifically, Pollin makes it clear that Clintonomics differs from Bush the Younger's 'New Rapacity' mostly in degree but not in kind. The stock market bubble economy of the late 1990s merely obscured the class biases inherent in the administration's policies, biases which Clinton expressed by claiming that he would be an Eisenhower Republican. Pollin's critical work won't prove to be overly useful to those implementing the neoliberal consensus at home and abroad. They will likely ignore it and will continue to greatly exploit whomever they can, whenever they can, notwithstanding the consequences produced by their policies and actions. On the other hand, his analysis should be very useful to those on the left who believe the Clinton wing of the Democratic Party has something to offer in economic matters. It does, of course: It offers a recipe for making the rich richer and the poor poorer! What it fails to offer is a strategic path leading to a full employment and high growth economy in the United States and elsewhere. Pollin sheds a much-needed light on the methods and consequences of neoliberalism. We can only hope that it aids sensible Americans as they make their way out of the Democratic Party.

Published by Thriftbooks.com User , 17 years ago
Read "Contours of Descent: U.S. Economic Fractures and the Landscape of Global Austerity" by Robert Pollin, the co-author of "Living Wage." Pollin is a brilliant economist interested in using economics for the good of our society. He's also ruthlessly honest, and you won't catch him bragging, a' la Dick Gephardt, about the glorious Clinton days. Pollin's critique of Clinton's economic program is harsh and that of W. Bush's devestating. The lessons are clear, and Pollin closes with useful recommendations.

Towards a more equitable, stable and prosperous world

Published by Thriftbooks.com User , 18 years ago
Robert Pollin's "Contours of Descent" is a lucid and coherent dissection of neoliberal economic policies as practiced in the U.S. and around the world. The author very effectively cuts through the political doublespeak of recent U.S. administrations to show that neoliberalism has served as the guiding principle for both Bill Clinton and George W. Bush. Following a careful and methodical critique of the Clinton/Bush record, Mr. Pollin advances an alternative set of policy proscriptions that might lead us towards a more equitable, stable and prosperous world.Mr. Pollin is a Professor at the University of Massachusetts-Amherst. The humanity and practicality that infuses this book is no doubt a reflection of Mr. Pollin's real world experiences, which includes work on developing living wage proposals in various U.S. cities, serving as a consultant to the United Nations Development Program in Bolivia, and as Economic Spokesperson to the 1992 Presidential campaign of Governor Jerry Brown. Neoliberalism is defined by the "Washington consensus" of decreased government spending, free trade and deregulated markets. Mr. Pollin critiques the system for its three major defects: The "Marx problem" pertaining to the relative bargaining relationship between employers and workers; the "Keynes problem" of the tendency of financial markets to engage in speculation; and the "Polanyi problem" of the corrupting effect of corporate power. The author builds a convincing case that all three problems have been exacerbated by neoliberalist policies, resulting in a host of deleterious effects. These include widening gaps between the rich and poor (Marx), speculative bubbles in the financial markets (Keynes), accounting scandals (Polanyi), and others. Moreover, the author provides research to show that the cumulative effect of these policies has been to slow world economic growth, thereby undoing years of progress and preventing many developing nations from significantly raising living standards for their citizens.Mr. Pollin critiques the Clinton administration and Robert Rubin in particular for championing financial market deregulation as the linchpin for its "Eisenhower Republican" economic strategy. The author is presuasive in detailing how the stock market boom of the 1990s provided fuel for the economic boom; unfortunately, its demise quickly erased most of the gains attributed to the Clinton economy, such as a real decrease in the number of persons living in poverty. In fact, the author suggests that the single-minded pursuit of a balanced budget allowed Clinton to squander a historic opportunity to use surplus government dollars to invest in education, healthcare and the environment --programs that the author believes are critical to creating a more durable kind of prosperity for the American people.Mr. Pollin launches a no less scathing critique of the Bush administration's policies, which the author believes have been designed to be little more than a "bonanza to the

What the Democrats won't admit about Clinton-omics....

Published by Thriftbooks.com User , 18 years ago
From "Clintontime" by Alexander Cockburn at (...) We find the liberal populists Michael Moore, Al Franken, Paul Krugman and Molly Ivins all pouring sarcastic rebukes on Bush2 and, categorically or by implication, suggesting that in favoring the very rich and looting the economy in their interests Bush stands in despicable contrast to his immediate predecessor in the Oval Office. So just get a Democrat, any Democrat, back in the White House and the skies will begin to clear again. But suppose a less forgiving scrutiny of the Clinton years discloses that these years did nothing to alter the rules of the neoliberal game that began in the Reagan/Thatcher era with the push to boost after-tax corporate profits, shift bargaining power to business, erode social protections for workers, make the rich richer, the middle tier at best stand still and the poor get poorer. We have just such an unsparing scrutiny of Clintonomics in the form of Robert Pollin's Contours of Descent. Pollin is unambiguous. "It was under Clinton" he points out, "that the distribution of wealth in the US became more skewed than it had at any time in the previous forty years. Inside the US under Clinton the ratio of wages for the average worker to the pay of the average CEO rose from 113 to 1 in 1991 to 1 to 449 when he quit. In the world, exclusive of China, between 1980 and 1988 and considering the difference between the richest and poorest 10 per cent of humanity, inequality grew by 19 per cent; by 77 per cent, if you take the richest and poorest 1 per cent. The basic picture? "Under the full eight years of Clinton's presidency, even with the bubble ratcheting up both business investment and consumption by the rich average real wages remained at a level 10 per cent below that of the Nixon-Ford peak period, even though productivity in the economy was 50 per cent higher under Clinton than under Nixon and Ford. The poverty rate through Clinton's term was only slightly better than the dismal performance attained during the Reagan-Bush years." We had a bubble boom, pushed along by consumer-spending by the rich. The REAL legacy of the Clinton era is that the bargaining power of capital to cow workers, to make them toil harder for less real money, increased inexorably. Speculative rampages were given a green light. At the end of Clinton's eight years, when the bubble tide had ebbed, what did workers have by way of a permanent legacy? Clinton, Pollin bleakly concludes, "accomplished almost nothing in the way of labor laws or the broader policy environment to improve the bargaining situation for workers Moreover, conditions under Clinton worsened among those officially counted as poor." Nowhere is Pollin more persuasive than in analysing the causes of the fiscal turnaround from deficit to surplus, an achievement that had Al Gore in 2000 pledging to pay down the entire federal debt of $5.8 trillion. Was this turnaround the consequence of economic growth (producing higher tax re

Time For A Real Change

Published by Thriftbooks.com User , 18 years ago
This is not only one of the most readable, persuasive, and substantial books I have ever read on the US economy - it also probes well below the surface of much of the current media hype.While Pollin takes on the shameless economic policies of Bush - rewarding the rich at the expense of everyone else - he also argues strongly against Paul Krugman or other apologists for Clinton. Arguing that essentially both Bush and Clinton (and Greenspan throughout) have operated under the same absolute Washington 'Consensus' ideas about the economy, he shows how these ideas have led to greater inequalities in US society and worse conditions for the average American. The fabulous decade (the late nineties) were really just a "hollow boom." He also explains how neoliberalism has been a disaster for the developing world.But its not all gloom and doom. Pollin has a chapter on simple and proven economic changes that could be achieved and which would not only give every American a fairer chance, but would boost the economy at the same time. If you want great background reading to Democrats economic proposals for the 2004 elections - and any real and achievable change - read this book !!!
Copyright © 2022 Thriftbooks.com Terms of Use | Privacy Policy | Do Not Sell My Personal Information | Accessibility Statement
ThriftBooks® and the ThriftBooks® logo are registered trademarks of Thrift Books Global, LLC