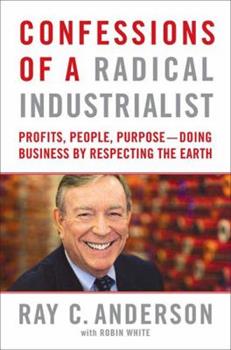 Confessions of a Radical Industrialist: Profits, People, Purpose--Doing Business by Respecting the Earth

In 1994, Interface founder and chairman Ray Anderson set an audacious goal for his commercial carpet company: to take nothing from the earth that can't be replaced by the earth. Now, in the most inspiring business book of our time, Anderson leads the way forward and challenges all of industry to share that goal. The Interface story is a compelling one: In 1994, making carpets was a toxic, petroleum-based process, releasing immense amounts of air and...

Inspiring in time in which it is hard to be inspired

Published by Thriftbooks.com User , 12 years ago
This is the most important book for business leaders that I have read in over ten years. I've heard Ray and many others speak. I've read dozens upon dozens of books on similar topics. I've been to conference after conference. But, rarely have I seen in such plain and clear terms a concrete case for how we can meet the goals of sustainability. While others tell us what's wrong . . . Ray Anderson shows us how to do it right. And, most importantly, he tells us through experience and proven data how we can profit and do well by doing good. Love this book. It is a must read for anyone in business today.

A third option for the climate change debate

Published by Thriftbooks.com User , 13 years ago
Eight years ago, I attended a presentation given by Ray C. Anderson in Ottawa. His demeanour, notably calm, did not get in the way of his message. He did not thump the pulpit like a garden variety demagogue, nor did he machine gun the audience with statistics. Seldom has been the case when I've walked away from a conference speech so impressed by a man given the weight of his words. As with all essential issues of the day, factions have divided into two opposing groups, neither one seemingly interested in swaying the other's position, as though the only options for climate change are denial or support. The levels of vitriol and obfuscation lower a very necessary debate to the very shameless tactics used to stalemate tobacco, gun control, abortion and gay rights issues. Lost in this bludgeoning of public discourse's most basic principles is the requisite sophistication to step back; to seek a third option. Mr. Anderson, by virtue of being one of the few - though growing number of - industry leaders to implement a large scale sustainability program, offers an insider's perspective on his company's creative, can-do culture that has made Interface Inc. an irrefutable example of what can be done when the distraction of warring words is set aside; of the focus and determination needed to be at once a profitable as well as environmentally responsible corporate citizen. And as if that wasn't enough, Mr. Anderson gives us an intriguing vision for an overdue overhaul of industrial assumptions seldom challenged or updated since the 18th century. This book, so important in its description of a comprehensive and sensible approach to industrial sustainability, has garnered so little attention from the mainstream press. Nor have I seen it among bestseller lists. It's as though the opposing factions are trapped in their dumbed-down, black-and-white and oft-times uncivil disagreement because they've staked (undeserved) reputations that would be endangered by a viable third option. Loudmouths do like to yell. Ray C. Anderson is walking the walk, with every subsequent accomplishment relegating the chattering classes to irrelevance.

Published by Thriftbooks.com User , 13 years ago
I've read about Ray Anderson in Natural Capitalism and several other books and articles over the years, so I wasn't sure what more I'd get from reading his book, but it has been a tremendous pleasure to do so. I've found the details of his transformative work at Interface to not only be fascinating from an ecological and business perspective but also to inspire me to look more closely at my own company and how we can transform. If a carpet company can do it, surely an educational company can as well. Thanks to Ray for his vision, his company's tremendous work, and this fantastic book.

Published by Thriftbooks.com User , 13 years ago
This provides strong evidence that when upper management gets excited about something other than purely profit-driven business pragmatics, socially- and environmentally-beneficial results occur along with reasonable corporate growth. "Confessions..." nicely rounds out readings such as Esty and Winston's "Green to Gold," McDonough and Braungart's "Cradle to Cradle," and Epstein et al's "Making Sustainability Work...," adding the details of how it can be done from a manufacturing viewpoint (and how hard it is), which is only briefly summarized in the other works and that don't have the personal "been in industry, done it" perspective that Anderson brings. While it's somewhat self-serving (but deservedly) and a little condescending in its treatment of Anderson's competitors, that pales in comparison to the vision that is detailed and how well his company stuck to it. This is a good, can-do kind of road map applicable to driving the cultural change goals that support environmentally sustainabilty, and is straight from the heart of industry.

Every industrialist should read this (and then some)...

Published by Thriftbooks.com User , 13 years ago
Ray Anderson's memoir is a clear and thorough review of his and Interface's (his corporation) journey up Mount Sustainability. Interface is transforming itself from an extension of the petrochemical industry to a truly sustainable corporation aiming at a zero footprint. I think this memoir illustrates what can be done when you set a seemingly impossible goal and you take it on with intellectual honesty and ingenuity. I think Interface's and Anderson's transformations are an inspiration for personal change as well.
Trustpilot
Copyright © 2022 Thriftbooks.com Terms of Use | Privacy Policy | Do Not Sell My Personal Information | Cookie Preferences | Accessibility Statement
ThriftBooks® and the ThriftBooks® logo are registered trademarks of Thrift Books Global, LLC