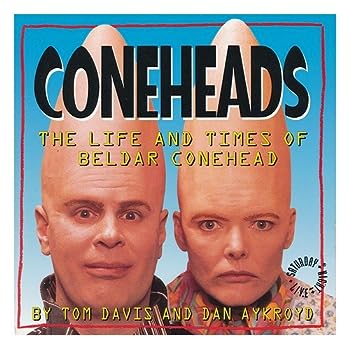 Coneheads: The Life and Times of Beldar Conehead Movie Tie-In

by Dan Aykroyd and Dan Akroyd

A companion to the popular "Saturday Night Live" sketch features a guide to the Coneheads' most often-used expressions, including "Consume mass quantities," "You have stimulated me," and "Mebs." This description may be from another edition of this product.

Published by Thriftbooks.com User , 13 years ago
You've probably been a part of a conversation that started, more or less, as "If you could take one book with you for your year on a deserted island, what would it be?" It wouldn't be this book, for sure. However, I admit that the movie, Coneheads, could entertain me for a long time. This book is a product of the success of the Saturday Night Live skit, The Coneheads. It was written by comedian/writer Tom Davis (of Franken and Davis fame) and Dan Aykroyd, aka Beldar Conehead. A recent column in the New York Post indicated that Tom Davis confessed "...the origins [of Coneheads] included a drug trip he had where his forehead grew 10 inches, a vacation he and Dan Aykroyd took to the statues of Easter Island, the classic 'Childhood's End' by Arthur C. Clarke, and Michaels' directive to 'put it in the living room'." Tom Davis has just released his new book, 39 Years of Short-Term Memory Loss: The Early Days of SNL from Someone Who Was There. The premise of this book is that it is the recollections of ex-INS Commissioner Gorman Seedling in his conversations with Beldar Conehead as they traveled from the planet Remulak back to Earth. Seedling discusses Beldar's childhood, his first (!) experience knarfling the Garthok, his genetobonding with his genetomate, Prymaat, and additional features on Conehead customs, culture, physiology, and behavior. And if you plan to enjoy this book, then... kremnotts.
Trustpilot
Copyright © 2022 Thriftbooks.com Terms of Use | Privacy Policy | Do Not Sell or Share My Personal Information | Accessibility Statement
ThriftBooks® and the ThriftBooks® logo are registered trademarks of Thrift Books Global, LLC