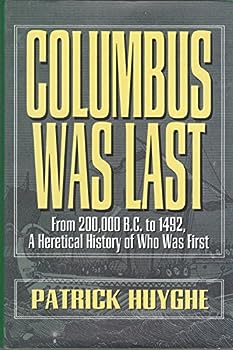 This description may be from another edition of this product. In a spellbinding piece of historical detective work, writer Patrick Huyghe cites authentic archaeological discoveries that prove numerous cultures inhabited America--ranging from the Chinese and...

Sarcasm is not good review

Published by Thriftbooks.com User , 16 years ago
Mr. Reiss's review down there is not to be taken seriously, as you can see by the way he writes. Sarcasm is not a good way to review a book. Especially when you are terribly unknowledgeable about a subject. There are many books dealing with a pre-Columbus European presence in the Americas. Barry Fell is a prime example. You can interpret the evidence in many ways, but the fact is that the evidence is there. Even for large naval groups. Not navel (belly button) forces. This book is a good introduction to the material, but someone who has more interest in the subject matter might want to look up Barry Fell.

Published by Thriftbooks.com User , 17 years ago
Patrick Huyghe has put together an interesting book with "Columbus Was Last." Each chapter deals with the possibility that a different civilization made landfall and, in some cases, thorough explorations of North and/or South America prior to Columbus in 1492. Though it is likely that not all of those mentioned did so (there are 17 chapters in the book), it is also likely that at least a few are accurate. Huyghe provides as much evidence as he can muster for each possibility. And some of it seems to make sense. Pottery connections between different parts of the world, similar cultural practices, similar words for the same object, transplanted flora, etc. I am convinced that a few of the assertions are on the mark. But there are also a few chapters where the evidence seems sketchy at best. Even so, it was interesting to read about them, whether you're persuaded or not. It stands to reason that there had to be at least a few contacts with either Asia, Europe or Africa before 1492 or even 1000 (Vikings). Which ones you believe in are up to you! Four stars. Good "revisionist" history!

Published by Thriftbooks.com User , 17 years ago
Patrick Huyghe, the author of this interesting book, demonstrates that numerous visits occurred in the interval between the First Americans (Native Indians) approx. 50,000 years ago and Columbus in 1492. This book is well written and, although biased toward acceptance of some quite flimsy evidence, presents the arguments on both sides of most exploration claims. Although I was familiar with some of this material, especially the Vinland settlement and St. Brendan's saga, its nice to have a one book compilation of all the possible (and in some cases probable) explorers to reach America well before Columbus. Its amazing to the author, and to me, how archaeologists refuse to recognize any of these visits except for the Greenland Norse ....... and even Vinland was considered a fable until 1960 when Ingstad excavated L'Anse aux Meadows and forced the truth down their throats. Early Japanese in Ecuador (pottery), Polynesians in SA (sweet potato), and Nubian/Egyptians in Mexico (easy drift currents, step pyramids) are shown by Huyghe to be almost certainties. This is a subject that is constantly being revised as new discoveries are made. An updated revision to this book would be nice ........ its been 12 years and I'm sure evidence and opinions have changed somewhat re many of these early visitors.

The Greatest Undiscovered Discovery Book Around

Published by Thriftbooks.com User , 17 years ago
Patrick Huyghe pulls together solid scientific material in a book that is easy to read, scholarly, and still ignored by other authors who cover some of the same areas.Pick up the original...Great read.
Copyright © 2020 Thriftbooks.com Terms of Use | Privacy Policy | Do Not Sell My Personal Information | Accessibility Statement
ThriftBooks® and the ThriftBooks® logo are registered trademarks of Thrift Books Global, LLC