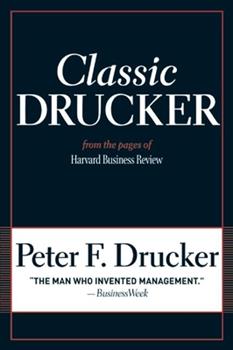 Classic Drucker: From the Pages of Harvard Business Review

For nearly half a century, Peter Drucker inspired and educated managers--and powerfully shaped the nature of business--with his landmark articles in Harvard Business Review . Here, framed by a thoughtful introduction from "HBR" editor Thomas A. Stewart, is a priceless collection of Drucker's most significant work. Through his unique lens, Drucker traces the evolution of the great shifts in organizations and the role of managers in the ongoing effort...

Published by Thriftbooks.com User , 13 years ago
Full disclosure: I'm a big Drucker fan This book will need to sit on your bookshelf. It's a nice compilation of work Drucker has written over his many years. I've got this on my re-read list so basically every once in a while when I need business inspiration I walk over to the shelf and go through his sage advice.

Published by Thriftbooks.com User , 14 years ago
This is one of the best management books I've ever read. Despite the articles being written 10 - 20 years ago, they are still relevant. Drucker uses good examples to illustrate his points, and avoids the word "synergy."

Wisdom for the ages

Published by Thriftbooks.com User , 14 years ago
I found the chapter on self-management alone to be worth the price of the book.

Published by Thriftbooks.com User , 15 years ago
If the name of Peter Drucker sounds familiar, it should: he's inspired managers with his works for nearly half a century, with his articles in Harvard Business Review - gathered here for the first time under one cover and offering his best works to audiences of business learners. From how to remain productive throughout your work life and choose careers which are lasting to learning how and when to make changes, Classic Drucker is a compendium of business wisdom which should be in every business library collection.

Simplicity on the other side of complexity

Published by Thriftbooks.com User , 15 years ago
To me, one of Peter Drucker's greatest strengths as a business thinker is his ability to cut to the proverbial "bone" when sharing an insight about an especially complicated subject. This unique talent illustrates what Oliver Wendell Holmes meant when observing that he didn't "care a fig about simplicity on this side of complexity" but greatly admired simplicity "on the other side of complexity." Given Holmes' observation, consider these three prime examples of "classic Drucker": In 1963: "There is surely nothing quite so useless as doing with great efficiency what should not be done at all." (Managing for Business Effectiveness, page 83) In 1995: "EVA [economic value added] is based on something we have known for a long time: what we generally call profits, the money left to service equity, is usually not profit at all. Until a business returns a profit that is greater than its cost of capital, it operates at a loss...By measuring the value added among all costs, including the cost of capital, EVA measures, in effect, the productivity of all factors of production." (The Information Executives Truly Need, page 107) In 1988: "Information-based organizations, in other words, require clear, simple, common objectives that translate into particular actions. At the same time, however, as these examples dicate, information-based organizations also need concentration on one objective or, at most, on a few. Because the `players' in an information-based organization are specialists, they cannot be told how to do their work...So [such an organization] must be structured around goals that clearly state management's performance expectations for the enterprise and for each part and specialist and around organized feedback that compares [and contrasts] results with these performance expectations so that every member can exercise self-control. The other requirement of an information-based organization is that everyone takes information responsibility...The key to such a system is that everyone asks: Who in this organization depends on me for what organization? And on whom, in turn, do I depend?" (The Coming of the New Organization, page 133) There several other excellent sources of Drucker quotations (e.g. The Daily Drucker) which I frequently consult. However, in the 15 Harvard Business Review articles which are assembled in Classic Drucker, there is a context within which the value of each insight is more clearly indicated. In the Introduction, Thomas A. Stewart (editor of the Harvard Business Review) cites three of Drucker's great gifts to his life work: "First was the talent for asking the right questions...His second gift was to see organizations whole...[Drucker's] third gift was the ability to reason equally well both inductively and deductively." All three gifts are clearly evident in each of the 15 articles. Near the conclusion of an interview by T. George Harris in 1993, Drucker makes several points which seem even more relevant now: "'Democra
Copyright © 2020 Thriftbooks.com Terms of Use | Privacy Policy | Do Not Sell My Personal Information | Accessibility Statement
ThriftBooks® and the ThriftBooks® logo are registered trademarks of Thrift Books Global, LLC