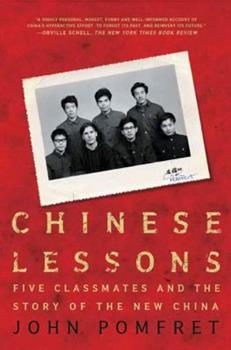 Chinese Lessons: Five Classmates and the Story of the New China

A first-hand account of the remarkable transformation of China over the past forty years as seen through the life of an award-winning journalist and his four Chinese classmates As a twenty-year-old exchange student from Stanford University, John Pomfret spent a year at Nanjing University in China. His fellow classmates were among those who survived the twin tragedies of Mao's rule--the Great Leap Forward and the Cultural Revolution--and whose success...

Published by Thriftbooks.com User , 15 years ago
After I started reading this book, I couldn't put it down until I finished it all. This is by far the best book I've read about China written by a westerner. Many westerners claim to be an expert on China after making a couple trips to China. But this author really immersed himself into Chinese life to have a very deep understanding of china and her people. He shared a shabby college dorm room with a couple other chinese students in the early 80's - I don't think many westerners had this kind of experience. Some people may complain that this book seems only focused on China's dark sides. We have to see China did make lots of improvement in many areas in the past 30 years. Maybe just because all the classmates this book covered seemed to have some personal tragidies. Nevertheless, this book is a still a masterpiece because all the characers in the book are real people. and the author did a marvelous job retelling their story with passion and brutal honesty.

Chinese Lessons: Five Classmates and the Story of the New China

Published by Thriftbooks.com User , 15 years ago
A five star book. To most westerners, China is a huge enigma and this book sheds light on what is happening in China today. Most westerners have some idea of the horrors of the cultural revolution but may not understand how it permeated the lives of most of the educated Chinese. This book tells those stories and how these five classmates of his have fared,and about how new China works today. His personal story is also very interesting.

Published by Thriftbooks.com User , 16 years ago
Chinese Lessons provides great insight into contemporary China, which John Pomfret has learned to know from the ground up in a quarter century of close involvement with the country and its people. Pomfret was 21 when he commenced his studies at Nanjing University in 1980, near the beginning of China's reopening to the outside world after the convulsive Cultural Revolution of the 1960s and 70s. He has since devoted much of his life to reporting on China. In Chinese Lessons, his first book, Pomfret skillfully weaves intimate stories of several Nanjing University classmates together with his own personal narrative as an astute observer of the country's explosive transformation from communist hermit to capitalist factory to the world. The stories Pomfret tells of his classmates and their families stretch back to the revolutionary political movements of the 1950s and 60s and forward to the capitalist present. Through the window of these fascinating lives one sees the corrosive effects of Mao's catastrophic politics on human relationships and beliefs, effects that are still being felt today and will continue to shape the country's future for decades to come. No great familiarity with contemporary China and its recent past is required to be riveted and informed by this compelling book. Highly recommended.

A Book You Can't Put Down

Published by Thriftbooks.com User , 16 years ago
It doesn't happen often that I truly cannot bear to start the last chapter, much less turn the last page, of a book but 'Chinese Lessons' had a grip on me that still won't let go. What a story! I stayed up half the night to finish it and then read parts again. This is a great book and that is not something I ever say lightly. Pomfret's fine-honed skills as a reporter are everywhere in evidence, as well as the depth of research that stands behind his observations and the conclusions he draws from them. He is a wonderfully gifted writer and has the ability to create multiple personalities and whole scenes with an economy of descriptive and effective words. His love of China is coupled with the objective eye of the true reporter and, there again, the professional shows, but unobtrusively. The thing I love most of all is the many ways in which Pomfret is able to teach his readers without any condescension whatsoever while, at the same time, revealing himself as a colorful, strong and fragile man. He is intimate with us and yet ever more impressive. After working in Shanghai twice in the '80s I am now not at all sure I want to return to the China of Big Bluffer Ye but I treasure the memories I have even more and feel I have learned more from 'Chinese Lessons' than I would have absorbed in a lifetime of living there. This book is a never-to-be-forgotten work of brilliant reporting, stirring (and often funny) personal history, and true art. A Standing Ovation for John Pomfret!!!

Published by Thriftbooks.com User , 16 years ago
An outstanding book. There really is no better way to tell the story of China's incredible transformation over the past 25 years than through the lives of a few well-chosen characters. Pomfret delivers, beautifully. In a winning narrative, he skillfully braids the intricate tales of several classmates from Nanjing University, where Pomfret went in 1981, bunking with seven roommates in a tiny dorm room. Together, taking a variety of tracks over the next 20 years, those classmates end up capturing the striking horrors and unpredictable aspirations of the Chinese nation. By keeping in touch with them, as he matures into a first-rate journalist, Pomfret is able to gain a level of intimacy and knowledge about their lives that is unmatched in any narrative about Modern China. His writing is sharp and convivial. His story-telling ability matches the stories themselves, which are unbelievable. Book-Idiot Zhou confides to Pomfret that he was a tormentor, not a victim, during the Cultural Revoluiton. Later, he alternates teaching Marxist history with deal-making in the urine industry. Song, a born Romeo, falls for an Italian woman and has sneak-away trysts. My own favorite was Little Guan, persecuted at age 11 for wiping herself with a piece of paper that said 'Long live Chairman Mao. She is a cheerful fighter, and bucks the odds over and over to succeed. Pomfret is masterful. Armed with a fluent Chinese and a deft pen, he becomes an outstanding journalist, leading the coverage of Tiananmen, being formally expelled from China, and coming back again as Beijing Bureau chief for the Washington Post to establish himself as the dean of foreign correspondents. His newspaper stories were the gold standard of China coverage for several years. In this book, more than anything, it is his extraordinary ability to learn, ruminate and convey the stories of his Chinese classmates that stands out. Highly recommended.
Trustpilot
Copyright © 2022 Thriftbooks.com Terms of Use | Privacy Policy | Do Not Sell or Share My Personal Information | Accessibility Statement
ThriftBooks® and the ThriftBooks® logo are registered trademarks of Thrift Books Global, LLC