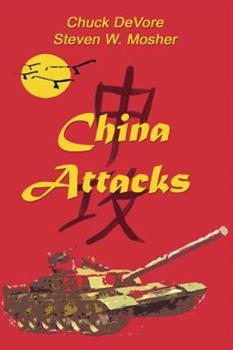 China Attacks is an exciting, entertaining, yet informative novel that explores the international politics that may be leading the world to war, describes America's and China's vast military... This description may be from another edition of this product.

Published by Thriftbooks.com User , 16 years ago
Chinese Maj. Gen. Zhu Chenghu warned in July 2005 that if the U.S. interfered in a Chinese attack on Taiwan it could lead to a Chinese nuclear attack on U.S. cities. Gen. Xiong Guangkai, the Chinese Army's second highest ranking general, made the same threat ten years earlier in 1995, saying that Americans "care more about Los Angeles than you do about Taipei." (Perhaps in a nod to the bellicose senior Chinese general, a sergeant named "Guangkai" is introduced in the first chapter of "China Attacks" then forgotten.) Taking these warnings to heart, Chuck DeVore and Steven Mosher craft a fast-paced tale about a Chinese attack on Taiwan in the near future while America is preoccupied with Iraq, North Korea, and global peacekeeping operations. The most striking aspect of "China Attacks" is the large amount of weaponry that the Chinese can now bring to bear against Taiwan while similarly discouraging American intervention. This carefully researched book makes it clear that the Chinese can successfully invade Taiwan. The book also makes it clear that the U.S. Air Force and Navy can stop the invasion if the American leadership has the will to thwart a Chinese attack on a democratic Taiwan. Lastly, the book suggests that the Chinese can make the U.S. pay a high price to defend democracy in Taiwan. The latest threats from Gen. Zhu keep "China Attacks" a relevant read.

Published by Thriftbooks.com User , 21 years ago
Once I got into it, I couldn't put it down! The battle and weapons descriptions are just right, while the character development is deeper than the usual techno-thriller (I love that one of the lead characters is a young, female CIA analyst.) The plot twists are fun too. At every turn the authors insert a bit of real history and current fact, just enough to add credibility, but never too much to be boring.The authors seem to really know what they're talking about, and that's the scary part!Interestingly, the book is on sale in Taiwan and Hong Kong; that's how I first heard about it.Co-author Steven Mosher's most recent non-fiction book on China, "Hegemon" makes a good companion to this book. I read them both in a week.

Published by Thriftbooks.com User , 21 years ago
At first I wasn't very impressed with the cover of the book BUT the cliche of "You can'tjudge a book by its cover" was created for this situation.I found the first 20 or so pages of character development to be a little slow but they did provided valuable information about the characters as well as historical information about the relations of China and Taiawn that are part of what made this book great. Once the action began I couldn't put it down and practically finished it in one sitting.

Published by Thriftbooks.com User , 21 years ago
This print on demand book took less than 2 weeks to arrive after I ordered it. I devoured it in three days. (Who needs sleep anyway?) Good character development. Fun plot line with many surprises. Kind of like other techno-thrillers, but with more of a human face. In this book, not everything the U.S. does works and not everything the bad guys do fails. The ending was certainly a surprise.Maybe we'll hear more from Devore and Mosher in the future -- if this effort is any indication of how they write, I hope so.

Published by Thriftbooks.com User , 21 years ago
"China Attacks" takes the reader onto the front lines of what may be the world's next major war: China's invasion of Taiwan. Exploring the themes of China's singleminded purpose in "recovering" its "renegade province" while America's global distractions keep it busy elsewhere, "China Attacks" is an engrossing read. If China invades Taiwan in the near future, as the authors' obviously contend may happen, the world may be shocked but the readers of this novel won't be. The book shows how the Chinese can do the job -- and makes it an edge of the seat adventure. It also looks at many of the intagible or unexplored issues of modern conflict: morale, deception, unconventional tactics, and domestic politics.
Trustpilot
Copyright © 2022 Thriftbooks.com Terms of Use | Privacy Policy | Do Not Sell My Personal Information | Accessibility Statement
ThriftBooks® and the ThriftBooks® logo are registered trademarks of Thrift Books Global, LLC