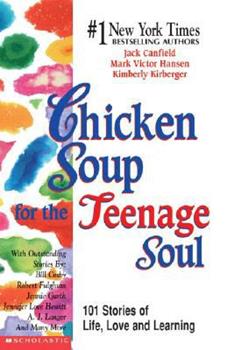 This description may be from another edition of this product. Being a teen is hard - but you are not alone. This book is filled with stories that will make you laugh and make you cry. It will act as a best friend, keep you company, motivate you, and reassure you...

Published by Maddy , 1 year ago
Great Hardcover book. The content is aimed more towards teens Who are growing up in a religious environment and can relate easier to the stories. However, great book for everybody.

Published by Thriftbooks.com User , 13 years ago
I haven't read much of Chicken Soup before -- it never seemed like my kind of thing, I guess. But I've liked and been reading the Teen Ink magazine since the beginning of this year, and when this book came out I thought I'd give it a try. First off, don't judge it for its looks or its title. No, seriously. The writing in here isn't "soupy" or sugar-coated, no matter how smiley the six teens on the cover look. Some of it gets pretty visceral; it's a book by teens with their experiences right now, not just people who WERE teens once upon a time. And it's not half-hearted in describing anything. The writing isn't the same as writing by adults; it's got a fairly different quality about it, not better or worse, just different. It's not pretentious or "trying too hard." I liked that. On flipping through the book, looking at the cover and the little cartoons inside (what's up with those little cartoons?), I have to say I got a little leery. But when I sat down and read the whole thing, I found it as good as Teen Ink magazine itself, and for the same reasons: it's earnest. It's honest. And, as a teen myself, it did feel real.

The Most Touching and Inspiring book I've ever read!

Published by Thriftbooks.com User , 21 years ago
When I first heard about Chicken Soup For The Teenage Soul, I was not in a hurry to purchase or even read it. Later though, my freind bought it and I read a story he told me too. WOW! That one page of what he went through totally changed my perspective on life. I went home and bought the book that night. When I began to read it I relized what I had read was just the beginning of a renewal on the way that I treat and look at my life. Day after day I read a few stories at a time. There were stories that caused my to laugh, cry, smile, frown, get scared, think, and love. If there were more stars beside just 5, I would give them to this book. I feel like this book has renewed so many things in my life that I believe i am a different person. I also have learned many lessons about family, life, freinds, and many many other things. I would recomend this book to anyone that needs a little hope, inspiration, renewal, or just a nice read. Thank yo for your time and if you read Chicken Soup for the Teenage soul I hope that you enjoy, wait, I know that you will enjoy every story in there. Thank You!

When you pick it up you won't put it down

Published by Thriftbooks.com User , 21 years ago
This book was a gift from my mother when I was younger going through my rough times in life. At first I thought that it was a stupid gift and and didn't read it. But one day sitting around board I thought I should take a look after that there was no way to get me to put it down. What really attracted me to it was the very first part was about love, and me being in a new relationship I profited a lot from it. Besides this book teaching us about love it also talks about life and our growing world. It shows us that life isn't always perfect. No matter what you've just been through either a death or a broken relationship, someone has already been there and they got through it and so will you in time. If there was any book I would recomend this would be one of them.

Couldn't Put it down because knowing the stories were true!

Published by Thriftbooks.com User , 22 years ago
I got this book because one day in 7th grade, a girl started to read a poem during a nosiy classroom, everybody, includes the teacher, stopped what they were doing and glues their ears to her words! The poem was so powerful and meanful that it left us all speechless! Right when, I got home I ordered the book. Ever since I got it, it has always been there for me. Whenever I had a problem, I could just open it and fell better. The stories really made you think about what if that was you or I can't believe that is true. I would read and get done with a story and make everyone in the room read it because of how it made me feel. This book is very powerful and I think every teenager should get it!