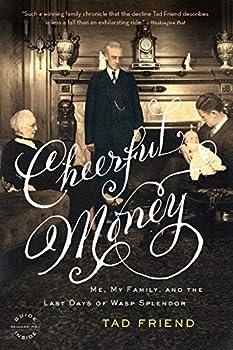 Cheerful Money: Me, My Family, and the Last Days of Wasp Splendor

Tad Friend's family is nothing if not illustrious: his father was president of College, and at Smith his mother came in second in a poetry contest judged by W.H. Auden -- to Sylvia Plath. For... This description may be from another edition of this product.

Published by Thriftbooks.com User , 12 years ago
I kept reading just a page more and then I would put it aside for the long trip I am taking next month. And, then, I read a few more, another chapter...soon I had devoured it all. I am in mourning. Too wonderful to describe.

a book about my people!

Published by Thriftbooks.com User , 12 years ago
Ok- I will admit it: These are my people. I read hilarious parts out loud to my cousin- and he looked blank. Ah! He was raised in California! My Jewish friends also look blank, or look at me sympathetically. It may well be that this book is only interesting to fellow WASPs- and those non-WASPs struggling to understand their WASPy mates. I guess for me it is vindication that our family was not the only one encumbered by these odd culture traits, rituals, shortcomings and apprehensions. I find myself nodding, smiling,or cringing in empathy. Periodically I have to stop reading to wipe tears of laughter away. I admit that it is like looking at a family album belonging to a cousin- all familiar- just a slightly different perspective. Having escaped that world (you kind of have to), I have no problem owning it- and can view my parents and ancestors - and all Tad Friend's family- with sympathy, humor, and horror- all of it. We're all just human. "The full catastrophe" as Zorba would say. This book says it all- which is probably more than you want.

Published by Thriftbooks.com User , 12 years ago
Mr. Friend's writing is beautiful and precise, always, and even more so when he writes about his own family. I find the subject matter of Cheerful Money painfully true, and so appreciate Mr. Friend's honesty and clarity. I also sense echoes of Walter Stegner's amazing novel Crossing To Safety, as well as to George Howe Colt's enlightening memoir The Big House. Mr. Friend's memoir is not just a chronicle of the decline of WASPdom and its influence in 20th American culture, but also a virtuoso portrait of various aspects of human nature. He quotes his Uncle Paddy as claiming that his lovely and haunting portrait of his mother in the New Yorker was not 'gray' enough, too black and white; but almost every 'character' in this memoir is subtly drawn up so that we neither feel too much dislike or like for any of them. Everyone has their own foibles, even if they are WASP's.

Published by Thriftbooks.com User , 12 years ago
Having grown up near various WASP strongholds, I suspect that this is as close to a WASP "tell all" as we shall get. WASPs like to play in mud! Who knew? WASPs are alcoholics! (They were the last to know.) WASPs have emotions, and indeed partake of psychotherapy! A lolapalooza. Ted Friend writes delightfully and well evokes a time both gone by and rapidly passing without mawkishness and yet without a true exposition of the reasons for the once befuddled, now bewildered, WASPs' decline. That, I suppose is the difference between a memoir and a history. Yet I was left wondering what really unseated them from their strongholds of money and power. Their own dissapation, to be sure. The rest, I am not so sure. All in all, this is a delightful book, inviting enough to make me forget the many cruelties that the WASP hegemony wrought.

Published by Thriftbooks.com User , 13 years ago
If you are interested in the many types of Americans that are at home in our country you should read Mr. Friend's recollection of his family. It gives a clear and vivid picture of the monied, established families that used to be "in charge" of the power areas in this society. Because Mr. Friend thinks the time of the WASP (white, Anglo-Saxon, Protestant) is rapidly disappearing, he enjoys recalling what it meant to grow up in this privileged group. The book is not filled with regrets or judgments; it just recalls the experiences that made Mr. Friend an enjoyable writer for today's media. The photographs are a happy addition to the text, as is the family tree which you will refer to to keep track of the generations.
Trustpilot
Copyright © 2022 Thriftbooks.com Terms of Use | Privacy Policy | Do Not Sell or Share My Personal Information | Accessibility Statement
ThriftBooks® and the ThriftBooks® logo are registered trademarks of Thrift Books Global, LLC