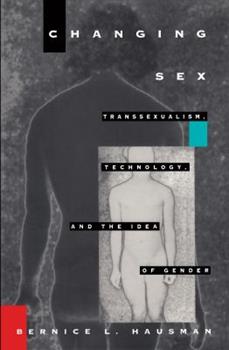 Changing Sex: Transsexualism, Technology, and the Idea of Gender

Changing Sex takes a bold new approach to the study of transsexualism in the twentieth century. By addressing the significance of medical technology to the phenomenon of transsexualism, Bernice L. Hausman transforms current conceptions of transsexuality as a disorder of gender identity by showing how developments in medical knowledge and technology make possible the emergence of new subjectivities. Hausman's inquiry into the development of endocrinology...

Published by Thriftbooks.com User , 16 years ago
In my opinion, Ms. Hausman's book is an outstanding read that looks crtitically not at the transsexual community, but at different scientific sectors (beginning with endocrinologists), and the way in which they shaped the concept of transsexualism as it existed at the end of World War II. It seems to me that the other reviewers here failed to actually look at Ms. Hausman's main argument. In her analysis, the author is not villifying transsexuals but rather the scientific and medical communities. Rather than attacking the construct of gender, Ms. Hausman is going a step further and attacking the idea of *sex* as a constricting dichotomy that doctors and scientists put forth as "truth." By deconstructing this hegemonic notion, Ms. Hausman asserts that the scientific and medical sectors created the 'need' for "sex change" as it was understood when the term was created circa 1940. Also, unlike what other reviewers have said here, Ms. Hausman does acknowledge the fact that forms of 'sex change' have existed throughout human history; however, she realizes that the term 'transsexual' is a modern one, as are the concepts now associated with it, and thus a direct comparison between modern sex change and that of antiquity is neither applicable nor appropriate. I believe it is true that any social idea needs to be analyzed within a historical context, and Ms. Hausman succeeds admirably. She looks specifically at the way in which the evolution of language and understanding within the scientific community have shaped the understanding, and even the identity construct, of transsexualism. Hausman argues that the scientific community has forced transsexuals to adjust to its ideologies; therefore, as a predominantly homophobic community (especially back in the '50s), doctors *required* that their transsexual patients assume a heterosexual lifestyle post-surgery. This is not the case today, nor is this what Hausman is suggesting. Ultimately, I would say that Hausman views early transsexuals as the victims of the medical hegemony that presents the notion of sex as truth. Although this may still be insulting, it is very different from being "anti-trans" or "hateful toward transsexuals." I find this argument (attacking the notion of sex and the way in which everyone in our society is indoctrinated to accept the body as dichotomous) is much more critical of greater society, and affects everyone who complies with this contructed binary

HIstorically insightful: the invention of gender

Published by Thriftbooks.com User , 22 years ago
This historically insightful work should be read by those who are interested in a more historicized, grounded approach to transsexuality than currently circulates in many post-modern critical thinkers' works. Hausman demonstrates the medical construction of gender in the last half century. That this book is ultimately hateful towards transsexuals--despite the protested intentions of the author--should serve as a reminder for all non-transgendered authors writing about trans folk. However, the quality of the research in this book should not be ignored.
Trustpilot
Copyright © 2022 Thriftbooks.com Terms of Use | Privacy Policy | Do Not Sell My Personal Information | Accessibility Statement
ThriftBooks® and the ThriftBooks® logo are registered trademarks of Thrift Books Global, LLC