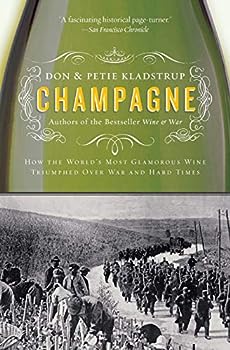 Champagne: How the World's Most Glamorous Wine Triumphed Over War and Hard Times

Throughout history, waves of invaders have coveted the northeast corner of France: Attila the Hun in the fifth century, the English in the Hundred Years War, the Prussians in the nineteenth century.... This description may be from another edition of this product.

A dramatic look at the war-torn history of Champagne

Published by Thriftbooks.com User , 13 years ago
After having read the Kladstrup's previous book, "Wine and War: The French, The Nazis, and France's Greatest Treasure", I knew I was in for a treat when a friend handed me a copy of their latest offering: "Champagne: How the World's Most Glamorous Wine Triumphed Over War and Hard Times". I was not disappointed. The authors have once again given readers a highly enjoyable (and exhaustively footnoted) peek into the history of the Champagne region of France, and the origins of, and dramatic evolutionary style changes in, its namesake wine. Told in a style that's somewhat evocative of Ken Burn's highly acclaimed "Civil War" Epic, we see a countryside repeatedly overrun, looted and destroyed by the conquering hordes of Attila the Hun, the Roman Empire, the Prussians (Napoleonic era), and Germany (WWI & WWII); a countryside at war with itself (first the French Revolution, then riots over outsourcing and regional labeling); and a countryside devastated by vine-destroying pests (phylloxera) and recurring economic hardships (Prohibition, and the Great Depression). From each period, the authors give insightful glances behind the scenes, from the vantage point of growers, winemakers, cellar masters, merchants, soldiers, local residents, and community leaders who are repeatedly driven by circumstances to extraordinary measures - such as staging public protests, evacuating entire communitites into underground limestone tunnels during wartime bombardment, and engaging in armed resistance, and even international smuggling, in order to defend their lives, vines and livelihood. Also included is a refreshing attempt to strip away much of the self-serving disinformation (much of it still repeated even to this very day) surrounding the posthumously exalted Monk, Dom Perignon who, contrary to myth and rumor, was neither blind, nor the inventor of Champagne (which actually invented itself). The authors give the reader a clearer picture of a meticulous man devoted to improving the winemaker's art - techniques such as boosting wine quality by reducing vine yields, improved bottles and closures, and refining techniques to improve wine clarification, and producing white and blush wines from dark grapes (blanc de noir). This is a wonderful book, and a great read. I only have a few minor nits to offer: * SMALL PHOTOS: Although there are 16 pages of black and white photos, all of them are needlessly small, squeezed too tightly into the center of the book, and are unnumbered and not referenced by the rest of the text. * MINOR OMISSION: Although the authors do spend time on the vigneron riots over the unethical practice of re-labeling outsourced wine (which resulted in the AoC laws), they largely overlooked another clash of historical interest - in this instance, the propaganda war waged by the wine industry against non-grape distilled spirits. As I understand history, just as French wine interests began to suffer noticeable production losses (and price in

An interesting angle on history

Published by Thriftbooks.com User , 14 years ago
Champagne's role in history - a fascinating read. I learned a lot. Unfortunately, some of the "facts" presented in the book seem to be stretches. For example, here's a quote from the book: "Champagne was a patchwork of warring fiefdoms whose leaders kept the province in constant turmoil....In 1095 Pope Urban declared "Let those who until now have been moved only to fight their fellow Christians now take up arms against the infidel." With these words, the First Crusade began. His call for a holy war struck a particularly responsive chord with his fellow Champenois, as warlords and others put aside differences and set off for Jerusalem, accompanied by their armies and retinues." The book suggests this was the convenient excuse to invade another country -- to prevent fighting among themselves at home.

Published by Thriftbooks.com User , 15 years ago
A well-written and easy-to-read story of the Champagne region and its wines. My copy of this book has been enjoyed by both drinkers and non-drinkers, but if the former you're get more out of it. Best read with a glass of cold Champagne in hand!

Published by Thriftbooks.com User , 16 years ago
I wasn't certain I would like this book. On one hand, the subject matter is one of my favorites: I could easily drink champagne every day of my life - that is if it were a sensible thing to do and wouldn't pose health risks. There is another matter to the book, though, that scared me off a bit - quite a bit of talk about war. It's never been my favorite subject. But I found here, in these pages, not stories of war, but a glowing testament to the courage of the people, not only the Champenois but so many more. They would die before allowing anyone to take both Champagne and champagne from them. I read, astonished, stories during the WWI of vineyard workers capping bottles, riddling, conducting all processes necessary to the making of champagne in deep underground tunnels, as bomb shells exploded directly above their heads. Personally, I would have enjoyed to hear more about champagne (the beverage), but that wasn't the topic of the book. As another reviewer noted, it did end rather abruptly, but that was as it should be. The subtitle of this book is "How the World's Most Glamorous Wine Triumphed Over War and Hard Times". As Champagne hasn't been attacked since WWII, there really wasn't anything more to talk about. We were lead through all of the battles, from the Huns who lost a battle they should have handily won through World War II. We saw politicking, and also how champagne came to be the wondrous beverage it is today. Reading about the "big" houses who began so long ago and still stand tall today was fascinating reading.

Published by Thriftbooks.com User , 16 years ago
Don and Petie Kladstrup's new book, "Champagne", is a serious but lively romp through the history of champagne...champagne, the drink and Champagne, the region. It is also a revealing look at the French and how they defended what became their national symbol through war and (literally) pestilence. Defend it they did, to their credit and our good fortune. Written as a timeline, "Champagne" begins in the Middle Ages with an almost startling revelation....the bubbles in the wine, so essential to its success and taste in later years, were considered to be a flaw. The drink as we know it today must have borne little or no resemblance to what was consumed hundreds of years ago. The Kladstrups delve into many other aspects of the making and the keeping of champagne which are as engrossing as their narrative....how sediment was handled, the trials and errors of storing champagne so the bottles would not explode, the care of the vineyards, and so on. I was surprised to hear that dry champagne was a rather late development and that its initial offerings were met with resistance as most people preferred their champagne to be sweet. The transportation of champagne is one of the more humorous parts of this offering. As much as this book concerns itself with the product, it is even more a story of people and politics. The effects that wars had on the region of Champagne (and no one really knows where those boundaries begin and end) make it all the more surprising that champagne could ever have survived the onlsaught of armies inflicting a tremendous toll, most notably during World War I, on the vineyards and the people who owned and operated them. The tragedy of the levelling of the city of Reims during the war can be coupled with the infestation of the deadly phylloxera, which ruined crops for years. The recurring theme in "Champagne", however, is the heart of the French people, who have overcome all of these assaults to secure their national pride through champagne. According to the commander of French forces in Reims, "as long as there is champagne here, we will defend it". That quote sums it up in the best possible way. "Champagne" is as delightful a book as the drink itself. In fact, I'd suggest the reader pour a glass or two while reading it. Thank you, Don and Petie Kladstrup for giving us this wonderful history of champagne.
Trustpilot
Copyright © 2022 Thriftbooks.com Terms of Use | Privacy Policy | Do Not Sell or Share My Personal Information | Accessibility Statement
ThriftBooks® and the ThriftBooks® logo are registered trademarks of Thrift Books Global, LLC