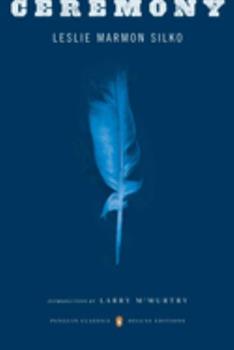 The great Native American Novel of a battered veteran returning home to heal his mind and spirit More than thirty-five years since its original publication, Ceremony remains one of the most profound and moving works of Native American literature, a novel that is itself a ceremony of healing. Tayo, a World War II veteran of mixed ancestry, returns to the Laguna Pueblo Reservation. He is deeply scarred by his experience as a prisoner of the Japanese...

Published by Lynn c , 11 months ago
Will always be one of my favorite novels. The writing is immaculate, gentle swaying prose and an interesting narration this book captivated on all fronts.

Published by Heidi Lynn , 2 years ago
Sad, tragic, and real life for many Native Americans.

One of the greatest American novels

Published by Thriftbooks.com User , 15 years ago
I teach this novel every semester at a university. I have taught it in courses on American Indian literature and in courses on American novels (no ethnic categories). It can stand up against any American novel you can name, in terms of its emotional impact, its artistic achievement, its prose style, its narrative structure -- anything. I admit it is a challenging novel, but it is well worth the work. It is best if you can read it with others, or in the context of a class or online study guide. Some reviewers here are high school students who read it for class, and I admit that may be asking a lot of high school student to dig into the novel as much as it needs/deserves. But that can be done, especially with the right kind of guidance. However, it is hard for me to imagine teaching a university-level course on American Indian literature without teaching Ceremony.

Published by Thriftbooks.com User , 17 years ago
In the book Ceremony, Tayo is a young Native American who is returning home to the Laguna Pueblo reservation after being held captive by the Japanese during World War II. Tayo deals with needing to find a solution to cure himself from the horrors of being held captive. Tayo is traumatized by many things, including being ordered to shoot a crowd of Japanese soldiers and watching his cousin Rocky die, driving Tayo out of his mind. After staying in a Veterans' Hospital for a while he returns to his home, with his Grandmother, his Auntie, and her husband Robert. He returns to the family that raised him after his mother left him at the age of four, giving birth to him by an unknown white man. He suffered the kind of trauma that left it hard for him to have the motivation to survive. What made it even more difficult for him was the fact that other soldiers found comfort in drinking and mindless violence. Tayo needed to search for another kind of way to find comfort and resolution. He finds himself on a journey leading him back to the Indian history and its customs, from its beliefs about witchcraft and evil to the ancient stories of his people. In his search he finds a sense of healing, undergoing a kind of ceremony that overpowers the most dangerous of sufferings and misery. Ku'oosh performs for Tayo a ceremony for warriors who have killed others in battle. However, both Ku'oosh and Tayo fear that the ancient ceremonies are not going to be the solution to Tayo's mental anguish. Tayo is helped but not cured by Ku'oosh's ceremony. Tayo continues his journey of healing and peace through the help of Ku'oosh and the medicine man, Betonie, until he finds what he's looking for. I definitely recommend this book, the quality of Silko's writing is very brilliant in a way that she interweaves the individual stories of Tayo and his people. She includes poems that tell old yet fascinating stories, as Tayo's quest unfolds. You really get into the kind of mental anguish that a veteran goes through after their experience being in a war and what they often have to deal with once they come home. Silko draws out her personal experience as a Native American in this story. She also uses the art of storytelling, a tradition of giving the present awareness of the past. Native American storytelling assures that each version will slightly be changed and modernized for better understanding. Moreover, Silko goes to a certain depth in which she talks about the history of the Natives, giving forth the realizations of the sufferings that they had to go through when the foreigners came and invaded their lands. Through this reading, the readers are given a sense of the author's opinion about her concern in preserving the Natives American culture, its traditions, natural resources, and language, with a combination of awareness and reality of its history under the whites. Silko, herself is also of mixed ancestry, she doesn't blame the whites wholly, she also voices out the mistakes

In writing of the American Indian "condition"

Published by Thriftbooks.com User , 17 years ago
Ms Silko paints a picture, not of historical wrongs, apologetically swept under faded carpets of days gone by, but of contemporary sufferings and injustices, hidden from white consciousness by the remoteness of the reservation system, and quietly tucked away behind white washed institutional walls. It is not a little ironic, that a people so quick to denounce the injustices of an Iraq, or the horrors of the Holocaust, become so indignant when confronted with their own ongoing cultural/ethnic genocide. Yet Silko, herself of mixed ancestry, does not place the blame solely on the shoulders of the whites, she takes Native American peoples to task as well. She chastises those holding tightly to an improvident past, unable to accept changes that are necessary to Indian cultural survival. She is equally critical of those who abandon their identifies, embracing solutions offered by the white man, solutions leaving them in cultural limbo, no longer Indian, and perpetually at the mercy of white prejudice. The key to Native survival in Ms Silko's view, is adaptation, symbolized by the protagonist, Taio. Adaptation which involves accepting the white presence, acknowledging that it is neither good nor bad, simply an unwitting pawn of ancient forces way beyond its ken. Adaptation which at the same time celebrates one's Indianness, its unique way of relating to the land, to things both living, and non, and its special understanding of those forces which the collective white conscious has chosen to forget.

Where have all the decent works of literature gone?

Published by Thriftbooks.com User , 22 years ago
In an age of interactive television, virtual reality, and all other such technological advances, people have forgotten the transportive power of words. Reading Leslie Marmon Silko's CEREMONY is a stirring, mystical experience. Each time Tayo discovers something about the universe and about himself, the reader learns something, too. We are privelaged to be a part of the healing ceremony, to take part in the storytelling. Each time I walk through CEREMONY with my students I am reminded how massive and minute the world really is. To think such a spellbinding and visionary book was written over decade and a half ago!

The Beauty and Power of the Ceremony is indescribable

Published by Thriftbooks.com User , 23 years ago
If you are a reader that tries to read with an open mind, the power of "Ceremony"will simply overwhelm you. The novel opens up a world that is almost completely unknown to the mainstream Euro-American perspective. It is a world of American Indian wisdom that has been maligned, and misrepresented for way too long. On a personal note, this book took me out of the comfort zone that is so guarded cherished by American whites. A white male myself, I too bought the fantasy that nothing exists outside of our middle class life of cars, houses and jobs, and if something does exist, it is "tragic" and not noteworthy. Leslie Silko challenged this assumption in such an amazingly eloquent fashion that I can't help but to be in awe every time that I think about it. While the book makes us uncomfortable, (since it breaks our almost sacred concepts and beliefs) it does not concentrate on increasing the whites' guilt on "how horrible we treated the Indians. "Guilt, however great, leaves us the option of thinking 'Our creations are superior, but we shouldn't have treated these poor stupid people badly anyway.' But it is instead the western-minded readers that are poor/stupid in this book in comparison to Indian wisdom, and that's something that you should be prepared to deal with. After reading "The Ceremony" my life will literally never be the same, for I am now able to look at things around me in a new stunningly amazing light. If you are the type of person that likes to try and put pride and the presumptions of centuries aside, this is absolutely THE BOOK for you to read. But if you are not prepared to say (at least for the purpose of reading) that our western beliefs are not superior to beliefs of other cultures, this book will do little but infuriate you.
Trustpilot
Copyright © 2022 Thriftbooks.com Terms of Use | Privacy Policy | Do Not Sell My Personal Information | Cookie Preferences | Accessibility Statement
ThriftBooks® and the ThriftBooks® logo are registered trademarks of Thrift Books Global, LLC