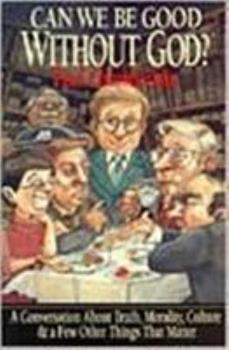 Can We Be Good Without God?: A Conversation about Truth, Morality, Culture & a Few Other Things That Matter

Physician-assisted suicide. Racism. Genetic engineering. Abortion. Poverty. Capital punishment. Our culture is beset by a host of vexing ethical questions. Are there any foundational moral principles to guide us? If so, where do they come from? Christians say that we can--and should--be guided by principles derived from a right understanding of God. But skeptics and those with differing religious convictions argue that ethics and morality need not...

Published by Thriftbooks.com User , 15 years ago
This is an excellent little book addressing the justification for morality in a fictional dialogue. Several reviewers have taken it to task because of its lack of complexity and the fact that it doesn't answer every argument from the non-theistic side. Even though I don't believe these arguments fair any better under the spotlight,the main point is that the book was not intended to be an exhaustive tome on ethics. Criticizing the book for what it is not misses the mark. For people who have read or thought little on the basis for morality this is an excellent introduction to the theistic basis for moral objectivism and a solid critique of the basic arguments against it.

Excellent - for what it is meant to be!

Published by Thriftbooks.com User , 15 years ago
I'm surprised at some of the VERY negative reviews of this book. Some people have approached the book as though it presumed to be a textbook on ethics for graduate students on moral theory. It was clearly never intended as any such thing. It is written as a basic introduction to ethics/meta-ethics from a Christian point of view. It is for the layperson who will probably not graduate with a PhD, and given what it is *supposed* to do, it is neither naive nor shallow. It does the job that it was writen to do very well. It gives the Christian non-scholar a good overview of a variety of positions in ethical theory - necessarily simplified of course, and it reaches a Christian conclusion. I recommend the book to younger readers in ethics or to those who would like to have a handy introduction that simply explains a variety of competing ethical theories and explains what is unique and advantageous to a Christian view of the divine origin of moral truth.

Well written and well thought out.

Published by Thriftbooks.com User , 17 years ago
Contrary to the previous reviewers remarks I found the text to be insightful and helped me to clarify many questions that I have had regarding morality. The author treats the opposing views fairly and raises serious questions regarding their validity.

Published by Thriftbooks.com User , 22 years ago
Chamberlain's book demonstrates the folly of trying to formulate an objective morality apart from an ultimate, absolute and personal standard. The book is entertaining in its Socratic dialogue format. The author gives a fair presentation of the non-theistic systems of ethics and carefully demonstrates why they cannot yield a true morality. Chamberlain doesn't deny that non-theists can be moral. He simply demonstrates why their morality has no rational basis.If you're interested in Christian apologetics of this kind, you might read Peter Kreeft's (Catholic) books, Socrates Meets Jesus, The Unaborted Socrates, and Between Heaven and Hell. All are written in a similar, Socratic style, but Kreeft's are as funny as they are intellectually stimulating. Chamberlain's and Kreeft's books are a great addition to any library.

Better than most philosophy/ethics textbooks

Published by Thriftbooks.com User , 22 years ago
I liked the dialogue idea...it made what I find to be an otherwise boring subject more interesting. I can't think of any other college textbook I have sat down and read straight through of my own free will lately. All in all, a good, solid introduction to the important questions and philosophies of life. If you want to go more in-depth, buy one of the many thick, squinty-small print tomes available on the subject.
Trustpilot
Copyright © 2022 Thriftbooks.com Terms of Use | Privacy Policy | Do Not Sell My Personal Information | Accessibility Statement
ThriftBooks® and the ThriftBooks® logo are registered trademarks of Thrift Books Global, LLC