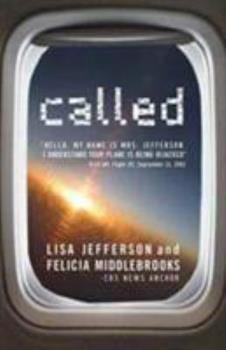 With one ring of the phone, Lisa Jefferson went from being GTE Airfone supervisor, suburban wife, and mother to being the listening ear to a nation shattered by tragedy. "Called" tells the gripping account of 9/11 from her vantage point. She recalls the moment she took the call from Todd Beamer on United Airlines Flight 93, and when she heard the immortal words, "Let's Roll. She remembers the way that her life was transformed vividly when she responded...

Published by Thriftbooks.com User , 16 years ago
This is a must read for everyone, written for everyone. A very easy read. I was amazed and moved to tears by the detailed account of Todd's call taken by Lisa on 9/11/01. I am forever inspired not only by the heroes of Flight 93 but also by the courage of Lisa Jefferson who unselfishly shares her heart and soul in this book.

A Tale of Accidental Heroism

Published by Thriftbooks.com User , 16 years ago
The tragedy of 9/11 brought out on-the-spot courage from ordinary individuals. Lisa Jefferson became one of those heroes. As the gentle and faith-filled operator on the other line of a GTE/Verizon phone call, she never knew that her warmth and courage would be recorded for the history books as she spiritually guided another on-the-spot hero, Todd Beamer into courageous and patriotic sacrifice. Called is not a long chronicle of the events surrounding 9/11--much of that history has already filled the pages of newspapers, bestselling books, and websites. Neither is it an extended treatise on the spiritual life. Instead, we're given the short journey of an ordinary American who stepped up to the call of duty when it was needed. In many ways, Lisa is like you and I--calmly living out our normally mundane lives. But one day we may be called into special duty. Lisa was ready. Will you be?

Called - an easy read with a powerful message

Published by Thriftbooks.com User , 16 years ago
No one should miss reading this book. Poignant in its recalling that terrible day from a very unique perspective, it is even more powerful in how it presents, in Lisa Jefferson's own words, her unswerving faith in God and how He gave her strength she says she did not know she had. This is a must read for anyone wants to understand better what role God can play in our lives, if only we will let Him. Lisa did, and does, and it shows through her words.

Published by Thriftbooks.com User , 16 years ago
My name is Larry Thomas. I bought the book Called, by Lisa Jefferson and Felicia Middlesbrook, and read it in a couple of hours. I couldn't put it down. The book is very well written and I would say that it is just as moving, if not more moving, than any of the films put out about Flight 93. It is very thought provoking. If you don't have a firm belief in God, you can read this book and be truly inspired to be more aware and seek out God, in your own life. This book is an affirmation that we all play a role in God's plan. Thank you Lisa for coming forth and sharing this tender and very personal account of your experience.

Published by Thriftbooks.com User , 16 years ago
Disclaimer: Whoever reads this book should have a box of Kleenex next to them. I read this book in two hours. The only reason why it took me that long is because I was constantly sobbing and had to keep blowing my nose and wiping my eyes. I don't think I've ever encountered a book, at any time in my whole life, which had me crying so hard and having my heart feel so heavy. Lisa Jefferson is the GTE operator who took the call with United 93's Todd Beamer and was the person who recited the Lord's prayer with him as he struggled to make sense of all that was happening on that fateful day of September 11th, 2001. Not only does Jefferson recall the conversation with Beamer, but she also broadens the scope of the book to include the perspective of God's role in our lives and our role in God's life. She firmly believes that we all have a calling to which when the time comes, it is our opportunity to be of service to God. It is truly an inspiring book - one that I could not put down (other than to wipe my tears away) - and is a book that others should read. Honor the memories of Todd Beamer and the other heroes on United 93 by learning more about who they were and what they did for us as a nation, by reading "Called."
Trustpilot
Copyright © 2022 Thriftbooks.com Terms of Use | Privacy Policy | Do Not Sell or Share My Personal Information | Accessibility Statement
ThriftBooks® and the ThriftBooks® logo are registered trademarks of Thrift Books Global, LLC