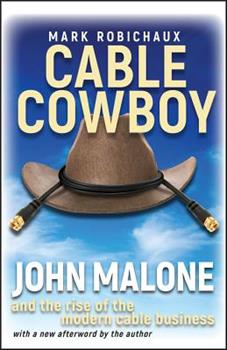 Cable Cowboy: John Malone and the Rise of the Modern Cable Business

An inside look at a cable titan and his industry John Malone, hailed as one of the great unsung heroes of our age by some and reviled by others as a ruthless robber baron, is revealed as a bit of both in Cable Cowboy. For more than twenty-five years, Malone has dominated the cable television industry, shaping the world of entertainment and communications, first with his cable company TCI and later with Liberty Media. Written with Malone's unprecedented...

Who's the man behind the curtain?

Published by Thriftbooks.com User , 19 years ago
I picked the book up with a layman's knowledge of the cable industry and it's origins. I come away with a much broader understanding of both it's origins and significance. The read is smooth and upbeat and really get's to know the man who wired our nation.

A riveting tale of an important influential figure.

Published by Thriftbooks.com User , 19 years ago
Mark Robichaux delivered the inside story of one of the world's most influential and visionary business figures. His narrative takes readers from the wild, wild west to the hallowed halls of Wall Street and everywhere in between. This is a fabulous read that deconstructs the enigma of John Malone. 5 Stars!

The definitive book on John Malone

Published by Thriftbooks.com User , 19 years ago
John Malone is a mogul, visionary, pioneer, and one of the most powerful and influential businessmen of our time. Cable Cowboy tells the definitive story of how Malone built a cable empire and in the process dramatically enhanced the communications and entertainment lives of people everywhere.The author's narrative is riveting, bringing to the life the real-life cowboys who along with Malone built the cable industry one line at a time.

Published by Thriftbooks.com User , 19 years ago
Malone is so pivotal a figure in telecommunications and cable that I'm surprised it took so long for anyone to tackle him. Robichaux has done an excellent job of getting inside the mind of one of the most compelling characters in American business. This one rates a 'must read!'
Trustpilot
Copyright © 2022 Thriftbooks.com Terms of Use | Privacy Policy | Do Not Sell My Personal Information | Accessibility Statement
ThriftBooks® and the ThriftBooks® logo are registered trademarks of Thrift Books Global, LLC